What’s in the Data? HEPI 2018 Highlights

Commonfund Higher Education Price Index (HEPI) data show that inflation for colleges and universities was 2.8 percent for fiscal year 2018, a decline from last year’s 3.3 percent but higher than the average of 2.4 percent for the preceding five fiscal years. Over the past 10 years, FY2018 HEPI was the third highest rate of inflation, trailing only FY2017 and FY2014.1

The following figure shows a graphical representation of the changes in the eight cost factors from FY2014 to FY2018. The chart shows that six cost factors were reasonably stable over the period, rising steadily but not dramatically in any single year. The other two cost factors showed considerable volatility. As mentioned, the most dramatic year-over-year changes have occurred in utilities, which had an inflation rate of 14.5 percent for FY2017, versus -20.2 percent for FY2016 and -13.2 percent for FY2015.

This year, utilities showed the least rate of change in the five-year period, rising 1.7 percent. While supplies & materials spiked in FY2014, exhibiting an inflation rate of 11.2 percent, for the next three fiscal years costs in this component declined by an average of 3.7 percent annually. Costs for this component changed direction this year, rising 2.8 percent. Faculty salaries, accounting for the largest single share of the regression weighting, increased an average of 2.5 percent annually over the period from FY2014 to FY2018 (although we caution that the methodology for this computation changed beginning in FY2015).[1] 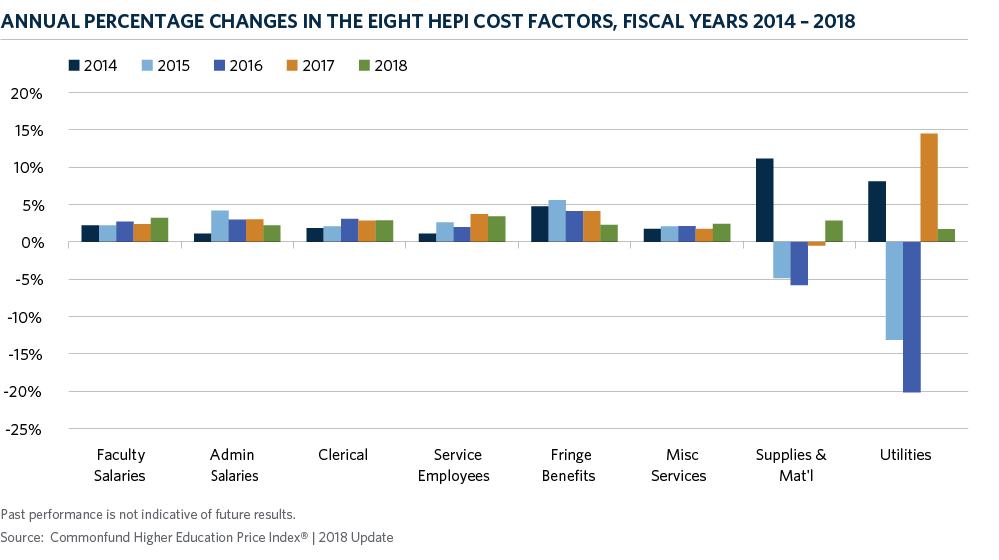