WILTON, CT, December 28, 2020 — Data from the annual Commonfund Higher Education Price Index® (HEPI) show that inflation for U.S. colleges and universities rose 1.9 percent in fiscal year 2020, a decline from last fiscal year’s 3.01 percent rate and the lowest reading since 1.5 percent in FY2016. The FY2020 inflation rate was also significantly below the average annual rate of 2.9 percent for the preceding three years. (Fiscal year 2020 covers the period from July 1, 2019, to June 30, 2020, and coincides with the budget year of most institutions of higher education.)

Year over year, costs in FY2020 rose in six of the eight components tracked by HEPI and declined in two. Faculty salaries, the most heavily weighted component of the index at 35 percent, rose 2.7 percent compared with 2.6 percent in FY2019. Clerical costs, the second-heaviest weighting at 18 percent, rose 3.2 percent, a lower rate than 3.5 percent in FY2019. Fringe benefits, 13 percent of the index, rose 2.9 percent, which was also below last fiscal year’s 3.5 percent increase.

For the first time since FY2016 costs compared with the previous year declined in two categories: utilities, where costs were 15.7 percent lower, and supplies and materials, which declined 3.5 percent. Respectively the two components represent 7 percent and 6 percent of the index. Utility costs have been highly volatile in recent years, declining 13.2 percent in FY 2015 and 20.2 percent in FY2016 only to increase 14.5 percent in FY2017.

Costs for service employees showed the steepest year-over-year increase, at 4.0 percent, but this rate was unchanged compared with the previous fiscal year. Costs in this category have risen an average of 3.4 percent annually for the past five years, the highest among the eight components.

Other cost increases in FY2020 were 1.5 percent for administrative salaries and 2.8 percent for miscellaneous services. The former represents 11 percent of the index while the latter accounts for 2 percent.

HEPI is an inflation index designed specifically for use by institutions of higher education. Compiled from data reported by government agencies and industry sources, HEPI measures the average relative level in the price of a fixed market basket of goods and services purchased by colleges and universities each year through current fund educational and general expenditures, excluding research. A more accurate indicator of cost changes for colleges and universities than the Consumer Price Index (CPI), HEPI is used primarily to project future budget increases required to preserve purchasing power. With compilations dating back to 1961, HEPI offers more than 50 continuous years of higher education inflation data. It is an essential tool enabling schools to determine increases in funding necessary to maintain both real purchasing power and investment. In 2005, Commonfund Institute assumed responsibility for the index and the proprietary model used to calculate HEPI’s values from Research Associates of Washington, D.C.

Comparing HEPI and the CPI, while the former showed costs rising 1.9 percent in FY2020 costs rose in the latter by 1.6 percent, which, by historical standards, was a very narrow spread. For instance, the difference in FY2017 was 1.2 percentage points (3.0 percent versus 1.8 percent) and for FY2016 the gap was more than double (1.5 percent versus 0.7 percent). For the 2019 fiscal year, HEPI showed a 3.0 percent annual increase versus 2.1 percent for the CPI. To learn more about HEPI compared to CPI as an index to more accurately define inflation for colleges and universities and to sign up for HEPI quarterly updates, click here. To access a copy of the complete HEPI report, please visit www.commonfund.org/hepi.

As noted earlier, utilities have been the most volatile component in the index for the past five years (actually, six years when FY2015 is included as costs declined at double-digit rates in three of the six). The only other category to show deflationary changes over the five-year period was supplies and materials, which recorded price declines in FY2016 and FY2020 (and, like utilities, prices fell in FY2015; unlike utilities, price declines were in the mid- to lower single-digit range). 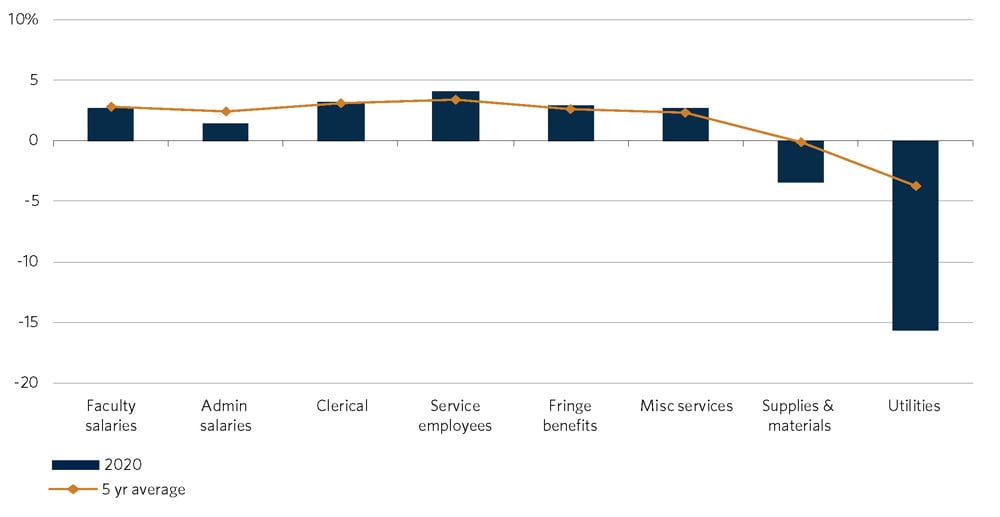 * NOTE: Figure 2 above appears as Figure 3 in the full HEPI report.

Costs regionally and by type of institution

The FY2020 HEPI, which was 1.9 percent on a national basis, ranged from a high of 3.6 percent in the West North Central region to a low of 0.6 percent in the Middle Atlantic region. No other region was above 3.0 percent, the closest being New England with an average cost increase of 2.9 percent. The second-lowest rate of inflation in FY2020 was found in East North Central Region, at 1.4 percent; a year ago, this region had the highest rate of inflation, at 4.5 percent.

Looking specifically at the faculty salary component, HEPI data show it rose 2.7 percent on a nationwide basis in FY2020. Regionally, increases in faculty salaries in FY2020 ranged from a high of 5.0 percent in the West South Central region to a low of 1.2 percent in the East South Central region. Three other regions were above the 3.0 percent level: Pacific at 3.4 percent, West North Central at 3.2 percent and Mountain at 3.1 percent. All other regions were in a range of 2.0 percent to 2.9 percent.

Commonfund was founded in 1971 as an independent asset management firm focused on not-for-profit institutions. Today, we are one of North America’s leading investment firms, managing $24.5 billion in assets for some 1,300 institutional clients, including educational endowments, foundations and philanthropic organizations, hospitals and healthcare organizations and pension plans. Our primary business is investment management, and we are active in all sectors of the global capital markets, both public and private.

.Commonfund Institute houses the education and research activities of Commonfund and provides the entire community of long-term investors with investment information and professional development programs. Commonfund Institute is dedicated to the advancement of investment knowledge and the promotion of best practices in financial management. It provides a wide variety of resources, including conferences, seminars and roundtables on topics such as endowments and governance; proprietary and third-party research such as the Commonfund Benchmark Studies®; publications including the Commonfund Higher Education Price Index® (HEPI); and events such as the annual Commonfund Forum and Investment Stewardship Academy.