The highest annual increases since the inception of HEPI in FY1961 generally occurred in the latter 1970s and early 1980s. The highest rate, 10.7 percent, was recorded in FY1981; contiguous years before and after were the only other years above 9.0 percent. There have been numerous years, however, when the 5.0 percent level was equaled or exceeded although none since FY2008.

The lowest annual rate, an increase of 0.9 percent, occurred in FY2010. That year marked the beginning of a decade when annual increases in HEPI averaged less than 2.2 percent, followed by another year, FY2020, when the increase was just 1.9 percent.

Year over year, costs in FY2022 rose in all eight components tracked by HEPI (faculty salaries; administrative salaries; clerical salaries; service employee salaries; fringe benefits; miscellaneous services; supplies and materials; and utilities), with the most pronounced increases in utilities plus supplies and materials. The former rose 43.1 percent year over year, while the latter rose 21.5 percent. After those, the greatest increase was 8.6 percent in service employee costs. The lowest rate of increase was 2.1 percent in the category of faculty salaries, a rate of increase that, while modest by historical standards, was more than twice FY2021’s 1.0 percent rise. Utilities were also the category showing the highest annual rate of inflation in FY2021, when they increased 15.0 percent. Utilities have been highly volatile, however, as costs in that category declined 15.7 percent in FY2020. Rounding out FY2022 year-over-year changes are the following:

Fringe benefits was the only category to show a lower rate of increase compared with FY2021 (when it increased 4.1 percent). Figure 1 tracks annual changes in HEPI over the last five fiscal years. 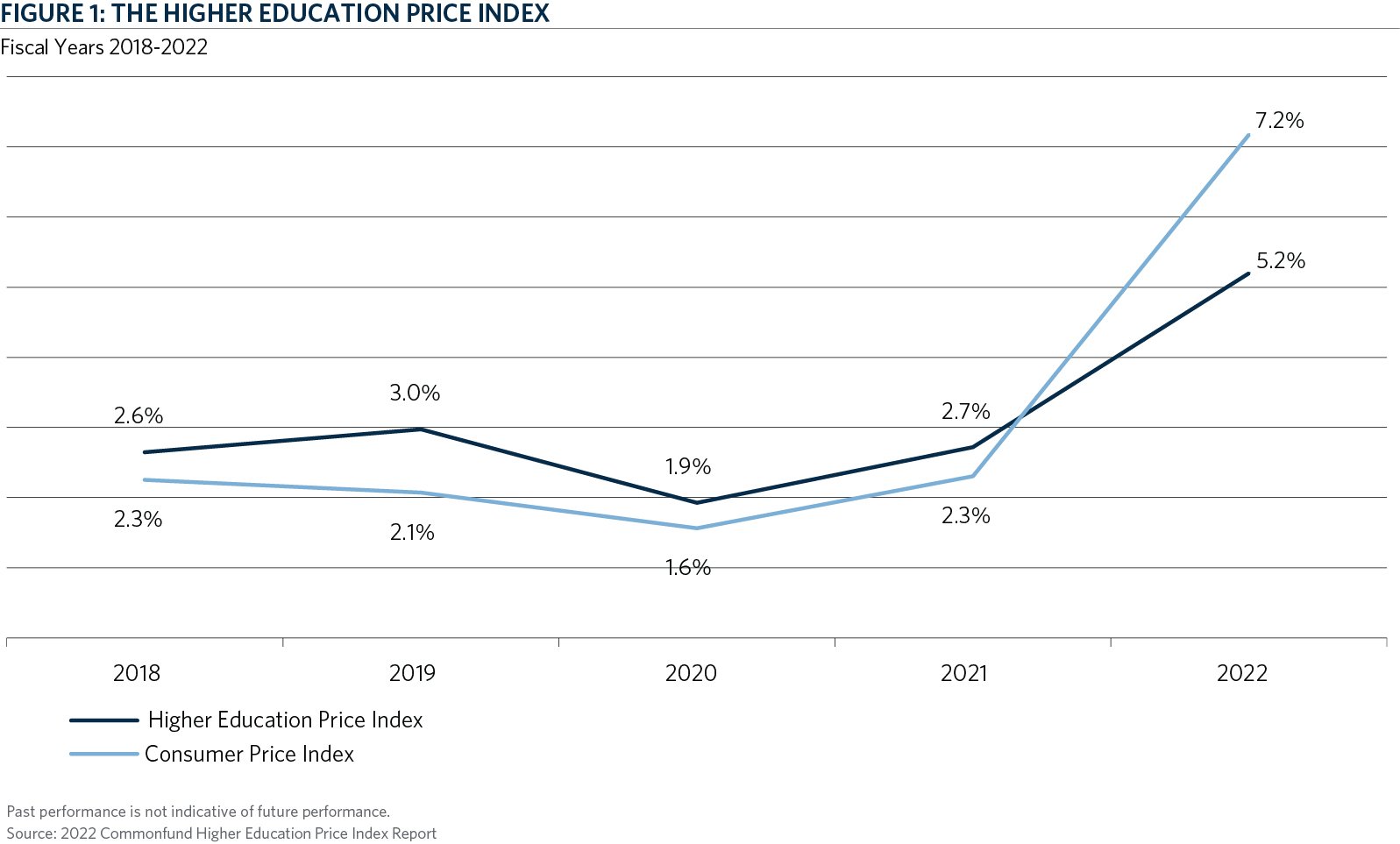 HEPI is an inflation index designed specifically for use by institutions of higher education. Compiled from data reported by government agencies and industry sources, HEPI measures the average relative level in the price of a fixed market basket of goods and services purchased by colleges and universities each year through current fund educational and general expenditures, excluding research. A more accurate indicator of cost changes for colleges and universities than the Consumer Price Index (CPI), HEPI is used primarily to project future budget increases required to preserve purchasing power. With compilations dating back to 1961, HEPI offers more than 60 continuous years of higher education inflation data. It is an essential tool enabling schools to determine increases in funding necessary to maintain both real purchasing power and investment. In 2005, Commonfund Institute assumed responsibility for the index and the proprietary model used to calculate HEPI’s values from Research Associates of Washington, D.C.

Comparing HEPI and the CPI, while the former showed costs rising 5.2 percent in FY2022 costs rose in the latter by 7.2 percent. This marked the first time since FY2013 that the CPI exceeded HEPI, and even then, the difference was just 0.1 percent. Historically, the annual rate of increase in HEPI usually exceeds that of the CPI. For instance, since FY2000, HEPI has increased at a higher annual rate than the CPI 83 percent of the time. (Note: the CPI values reported by Commonfund in this annual HEPI report are based on fiscal year (July 1 through June 30) 12-month averages rather than the monthly (or point-to-point) CPI values usually reported by the Bureau of Labor Statistics.)

On a historical basis, utilities have been the most volatile component in the index. Over the past decade, this category showed double-digit price increases or decreases in six annual measurements and increases of 2.1 percent or less in three others. In 2014, the utilities component was relatively stable, though still elevated, increasing 8.1 percent.

Faculty salaries, the heaviest weighted component of overall HEPI, rose 2.1 percent nationwide in FY2022. While this was just over twice the 1.0 percent rate of increase reported for FY2021, it was moderately lower than the 2.3 percent average annual increase over the past 10 years.

Regionally, increases in faculty salaries ranged from a high of 3.2 percent in the New England region to a low of 0.1 percent in the East South Central region.