Although it has been five years since the collapse of Lehman Brothers—an event that transformed a bad recession into a global financial crisis—the scars of that traumatic episode remain etched in the psyche of many institutional investors.

We have new worst-case scenarios in our risk models and a greater appreciation for so-called “black-swan” or “left-tail” events. Nowhere is this lingering fear more palpable than in the consideration of illiquid investments as investors continue to think through the amount of capital to lock up in “illiquid” strategies. Because of this recent history and uncertainty about the future, we often hear investors ask, “Why should I lock up capital for 10-plus years? And if I should, how much?”

The answers to these questions include the possibility of achieving excess return over more liquid, efficient investment strategies as well as the potential diversification benefit of investing in a universe of smaller companies not available in the public market. Many, including Commonfund, have written about and demonstrated that, historically, an “illiquidity premium” has existed in the past. Moreover, we believe it will continue to exist in the future. The potential for premium returns, however, is not the subject of this article. Instead, we address head-on investors’ misperception about illiquid investments: they aren’t as illiquid as many fear.

For the purposes of this article, we focus on private equity, an investment strategy generally structured as 10- to 12-year partnerships. As such, there is a perception that investors lock up their capital for more than a decade. The reality is that capital is only exposed (i.e., illiquid) for a portion of that time. An investor commits to providing capital for 12 years, yet much of that commitment remains undrawn over the life of the investment. At Commonfund Capital, for example, we typically commit to underlying private equity managers over a two- to three-year period following the final close of one of our funds. Our managers then call capital to invest in portfolio companies over an average period of three to six years. We structure our funds with a 12-year term in order to cover the full life cycle of those underlying manager investments. However, each underlying company (and the resulting distribution) will, on average, have a much shorter lifecycle, as illustrated below.

In order to determine how long private equity dollars are exposed to the market, we quantified the capital call and distribution pace for a fund-of-funds program using several different methods. We selected a U.S.-focused private equity fund as a representative fund for our analysis. This fund was formed in January 2000 as the fourth in a series of multiple-manager, U.S. private equity programs. The fund received $452.2 million in capital commitments from investors. The fund made commitments to 16 private equity managers and has called approximately $439 million, or 97 percent of investor commitments to date. As of September 30, 2013, the fund had distributed $770.9 million to investors, or approximately 1.8x invested capital. We selected this fund since it has experienced a full private equity life cycle. Of course, past performance does not guarantee future results. 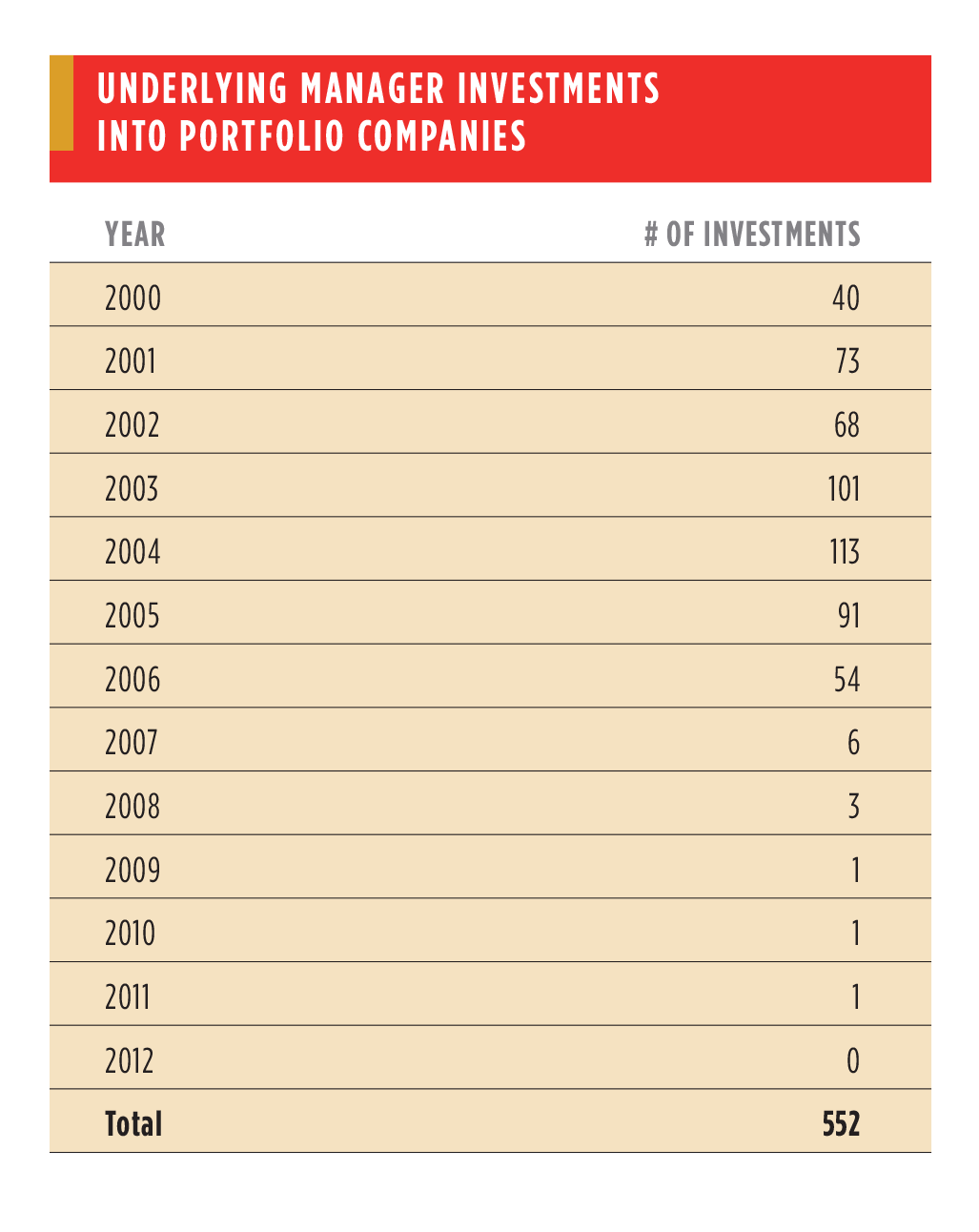 This analysis is for illustrative purposes only, and does not necessarily represent the actual returns an investor may have received.

We also considered broader categories beyond this particular fund, including realized companies across all the private capital funds throughout Commonfund Capital’s history. Over that time, there have been more than 9,600 company realizations dating back to our first venture capital, U.S. private equity and global ex-U.S. private equity funds. These companies have an average holding period of 5.2 years.

TIME BETWEEN CAPITAL CALL AND DISTRIBUTION

Second, we calculated a duration of the weighted average cash flows, using monthly data for the U.S. private equity fund. The fund called capital from investors between January 2000 and August 2007. The average time it took the fund to call capital, weighted by the size of the capital call, was 4.0 years. The fund first distributed capital back to investors in December 2000. The average time it took the fund to distribute capital back to investors, weighted by the size of the distribution, was 8.2 years. The delta between the average capital call and distribution duration was 4.2 years, demonstrating that the dollar-weighted average time between capital being invested and capital being distributed is substantially less than half of the 12-year term of the fund.
The fund began distributing capital back to investors while continuing to make new commit­ments to managers and also making capital calls. The “net capital investment,” or percentage of investors’ capital invested, never exceeded 51 percent of the total commitment amount over the life of the fund when netted against distributions.

Finally, we considered the average time for each capital call to achieve a return of 1.8x to investors, which is our goal for return multiples on our private equity strategies. For this analysis, we assumed the capital committed in the first capital call was returned as the first distribution, much like a first-in-first-out, or “FIFO,” calcu­lation where the first dollar invested is the first dollar distributed. (We note that this would not always be the case as investment time periods vary widely by company.) Using this assumption, we calculated that each dollar invested returned $1.80 (1.8x) in cash back to investors within an average of 4.6 years (weighted by dollars called).
As our analysis demonstrates, it can take approximately four to five years for companies to become fully realized and capital distributed. Below is a table summarizing results of our analyses.

When considering their illiquidity budget and liquidity needs, institutional investors should understand the true illiquidity of a private capital program. The data cited here provides evidence that the actual time investors’ capital is locked up may be less than half of the stated 12-year life of a partnership. The COVID-19 pandemic continues to impact the world in unprecedented ways. There is still much uncertainty including about when a vaccine will be ready and how schools reopening in the fall will...
Private Capital | Articles

COVID-19 is impacting the world in unprecedented ways. Today, it is estimated approximately 75 percent of the U.S. population or, almost 250 million people, are staying at home. Globally, over 1.5...