University of the Virgin Islands

These Buccaneers pursue a different treasure.

There was a time when pirates plied the waters of the Caribbean in the pursuit of gold and other treasure. The Buccaneers mascot of the University of the Virgin Islands (UVI) recalls that era long ago, but today the treasure is vastly different — It’s education…toward that goal, UVI is an institution on the move. 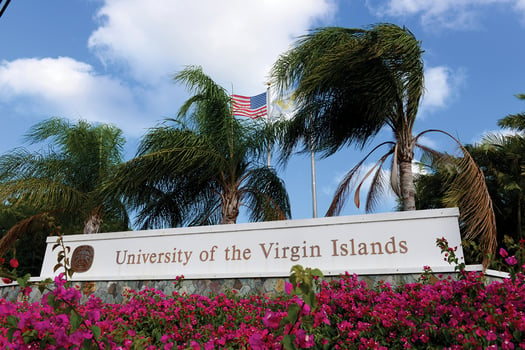 The school recently announced a $30 million gift from Dr. Chirinjeev Kathuria, chairman of New Generation Power, to help establish a state-of-the-art medical school. The gift is key to developing a high-quality medical education program that relies on innovative teaching techniques to produce knowledgeable physicians committed to the Virgin Islands. Another recent gift, of $5 million, is funding the Kiril Sokoloff entrepreneurship program, including an endowed chair and an entrepreneurship competition. Through its Caribbean Green Technology Center, UVI is in the process of establishing a solar energy plant on each of its two campuses. The plants, producing a total of 3.1 megawatts, are intended to reduce dependence on fossil fuels by 50 percent by 2015.

UVI offers 45 undergraduate and graduate academic programs in five schools and colleges: business, education, liberal arts and social sciences, nursing, and science and mathematics. Evidence of academic progress: UVI science, technology, engineering and mathematics (STEM) students are going on to seek doctoral degrees and reaching their goals at rates above the national average (88 percent versus 50 percent). In 2013, five UVI STEM alumni earned their PhDs. Among UVI’s 7,000 alumni are two Rhodes Scholars and a Pulitzer Prize-winning journalist.

Some 2,500 students attend classes on UVI’s two campuses—the Albert A. Sheen campus on St. Croix and the St. Thomas campus. UVI enriches the community of which it is a part by offering arts and entertainment for the territory. The Reichhold Center for the Arts offers world-class performances by international entertainers. The university’s Sports and Fitness Center serves as host for the well-known Paradise Jam Basketball Tournament that attracts NCAA Division I teams.

UVI was founded in 1962 as the College of the Virgin Islands (CVI) by an act of the legislature of U.S. Virgin Islands. The following year, the first campus opened on St. Thomas, situated on 175 acres donated by the federal government. In 1964, the college founded a second campus on St. Croix, on 130 acres also donated by the federal government. In 1972, CVI was awarded Land-Grant status by the U.S. Congress, and in 1986 it was renamed the University of the Virgin Islands to reflect the growth and diversification of its academic curricula, community and regional services, and research programs. That same year, the U.S. Congress named UVI one of America’s Historically Black Colleges and Universities (HBCU), thus giving it the distinction of being the only HBCU outside the continental U.S. UVI’s Foundation (FUVI) supports the University’s educational efforts and provides assistance for special projects and initiatives.