Active minds changing lives. Right-sized, well balanced, with an extensive range of strong academic programs and some enlightening stats that speak to all of it: 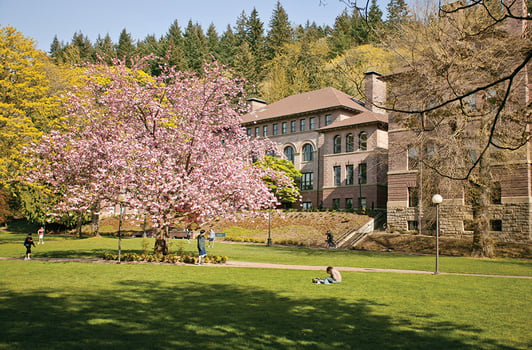 Occupying a 215-acre campus between the water (Bellingham Bay) and a natural second-growth forest (Sehome Hill Arboretum), WWU proudly says it’s not too big and not too small. Its student population is 15,000 strong, 96 percent undergraduate and the student:faculty ratio is 19:1. The diversity of its academic programs traces to its founding as a teacher’s school, New Whatcom Normal School, in 1893.

And diverse they are. Western’s Vehicle Research Institute was described by Automobile magazine as “very possibly the best school in the country for total car design.” Its philosophy department is recognized as one of the best at an institution without a graduate philosophy program. Western’s MBA program was recently ranked in the top 100 worldwide and first in the state of Washington by the Aspen Institute. Its new Institute for Energy Studies, bolstered by a $ 1 million contribution, is an innovative interdisciplinary program that combines science, technology and engineering with economics, business management, public policy and sustainability. The EY Global Mindset Immersion Program, created with a generous corporate gift, is a unique initiative that brings accounting faculty and students together for a shared learning abroad experience.

Western has long been committed to sustainability. Since 2004, when WWU students voted themselves an additional fee, it has purchased 100 per cent renewable energy credits, and it is a signatory to the American College & University Presidents’ Climate Commitment.

WWU’s Foundation was chartered in 1966 and is currently in a major fund-raising campaign, “Western Stands for Washington.” To date, the campaign has raised more than $50 million of its $60 million goal. Half of the campaign goal is dedicated to raising scholarships—a reflection of lower state support f or public institutions. In 2000, the state funded 7 0 percent of Western’s budget; today students fund nearly that much, 62 percent.

Budget dynamics notwithstanding, Western knows it’s in a good place and w ants to share it. Its Compass 2 Campus program has exposed more than 9,000 K -12 students—a good proportion under-represented—to the excitement and promise of higher education. True to WWU’s roots, a teacher’s school never stops teaching.

Blossoms in front of historic Old Main signal spring’s arrival. The building, the first on campus, dates to 1896. Above: Another sign of spring is Back2Bellingham, a weekend when friends, family and alumni celebrate the strong ties between Western and the city.