A sit-down with Richard Fisher

As a follow-on to the Commonfund Forum 2019 panel discussion, The Global Economy and the Return of Risk, Richard Fisher, former President and CEO of the Federal Reserve Bank of Dallas,  further articulated his views on some key points and offered perspective on related issues. 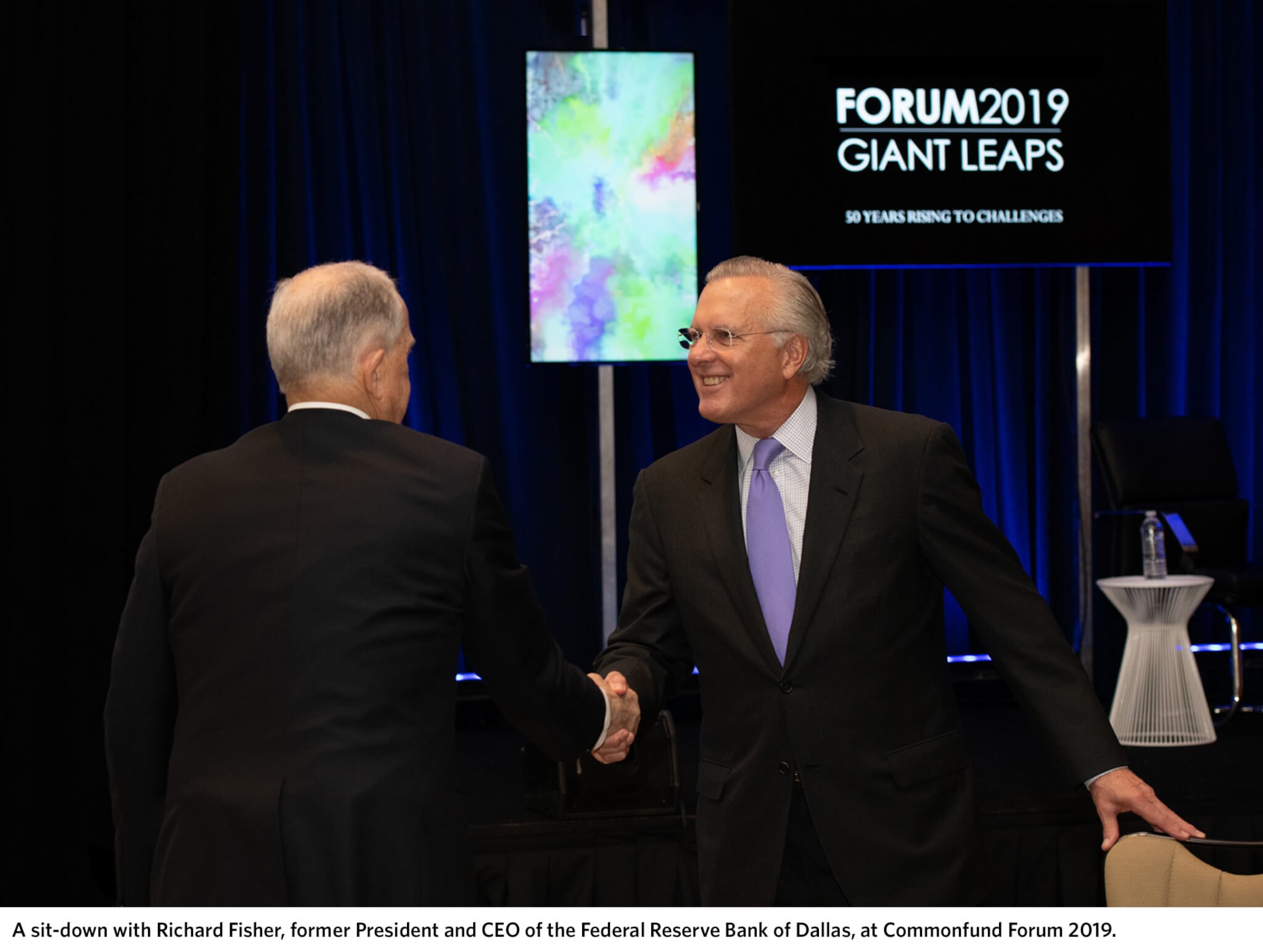 In 2007, you were early in expressing concern over risks in the housing market and, indeed, those risks triggered the financial crisis and Great Recession. After a session with the phrase “the return of risk” in its title, what’s the risk that concerns you most?

In June we’ll have the longest economic expansion on record. Previously, the longest one was 120 months—March of 1991 to March 2001. We’re going to surpass that. Even if the economy slows, we’re still expanding. The question is, what do the central banks of the world do—and I’m talking particularly about the U.S. Federal Reserve and the European Central Bank—when their economies finally turn down? There is such a thing as the business cycle. God hasn’t come up with a solution to the business cycle, and certainly President Trump hasn’t come up with one either, although some of the administration’s policies have extended the cycle. Years of providing cheap credit to the world changes the way future cash flows are discounted and negative interest rates completely distort capital allocation. I have the same worry I had when we started this process: What’s the exit? Janet Yellen started us down that path and I give her enormous credit for it. But if anything, right now the Fed is too sensitive to the markets. Every little word gets dissected. It’s a bit of crude analogy but it’s like someone on a mood stabilizer—what happens when they come off? Who knows? That’s my greatest concern right now.

Some pundits have said the Fed should continue to raise rates if only to be able to lower them more aggressively should the economy falter.

I advocated this starting fairly early in 2015 while I was still CEO of the Federal Reserve Bank of Dallas. The Fed is not a good forecaster. And the Fed is also constrained by the fact that it knows, at least by my count, there have been 14 tightening cycles since World War II. In 10 of those 14, the Fed pushed the economy over the edge. If you think about the way they tried to deal with inflation back under Arthur Burns (Fed chair from 1970 to 1978), they tend to dissect whether the economic dot plot is forecasting 2.1 percent or 2.3 percent. The real question is, what is the direction? Right now the direction is continued expansion, but at some point the economy will fall of its own weight. What do we do then?

You believe the Fed should take a broader perspective?

I’m driven less by theoretical economics because that’s not my background. I ran a hedge fund, I was in distressed debt. So, I have some biases. I’m a markets operator—or was for much of my career—and I believe markets overshoot. I think this market has overshot. When I attend meetings everyone wants to know, What’s the Fed going to do? It concerns me, that dependency. The benefit for us in markets that are so liquid and fast-paced is that we’re the U.S. dollar. As I said during the panel discussion, there’s no horse in the stable as beautiful as ours. Still, we need to rely on more than blind faith

There was an exchange during the panel discussion that seemed to suggest we would have ended up in the same place we are now even without all the quantitative easing.

I don’t agree because in between we would have had a depression. I can tell you how bad it was because none of us slept for what must have been 18 months. Constantly we were worried about whether we had done the right thing. I mean, we were on the brink of total collapse. Remember, every counterparty in the capitalist system disappeared, not just commercial paper. There was nobody on the other side. It was the first time that a money market fund in the U.S. broke the buck. So, we stepped in and got through that.

Where are you on the federal debt: bombshell or bombast?

I’ve been worried about this for over 40 years. The man who trained me was Robert Roosa of Brown Brothers Harriman. He taught me to worry about deficits, and I’ve been worried about them since. That’s why I said during the panel discussion that it doesn’t matter if you’re a Republican or Democrat, you like to spend money. If you’re a Republican you don’t enjoy it as much as Democrats do, but you still do it. That’s why I’m glad we have an independent central bank. Remember, Ron Paul and Bernie Sanders wanted to take away the Fed’s license to run monetary policy and have Congress do it. Can you imagine that?

The Trump tax cut came up during the discussion. Once the corporate rate was lowered a lot of stock buybacks ensued but not so much flowed into capital investment. Where are you on that?

I think we may be underestimating the level of capital investment. For instance, we really don’t have a good measurement of investment in software the way we do with investment in things like copper wires and infrastructure. Economists use a term, “multifactor productivity,” to compare the output of goods and services produced to the inputs needed to produce them. Recently, that has been on the rise and that’s a good thing. But there’s another factor to consider—regulation—and it’s a big deal. From multinational corporations to the dry cleaner down the street, businesses have been overwhelmed. Even small businesses I know have had to hire compliance officers. They don’t have the money left to expand. So, hats off to this administration for reversing the tide that was drowning us in regulation.

Late last year on CNBC you said the “horrifically bad” primary and secondary education system is the biggest threat to the U.S. economy. Given that a large share of Commonfund’s work is focused on higher education, we wonder if you would expand on that thought.

We have some unique secondary schools—the Andovers and Exeters of the world. And we have the greatest university system in the world. People come to America to get the best education, and I say this as having gone to Oxford. What troubles me is what happens in our public school system, primary and secondary. We graduate people who can’t read or write. They can’t do four-function math. Let me give you an extreme example. Let’s say China wins the race for 5G and AI and in the end dominates the language of the Internet. That means, for example, that air traffic control, which is conducted in English around the world—including in China except on the military bases—will become Mandarin. Now, look at our inner-city schools—do you think those children have been educated in a way that gives them the capacity to take on such a dramatic change and learn another language? Or the mathematical skills … if you’re driving a Frito-Lay truck, you’re running inventory. I can tell you, being on the board of PepsiCo, it’s challenging to find people with the basic skill set. So, that’s the Achilles heel of America. I don’t know what we do about it because it’s not under federal control. It’s state and local. But we’re way behind the curve. But deep down, I just have such faith in this country. Instead of keeping me awake at night, that’s what helps me sleep.