The Commonfund community was shocked and saddened this week by the news of the sudden passing of our former President and CEO, Verne Sedlacek at the age of 67. 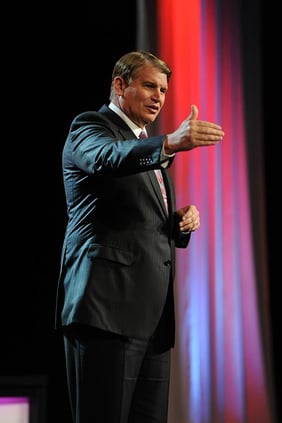 Verne cared deeply about Commonfund, its clients and employees, and his legacy is one of commitment to our mission and the more than 1300 institutions we serve. He joined Commonfund first as Chief Operating Officer in 2002 and then served as President and CEO for 12 years, guiding the firm and our investors through some of the most challenging times in the financial markets.  But he was part of the Commonfund family for much longer, beginning as a client from his years at Harvard Management Company, and serving as a member of the Commonfund President’s Council and as a trustee of one of our clients until his passing this week. In all, Verne was an important part of Commonfund for more than three decades.

To those who knew Verne well, he was a presence that fit his physical stature. He was a humble man and one of great intellect, compassion, and empathy, always putting the needs of others above his own. And he was highly competitive and pushed us all to new heights, making each of us better. Verne never accepted complacency, reminding us always that Commonfund served a higher purpose in the investment community. He loved to teach and challenge conventional thinking – and those who attended Commonfund Forum, or the Endowment Institute at Yale were always treated to a surprise from Professor Sedlacek.

We have lost a towering intellect, a mentor, a boss, a colleague, and a dear friend. Our heartfelt condolences go out to his wife and his two sons whom he loved unconditionally. Verne was known to say that memories were the only things guaranteed to appreciate in value over time. Verne, you will be missed but our fond memories of you will appreciate in value forever.

Below is his official obituary:

Verne O. Sedlacek died suddenly of a heart attack on December 10, 2021, while vacationing in the Caribbean. Maura, his loving wife of 40 years, was by his side. He was 67 years old. Verne was a proud native of Havre, MT, where he was born May 20, 1954, to Vernon and Signe (Martinson) Sedlacek. He graduated from Havre High School in 1972. During his time at Havre High, he was a starting offensive tackle for the Blue Ponies football team, which won the Class A State Championship in 1970.

Verne attended Princeton University, graduating in 1976 with a Bachelor’s degree in Economics. While playing football at Princeton and hospitalized with an injury, Verne met his future wife, Maura Mitchell, who happened to be working as a nurse in that same hospital. They were married in the Princeton Chapel in October 1981, on a day that Verne called the happiest day of his life.

After graduating, he was employed by Arthur Andersen & Co. in New York City in their Audit Division while simultaneously studying Accounting at the New York University Graduate School of Business. After working with investment and Wall Street firms as clients at Arthur Andersen, Verne entered the world of investment management himself after being hired by Harvard Management Company, which manages Harvard University's endowment, in 1983. He worked there for 15 years, ultimately serving as Chief Financial Officer and Executive Vice President. Verne moved with Maura to Boston, where their family became complete with the births of their two sons, Ryan and Connor. It was shortly thereafter that he developed his lifelong passion for the Red Sox, Patriots and Celtics.

In 1998, Verne was hired as President of the John W. Henry & Company, an investment management business based in Westport, CT., to which Verne and his family moved shortly thereafter. Since then, he has resided in Westport, and his family still lives there today, having established deep roots in the community.

In 2003, Verne became the President and Chief Executive Officer of Commonfund, a not-for-profit organization providing investment management, advisory and consulting services to nonprofit institutions (primarily colleges and universities) in nearby Wilton, CT.

Verne was highly respected in the investment and endowment management fields for his insights and ability to identify and anticipate important trends affecting those industries. In 2013, the National Association of College and University Business Officers awarded Verne the Rodney H. Adams Endowment Award for his outstanding individual contributions to professional development activities in the area of university endowment and investment management. Verne was a steadfast believer in the power of philanthropic giving, responsible management and altruistic investment to ensure and improve the accessibility and quality of education for current and future generations.

Verne retired in 2015 but remained active on several boards of directors for financial, investment and educational organizations, providing investment and endowment management consulting services to several organizations. Verne had served on the board of the Chicago Mercantile Exchange and on the Association of Governing Boards of Universities and Colleges. At the time of his death, he was a senior fellow with the M.J. Murdock Charitable Trust in Vancouver, Wash., on the investment committee for the William Penn Foundation, and on the Dean’s Advisory Board of the Ancell School of Business at Western Connecticut State University. He was also a member of the boards of the Thrivent Mutual Fund Complex, Valparaiso University and the Museum of American Finance in New York City.

Verne was a devoted husband and father as well as a loving and generous man. He enjoyed annual beach vacations with extended family, date nights with his loving wife, and watching movies and Boston sports with his sons. Verne loved watching TV (from WWI documentaries to American Ninja Warrior) but also reading: he was rarely seen without a book in hand. His competitive nature was legendary in the family– whether it was football, ping-pong or Monopoly, he always wanted to win and would do whatever it took to do so. He was known to friends and family for his quick wit and self-deprecating humor, as well as his deep humility and heartfelt concern for the people around him.

Verne lived a full life dedicated to his family and friends and considered himself a very lucky man. He is survived by his beloved wife, Maura, sons Ryan and Connor, his brother Stuart, and many loving members of his extended family. He is preceded in death by his parents, Vernon and Signe Sedlacek. His absence will be felt by his many friends and colleagues.

A funeral will be held in honor of Verne at St. Paul Westport in early January at an undecided date. Further details will be forthcoming.