The inclusion of diverse managers in institutional portfolios offers access to a broader array of investment talent. Data indicate that foundations are beginning to recognize and act on this opportunity.

Diversification is the bedrock on which investors build their portfolios. Now another kind of diversification is emerging as a complementary principle. In the 2020 Council on Foundations—Commonfund Study of Foundations (CCSF), data show that foundations are beginning to reflect the growing interest in the investment industry to invest through diverse managers. 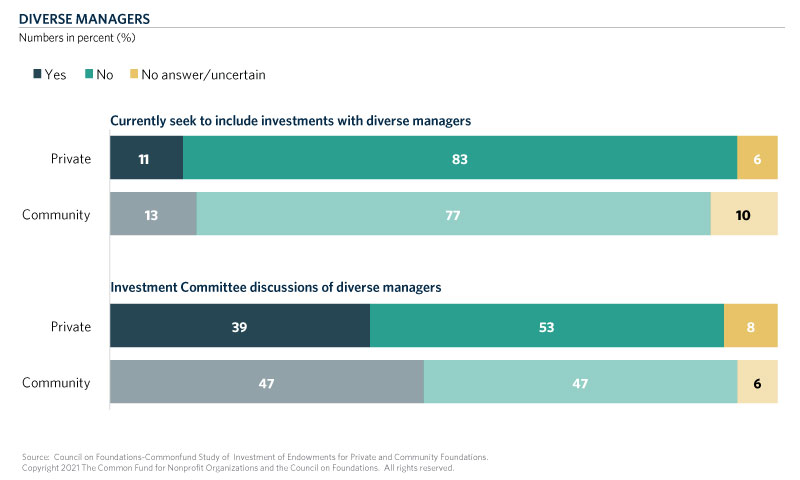 Diverse Managers in IC Discussions and Considerations for Inclusion in IPS

Diverse managers as a topic of investment committee discussion grew significantly over the two-year period, reaching 39 percent of private foundations compared with 20 percent in 2018 and 47 percent of community foundations versus 37 percent two years ago.

Responsible investing continues to evolve and along with it so does one of its key components, investing with diverse managers. A recent survey of diverse manager initiatives found that more than 50 percent of institutions surveyed noted “some level of interest and increased engagement with diverse managers” (Aon Institutional Investor Study: Diverse Investment Initiatives, 2021). The most important step will be converting interest into action. Future CCSF data will serve as one measure of progress among foundations in this area.