It was another taxing weekend (literally) at Commonfund as we digested 1,097 pages of the conference agreement for the tax reform bill (the “Tax Act”) and its implications for our country and for the nonprofit and public sector investors we serve.

We focused on the Tax Act’s provisions, but also its wider goal of stimulating economic growth. We also attempted to discern the implicit preferences and philosophy of this first piece of major legislation from our nation’s 115th Congress, which is expected to be passed later this week, and its implications for public policy in the years ahead.

The Tax Act appears to be more generous to corporations than to individuals. This signals a business policy preference by the Administration and Congress, as business investment represents 13 percent of the U.S. $19 trillion economy, while consumers represent more than two-thirds.

Supporters of the Tax Act hope that it will stimulate the economy by promoting business investment and ultimately increasing consumer spending. Congress is acting at a time when, in the aggregate, businesses and consumers have recovered from the financial crisis, and corporate profitability and household net worth have reached all-time highs: 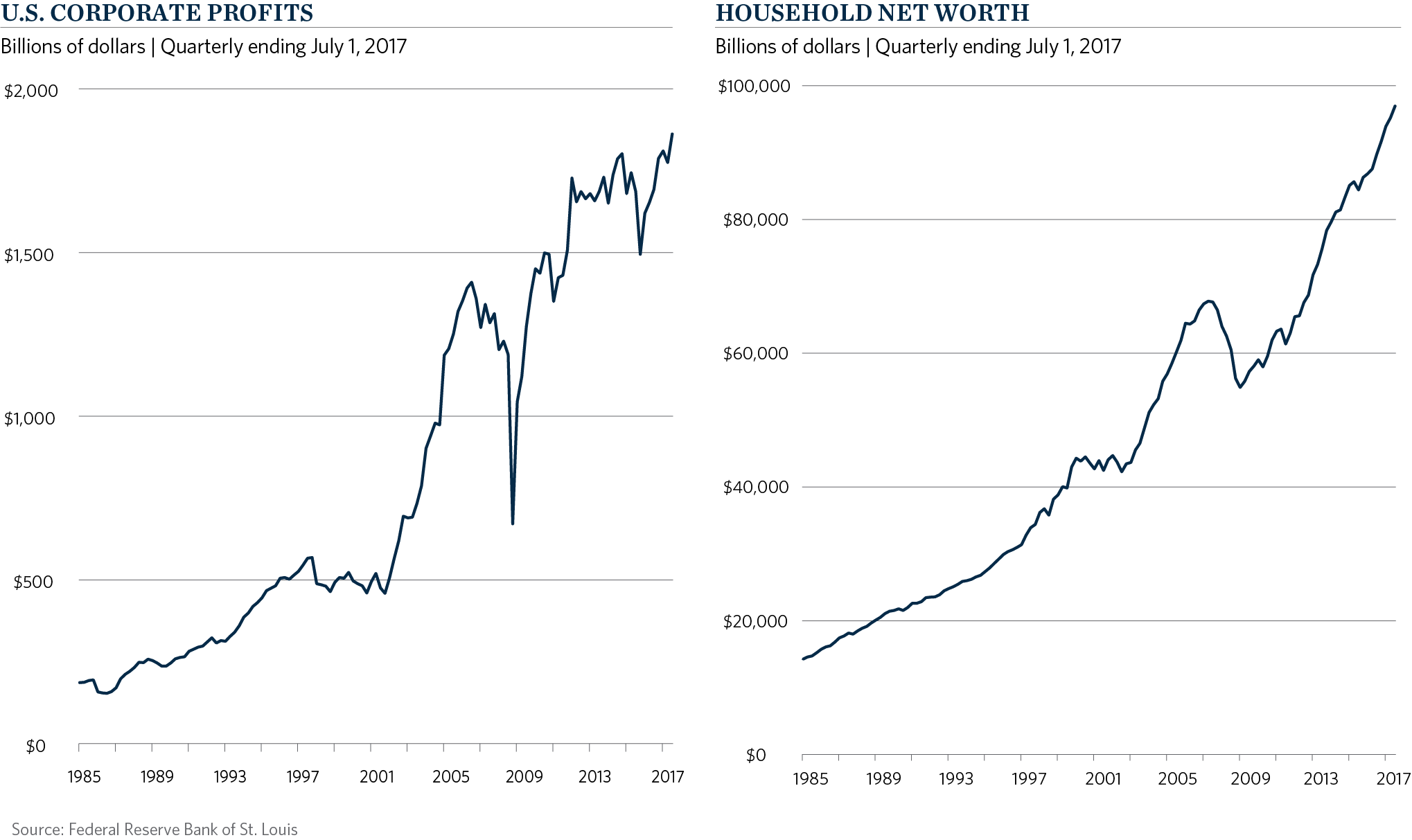 Businesses have many constituents, including employees, regulators, communities, and shareholders. But the one constituent to whom a company, its board and its officers owe a fiduciary duty is its shareholders. Given this fiduciary duty, we expect that shareholders will be significant beneficiaries, including through higher profits, increased dividends and more stock buybacks. As we have shared previously, we expect that the tax cut will contribute to higher earnings with an increase of eight to ten percent likely next year directly attributable to tax cuts. Beyond the corporate tax reductions, the Tax Act intends – as signified in its title – to stimulate job and wage growth through further business investment. Our investment teams will be monitoring job creation and wage growth and their potential to impact inflation.

Unlike the corporate tax changes, the individual tax cuts in the Tax Act are temporary and will sunset at the end of 2025. Most taxpayers will see modest tax reductions due largely to lower rates and changes in the AMT. However, the limitations on deductions for state and local property and income taxes, mortgage interest and home equity loans, as well as the repeal of the individual mandate under the Affordable Care Act (which is expected to lead to an increase in health care costs as healthier participants drop coverage) are significant. Taken together, the magnitude of the tax benefits to individuals, offset by potentially higher healthcare costs, is estimated to be less than $1 trillion, or less than half that afforded to businesses. 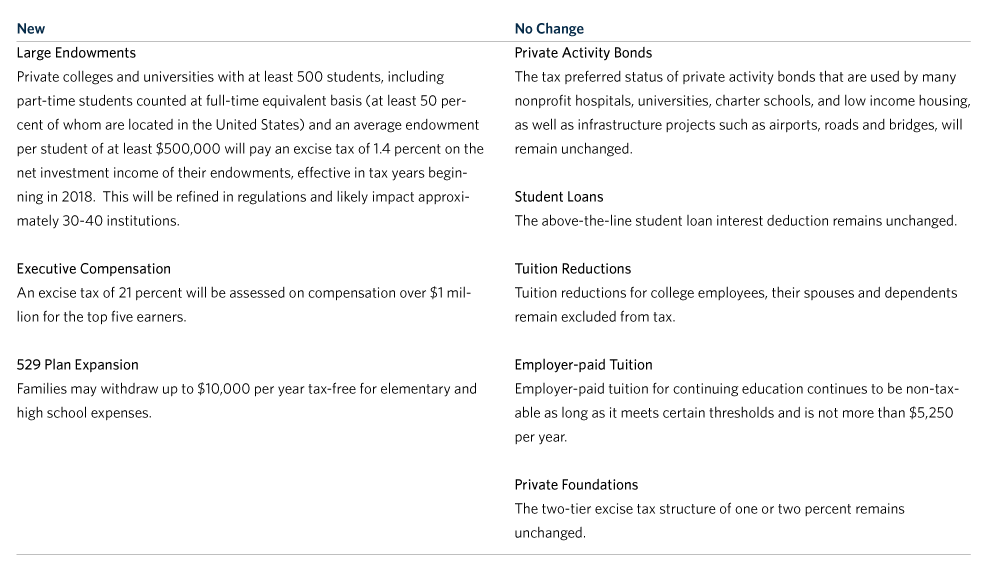 More broadly, the impact of the Tax Act on nonprofits is likely to be felt as a derivative of the increase in the standard deduction. Data informs us that itemizers are far more likely to donate to charity than non-itemizers. In fact, 83 percent of itemizers report giving to charity compared with only 44 percent of non-itemizers. Non-itemizers contribute less than 20 percent of total charitable giving. The Tax Policy Center released a study in November that estimated this legislation could decrease charitable giving by $12.3 – $19.7 billion in 2018.2

At Commonfund, we believe that the Tax Act is the most significant package of tax changes for companies and consumers since the Reagan-era changes of 1986, and for nonprofits since the Nixon-era changes of 1969. It is generational change. It reveals an implicit economic preference of the 115th Congress: a preference for businesses over other segments of the economy, including consumers, government and large nonprofits. It also suggests a philosophy of cultural self-reliance, reflected in a myriad of ways including the repeal of the individual mandate, limitations on deductions of state and local taxes and mortgage interest, expansion of savings incentives under 529 plans, and maintenance of current personal retirement savings incentives.

We will not know for years whether the Tax Act succeeds in its goal of growing our economy in a sustainable way. But we know that our clients in the nonprofit and public sector support those who are not in businesses and who may not be self-reliant: our citizens who need education, healthcare, public safety, secure retirements, and art and culture in their lives. This work has always been important, and will be even more important as our society and economy adjust to a generational change in taxes, preferences, and philosophy.

An Ongoing Commitment to Mission: CPI Plus More

The nonprofit and public sector investors we serve at Commonfund have the longest time horizons but also the highest return targets. Their returns need to exceed inflation plus annual distributions in the range of five percent, or in our investment shorthand, “CPI plus 5.”

Looking ahead, we are cognizant of potential unintended consequences and excluded beneficiaries of the Tax Act. We are approaching the tenth year of the post-crisis recovery, with business profits and household net worth at all-time highs, and interest rates still near cyclical lows. We hope that Congress succeeds in stimulating business investment and consumer spending, and growing the economy for all.

We are also aware of the cyclical implications of the Tax Act. It benefits companies and their shareholders, who have been significant beneficiaries of loose monetary policies over the past nine years. It increases the national debt substantially, and may trigger inflation, which could hasten an end to the current business cycle. At the same time, it likely increases the needs of underserved populations supported by nonprofits and the public sector, at a time when charitable giving may decrease. For us at Commonfund, this means we will be focused on “CPI plus more.” Looking ahead, we believe our clients’ portfolios may need to earn returns sufficient to cover both higher inflation as well as higher constituent needs. Sustaining nonprofit and public investors has never been easy, but that has been our mission for almost five decades and will remain our mission over the years to come. 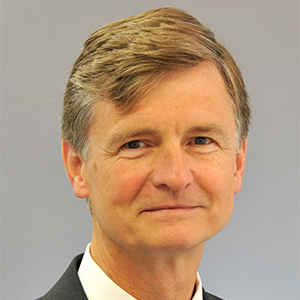