Investment returns of less well-diversified portfolios have flourished in the accommodative market environment created by central banks. But what will happen when rates rise?

In the last five years, as world markets have recovered from the global financial crisis, institutional portfolio returns have generally been strong. While many factors have played a part in this scenario, historically low interest rates and accommodative monetary policies on the part of the Federal Reserve and the European Central Bank—an artificial environment like that of a greenhouse—are among the main causes for the high equity market returns of the last few years.

Yet, even in this period of good returns, the crucial question facing fiduciaries is: How should we prepare our portfolio for the day when accommodative monetary policies end and rates begin to rise?

Some hints may lie in the accompanying table. 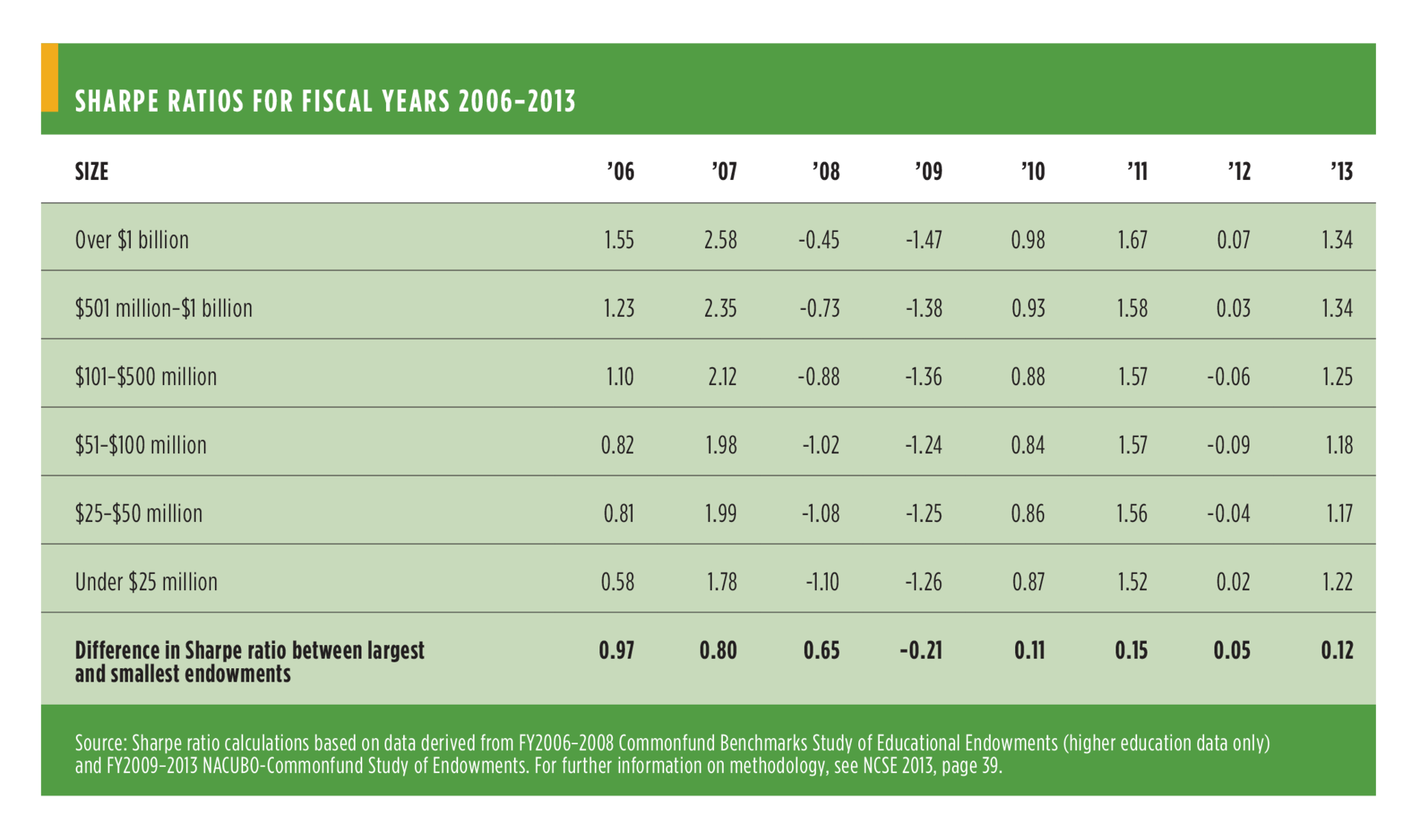 The data shown are from colleges and universities, but similar information is available for private foundations.

Historically, large endowments have usually outperformed smaller endowments. Much of their success can be attributed to the key tenets of the so-called “endowment model,” an investment approach characterized by a long-term horizon, a highly diversified portfolio with a bias toward equity and a willingness to accept illiquidity in expectation of higher returns over the long term.

Over the past few years, however, smaller, less well-diversified endowments have outperformed or produced returns very similar to those of their larger counterparts.

If, however, we examine return figures that have been adjusted for risk, we obtain a different perspective on the investment environment in the years FY2006–2013. The Sharpe ratio, named for Nobel laureate William F. Sharpe, is a measure of risk-adjusted performance. It shows the quality of returns—specifically, how much return was earned for each unit of risk (as measured by portfolio volatility).

The higher the Sharpe ratio the better, meaning that more return was achieved per unit of risk.

In the very accommodative monetary and interest rate environment of that period, risk became to some extent suppressed, making it easier for less diversified portfolios—those with large allocations to traditional stocks and bonds—to ride the rising market. More diversified portfolios saw their performance advantage diminish in relative terms.

Hedge fund strategies were particularly challenged in this environment, proving, in the minds of some, that a 60/40 domestic stock and bond allocation would work for the long term. Most frustrating to advocates of a more diversified portfolio, the five-year track record of this simpler allocation seemed to bear this argument out.

As the Fed begins to withdraw its support the question arises, What will happen in a normalized environment? With the Fed’s bond buying program expected to end soon, higher interest rates may well follow.

This could have major implications for smaller and mid-sized endowments, with their relatively high allocations to medium- and long-term fixed income investments that could suffer capital losses in an interest rate reversal.

Furthermore, because they are less diversified and have fewer sources of return, they are subject to higher volatility.

As fiduciaries review the evolving market environment, it may be time to consider whether an “all-weather” 60/40 stock and bond portfolio is sufficient for the chillier weather that may lie ahead.