It is often said that we live in a world of change, but it is surprising how slowly that change can occur.

Seven years after the onset of the Great Recession, many business school students are still taught that portfolio volatility is a suitable proxy for risk. In an encouraging contrast, however, this year’s NCSE data show that endowment fiduciaries at educational institutions are increasingly—and meaningfully—assimilating new practices in measuring and overseeing risk, taking steps to acknowledge and understand it in its various forms.

Returns and risk both matter

For four of the five fiscal years since March 2009, endowment returns have been strong:

This run of good performance, supported by the policies of global central banks, has boosted NCSE participants’ trailing five-year returns to 11.7 percent. But instead of concluding that life has returned to normal, endowment boards and investment committees seem to have determined that the times call for a renewed emphasis on risk.

In last year’s Study, we introduced a suite of questions about risk management. Participants’ FY2013 responses set a solid but unremarkable baseline: exactly half of responding institutions reported using risk limits and guidelines within their portfolio, with surprisingly little variation by endowment size. But this year, the percentage using such risk measures jumped to 57 percent, with increases across all sizes. Responses to other risk-related questions show a clear increase in the use of risk limits, the types of risk metrics used, and the application of stress or scenario tests to portfolios.

A few brief comments will serve to highlight the trends. As noted, the first table shows that 57 percent of respondents said that they use risk limits and guidelines, up from 50 percent in last year’s Study. Among larger endowments, the shift was very pronounced, from 52 percent last year to fully 61 percent this year. But this awakening to the need for risk guidelines was felt among the smallest endowments to an even greater degree, with those with assets under $25 million reporting an increase of 12 percentage points, from 42 percent last year to 54 percent in FY2014. In between these two extremes, the increase varied from four to six percentage points across the various size cohorts. The trend toward use of risk limits overall, however, is quite distinct.

Drilling down further into the specific types of risk metrics used, the second table shows uniformly increased adoption rates for all four of the metrics surveyed. Interestingly, usage of volatility, the “traditional” risk measure, was essentially stable for three of the six size groups and actually fell in usage among the largest (and presumably most sophisticated) endowments. Use of the “Greek letter” measures such as alpha and beta rose strongly with three of the six size groups, falling at only one. And use of Value at Risk (VaR) calculations, whether returns-based or position-based, also rose.

Respondents’ comments serve to underscore the greater adoption of various risk metrics. A number of institutions commented that they rely on their consultants, investment manager or outsourced chief investment officer (OCIO) firm to conduct various stress tests for them. Other comments provided additional insight:

Apart from ratios and traditional risk measures, the use of stress and scenario testing also increased among respondents. The third table shows an across-the-board rise in the percentage of institutions of all sizes applying such tests to their portfolios this year. As might be expected, their use is clearly higher among larger endowments than it is among institutions in the smaller cohorts. Among the four larger size groups, the rate of usage is substantial, in the range of 49 to 63 percent, and only falls to more modest rates of 33 percent and 20 percent, respectively, among institutions with assets between $25 and $50 million and those with assets under $25 million.

Further evidence of the increased emphasis on risk management may be found in another table, showing a variety of ongoing due diligence procedures employed by participating institutions.

Ongoing Due Diligence Procedures Employed• for Fiscal Years 2013 and 2014 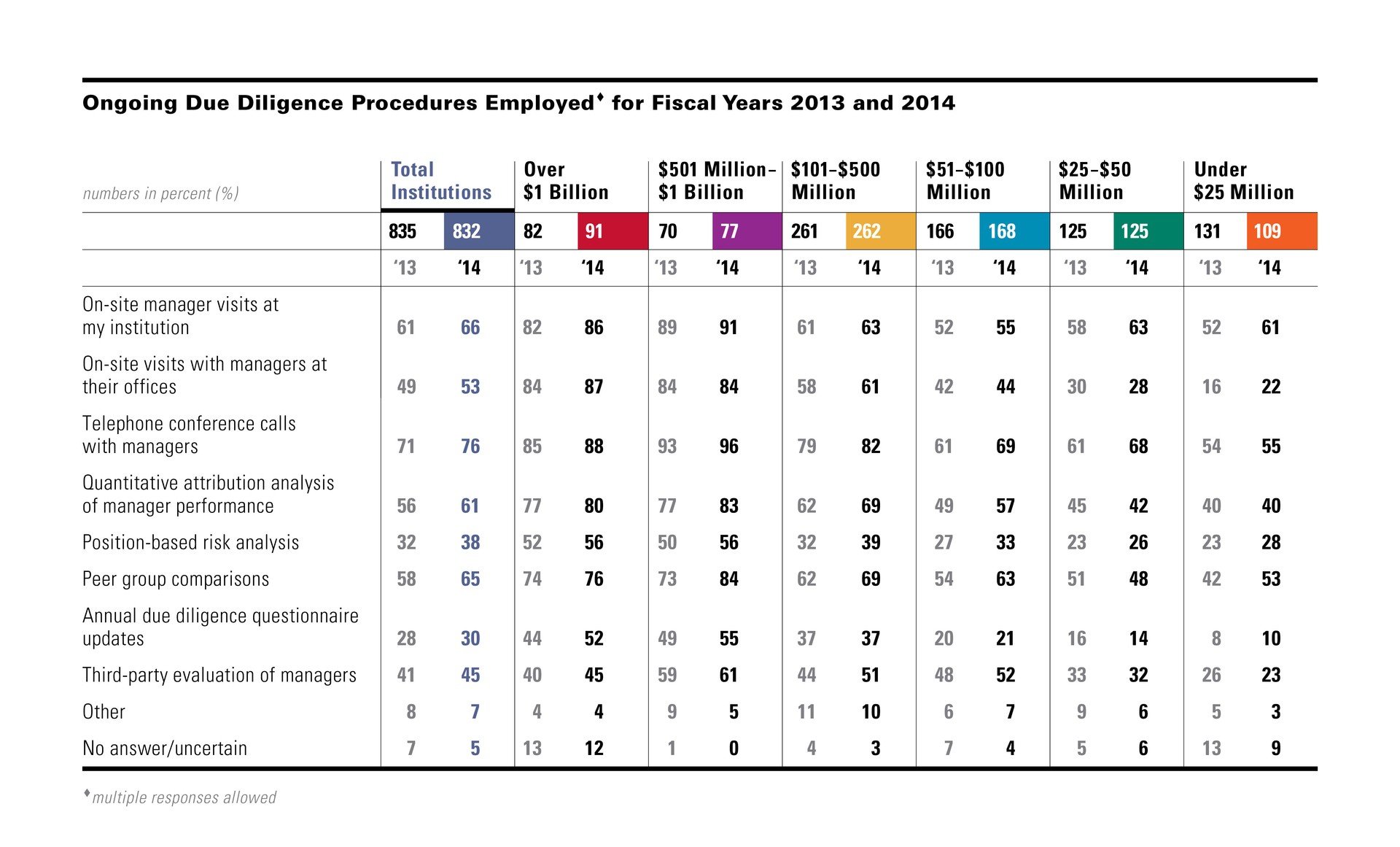 Respondents reported higher overall rates of usage for all eight of the due diligence procedures listed. And, for all but the smaller size cohorts, the eight procedures were employed this year at rates higher than or equal to the previous year. Perhaps most encouragingly, use of the non-quantitative practices such as face-to-face visits and telephone calls with managers also showed healthy increases.

The financial crisis sent a clear message: catastrophic events, while hopefully rare, can and do happen, and the consequences can be severe. It is good to see that risk management disciplines are being placed on a level equal to that of return, creating a culture in which risk-adjusted return becomes the appropriate measure. The future is unknowable, but this increase in best-practice risk measurement is surely to be praised. While those responsible for college and university endowments cannot prevent future crises, at the very least they can be better prepared.

This viewpoint appeared in the 2014 NACUBO- Commonfund Benchmarks Study of Endowments published January 2015.