Stagflation fears are growing among investors as inflation recently accelerated at the same time 2022 GDP growth projections declined due to weaker consumer sentiment and increased risk aversion. A quick look at Google Trends showed worldwide search activity for “Stagflation” hit a five-year high in the first week of March, following a 30+ percent spike in crude oil prices. Many economists and money managers believe that stagflation is inevitable.

In this chart of the month, we compare the 2022 GDP growth and inflation expectations for the U.S. and the Eurozone with changes in energy prices and unemployment versus six months ago. For the U.S., we also compare the current levels of growth, inflation, and unemployment versus their corresponding averages from 1973 to 1975, the most recent period of stagflation. The Russia-Ukraine crisis has catalyzed commodities prices higher as the conflict negatively impacts two key global suppliers of energy and food. The impact has built on top of supply bottlenecks exposed by the COVID-19 pandemic. As a result, inflation has proven anything but “transitory” with 2022 rates now expected to average 5.8 and 6.0 percent in the U.S. and Europe, up from expectations of 3.0 and 1.9 percent, respectively, just six months ago. Gasoline prices in the U.S. increased by 38 percent versus last year and 41.4 percent in Europe. However, 2022 inflation rates are still lower than the average inflation rate in the U.S. during 1973-1975 of 9.3 percent. At the same time, GDP growth has been revised lower from 3.7 and 4.6 percent for the U.S. and Europe to 3.4 and 2.7 percent, respectively. The economic impact of sanctions against Russia is much larger for Europe stemming from its dependence on Russian energy, significantly lower trade, and other financial ties. Various indicators of consumer sentiment and economic activity point to lower consumption as real incomes have gotten squeezed by higher prices. Business and residential investment could also slow because of increased risk aversion. On the positive side, current GDP growth rates remain higher than the average of 1973-1975 due to negative growth for the U.S. economy in 1974 and 1975. The strong labor conditions remain positive in comparison to the 1970s. The latest unemployment rate of 3.6 percent improved versus six months ago and is much lower than the average of 6.3 percent in 1973-1975. Job openings are close to all-time highs and were almost twice the number of unemployed people in the workforce. In Europe, the unemployment rate also declined from 7.3 to 6.8 percent. 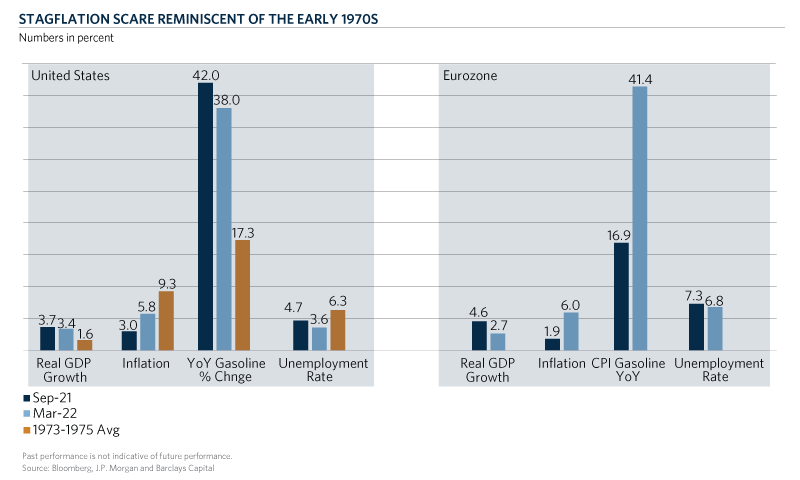 Judging by the numbers, stagflationary pressures are much more pronounced in Europe than in the U.S. Overall, comparisons to the 1970s show the current economic conditions to be much more favorable. Nevertheless, considering the more hawkish stance of global central banks, expected investment returns from traditional equity and fixed income portfolios will likely be challenged. As a result, the role of alternative investments including lower beta equities, private capital and opportunistic and private credit is becoming much more important. At Commonfund, we continue to employ a balanced approach to equities, blending active fundamental and quantitative strategies with passive approaches, providing exposures to opportunistic and private credit to control duration risk and benefit from significant yield advantages, and helping clients to build their allocations to private capital strategies to capture the potential higher returns they offer.