Bonds: Unwanted and Unloved but not Unnecessary

This benign and beneficent market is portrayed in Exhibit 1, which plots the yield on the 10-year US Treasury bond dating back to the 1980s. We can see that interest rates peaked in the early 1980s near 16 percent and then began a long and consistent decline to 1.4 percent in June of 2016. 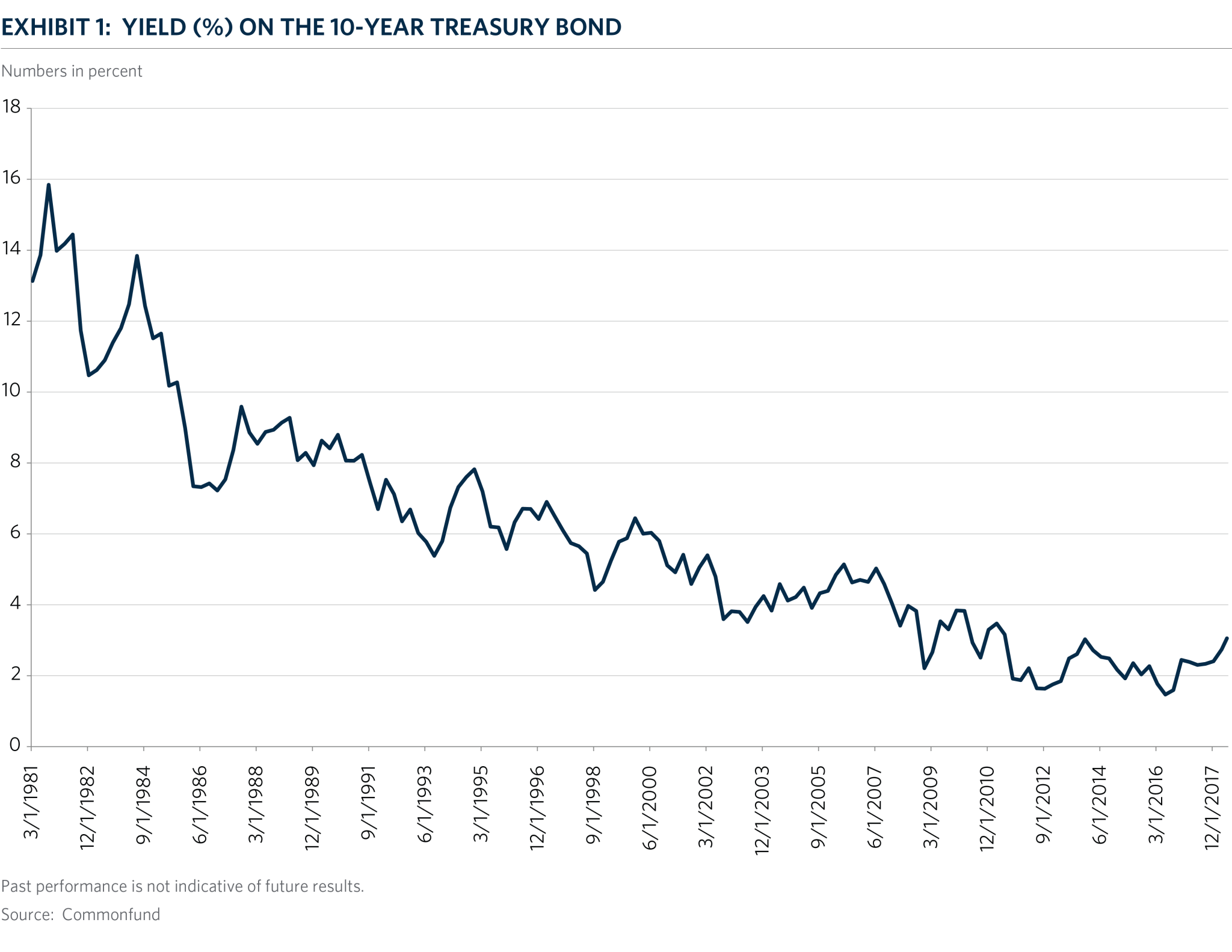 And, declining interest rates translate into rising prices for bonds. Over the last thirty years, the average annual return to the 10-year Treasury bond has been about 6.3 percent. Bottom line, it has been a great time to own bonds.

Importantly, we should not overlook that Treasury bonds are an economic “shock absorber”; they play a critical part in modern portfolio construction. In times of stress, investors have historically flocked to Treasury bonds as a natural hedge when the financial markets become more volatile or suffer a market downturn.

Exhibit 2 demonstrates the return to the 10-year Treasury bond during times of stress and recession in the U.S. financial markets. We can see that Treasury bonds outperformed stocks during the Great Financial Crisis of 2008, the popping of the Tech Bubble in 2000 – 2002, and even in the brief recession of 1990.

For an equity-oriented long-term portfolio, Treasury bonds are an insurance policy. The fascinating observation is that over the past 30 years we were all paid to own this insurance. The consistent and continual decline of interest rates over this time period meant that we got to have our cake and eat it, too. We got to own an insurance policy — Treasury bonds — and we were compensated with rising bond prices.

Unfortunately, most insurance policies don’t work this way. Typically, we aren’t paid to own insurance but rather we have to pay for that protection. Whether it is car insurance, home insurance, or some other form of protection, we all pay annual premiums to the insurance company to guard against a loss.

Well, guess what? Treasury bonds are still an important component of a well-diversified portfolio. The catch is that with interest rates near 30-year lows and headed up, we now have to pay for this economic insurance. We have had it so good for so long that we have come to expect that we should be paid for putting an insurance policy into our portfolios. Unfortunately, the economic reality of the financial markets has finally caught up to us — even if it did take the Dean of our monetary college 30 years to shut down the party.