In its latest meeting on November 3rd, the Fed announced its decision to begin scaling back its historic bond purchasing program, marking the beginning of the end of the program that was aimed at protecting the economy from the impact of the COVID-19 pandemic. While the Fed is expected to wrap up the process by mid-2022, Fed Chair Jerome Powell also said that the tapering does not imply hawkish moves regarding interest rates, remaining patient until further progress is achieved in the labor market. Investors began to price in a much more aggressive path towards normalized interest rates at the end of October. The front end of the Treasury curve was pricing in more than two 25 bp hikes by the end of 2022, causing the yield curve to flatten between the 2-year and 10-year tenors and invert between the 20/30-year tenors. In this chart of the month, we show the unusual move in the yield spread between the 2-year and 10-year notes which tightened by 13 basis points on October 27th. The flattening move is larger than 99.2 percent of all daily changes in the last 20 years as the 2-year yield moved higher due expectations of early Fed tightening. While short yields moved way ahead of the Fed guidance, poor market depth likely also aided the move. Conversely, 10-year yields moved lower due to expectations of a lower Fed terminal rate as economic growth could slow with a more hawkish Fed.

Stubbornly high inflation continued to drive market participants’ bets on hawkish Central Bank moves and higher interest rates. On October 29th, the Bureau of Economic Analysis (BEA) showed that consumer prices as measured by the PCE Deflator rose the most year-over-year since 1990, while the Bureau of Labor Statistics reported that its Employment Cost index rose the most since 2004. Price increases more than offset the earnings boost that workers received over the last 12 months. On October 28th, the BEA reported that U.S. GDP grew by 2.0 percent on an annualized basis in the third quarter which was weaker than the most bearish market expectations. A drop in consumption and inventory growth accounted for most of the disappointing report. However, despite the growth slowdown, investor positioning remained tilted towards higher interest rates.

Central Banks in other developed areas are dealing with similar market behavior, including Europe, the U.K., Canada and Australia. In Europe, the ECB president Christine Lagarde pushed back against expectations that the Bank will raise rates next year. However, investors found her message too weak and added to their bearish fixed income positions. Yields on Australia’s 3-year bonds recorded the biggest monthly increase since 1994 after the Reserve Bank of Australia stopped defending its yield target. In Canada, the BOC surprised markets by ending its bond-buying program and accelerated the timing for future rate increases. In the U.K., speculations that the BOE will be the first major Central Bank to hike rates also intensified in recent weeks.

At Commonfund, we believe in diversifying our fixed income portfolios and generating excess returns from subsectors such as leveraged loans and private credit. Those areas provide both a significant yield advantage and a shorter duration, which could be beneficial in a rising interest rate environment. 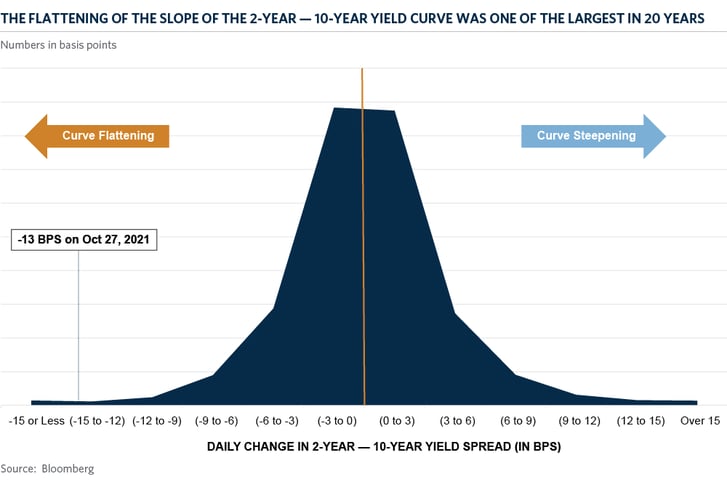