Chart of the Month | Beware of High Yield Bonds

Income-hungry investors continued to push yields on speculative grade bonds to new lows despite the challenging business conditions this year. The yield on the Bloomberg Barclays Corporate High Yield Index reached 4.18 percent on December 30th, the lowest on record, while the Bloomberg Bankruptcy Index remained at levels last seen during the economic slowdown in the first half of 2016.

The Bloomberg Bankruptcy Index measures the occurrence and severity of U.S. bankruptcy activity for corporations with at least $50 Million in reported liabilities. After hitting its post-GFC high in August, the Index has steadily declined as various fiscal and monetary programs supported businesses, while the gradual reopening of the economy during the summer led to a recovery in consumption. The Federal Reserve’s pledge to support the U.S. economy has also supported investors’ appetite for risk, allowing corporations to borrow record sums this year and making corporate balance sheets far riskier. According to the Securities Industry and Financial Markets Association (SIFMA), investment-grade and speculative-grade corporations issued $2.2 Trillion in total debt in 2020 as of November, a record annual level since 1996. Speculative-grade corporates alone issued $390 Billion, more than twice the combined amount issued in 2008 and 2009. The increase in borrowing has pushed leverage, the ratio of debt to earnings, to all-time highs, while the ability of some companies to support that debt has declined creating zombie companies where earnings don’t cover interest expenses.

Much of the borrowing went to increase cash levels, which reached $3.4 Trillion for companies in the S&P 500 Index, helping some of the hardest hit industries from the pandemic keep pace with this year’s equity market rally despite the increased insolvency risks. Bankruptcy rates are expected to pick up in the first half of 2021 as a result of a second wave of COVID-19 cases in developed economies where containment measures curtailed activity over the Christmas holidays. As a result, high yield option-adjusted spreads paint a less than compelling risk-reward picture at present. They have tightened significantly — consistent with much higher profit margins, a much stronger economic recovery, and higher Treasury yields — conditions that do not exist today. As a result, we continue to favor an underweight to high yield while our managers have reduced their credit overweights, allocating to mortgages and asset-backed securities over Treasuries. Within private credit allocations we prefer strategies that are focused on shorter-term corporate loans with strong covenants and first or second lien protection. We continue to see an attractive liquidity premium available to investors in private credit, particularly when gaining access through experienced managers with a demonstrated track record and proven work-out capabilities. 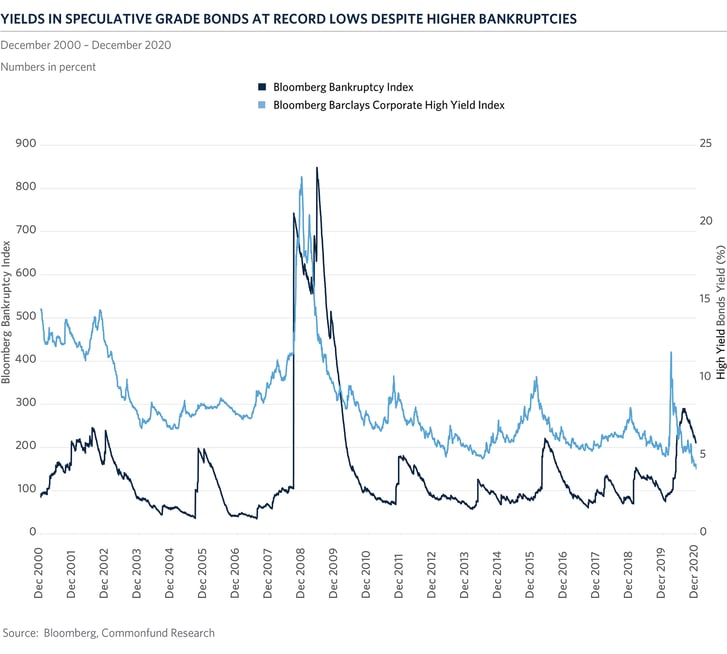 Outsourced investment management, once primarily a solution for small institutions with limited resources, is now used by a broad range of long-term investors. When properly implemented, outsourcing...
Perspectives | Insights Blog

A Gentle Giant The Commonfund community was shocked and saddened this week by the news of the sudden passing of our former President and CEO, Verne Sedlacek at the age of 67.
Market Commentary | Insights Blog

The potential for rising inflation is becoming a top concern for many investors and consumers. Many believe that inflation is already here as evidenced by price increases in commodities, homes,...