As growth continues to rebound around the world and investors return to their pre-pandemic way of life, global market performance is beginning to reflect the divergent speed of normalization within developed and emerging markets. As global trade increased, fueled by rising demand and supported by accommodative government policies, supply has struggled to keep up, resulting in stronger commodity prices and a weaker U.S. dollar. These market drivers have historically led emerging market (EM) equities to outperform developed market (DM) equities as we show in this chart of the month.

A weaker U.S. dollar, shown by the orange line, and strong commodities markets, represented by the light blue line, coincided with robust relative performance of EM versus DM equities in the 2000s. On the other hand, during the 2010s, ample commodity supply resulted in weaker prices and together with a rebounding U.S. dollar led EM equities to underperform. Since the start of the second quarter of 2021, however, EM equities have underperformed DM equities by 122 basis points despite the 11.2 percent gain in commodities and 3.7 percent decline in the U.S. dollar. Drivers of the relative weakness of EM equities include lagging economic activity due to declining mobility, the slow roll-out of vaccination programs, and tighter financial conditions.

With the biggest vaccination campaign in history underway, more than 1.9 billion doses have been administered worldwide, enough to vaccinate 12.5 percent of the global population. However, countries and regions with the highest incomes are getting vaccinated more than 30 times faster than those with the lowest incomes.

Europe is emerging from the extended lockdowns and is set, along with the U.S. and the U.K., to report strong GDP growth this quarter. Conversely, mobility collapsed in Turkey, India and a number of Asian countries such as Taiwan, Singapore and Thailand. In Latin America, caseloads are increasing once again due to low vaccination rates except for Chile, where 50 percent of the population has received at least one dose.

Low vaccination rates combined with many governments’ unwillingness to impose or continue restrictions, raise concerns that consumer spending will face headwinds in the short-to-medium term. Additionally, several EM economies are leaning towards more hawkish policies in response to rising inflationary pressures. China’s April total social financing slowed to 11.6 percent year-over-year, representing a negative 0.7 percent impact on GDP. Facing above-target inflation, Hungary signaled a tighter policy stance in June with potential price pressure from tight labor markets beyond the transitory factors. Similarly, the central banks of Korea, Brazil and Russia have taken more hawkish tones in response to elevated inflationary pressures. At Commonfund, we continue to believe in the secular growth story for emerging markets, even with the current lagging performance, while looking to generate excess returns from active management by utilizing top-down macro and quantitative strategies in the long term. 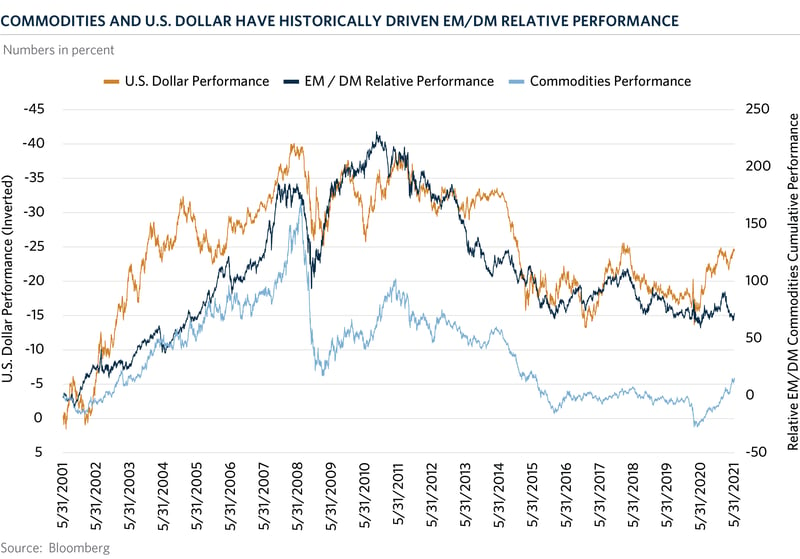