The trend of improving performance of sectors most sensitive to the strengthening economy remained on track in February 2021. For the most part of 2020, the traditional S&P 500 market-cap-weighted index maintained a significant price premium over its equal-weighted equivalent mainly due to considerable concentration in highly priced technology and communication services names. The two sectors along with e-commerce leader, Amazon, accounted for 44.8 percent of the S&P 500 while the FAANG+M (Facebook, Apple, Amazon, Netflix, Google, Microsoft) stocks represented 24.7 percent of the S&P 500 market capitalization at the end of August 2020.

Conversely, sectors that were negatively impacted by rising interest rates like utilities, healthcare and staples declined by 6.1, 2.1 and 1.4 percent, while discretionary also fell 0.9 percent. Energy names were driven higher by a mild case of euphoria about tighter oil markets and expectations of a new commodities supercycle driven by a weaker U.S. dollar and massive central bank support. Financials were supported by positive sensitivity to rising interest rates and the steepening yield curve, strengthening earnings, price momentum and attractive valuations. Industrials also benefited from the increased probability of a fiscal stimulus and an infrastructure bill from the Biden Administration.

At the end of February 2021, the equal-weighted S&P 500 index maintained a relative overweight in those sectors of 235, 262 and 582 basis points, respectively. On the other hand, it had a 639 and a 1226 basis point underweight to the communication service and technology sectors which returned 6.2 and 1.2 percent. The average price-to-earnings multiple of the tech, communications and discretionary sectors in the market-cap weighted index is also pricier, mostly due to a higher allocation to Tesla with a trailing price-to-earnings multiple of 914.

As long as investors continue to view increasing interest rates as a sign of improving prospects for the economy, the equal-weighted index should continue to gain ground. Of course, companies need to show improving earnings for the equity market to be able to absorb higher rates and continue to move in a positive direction. So far, 98 percent of companies in the S&P 500 index have reported fourth-quarter earnings, generating a positive average earnings surprise of 17.5 percent over gloomy expectations. Earnings grew by 5.25 percent over the previous quarter with materials, financials and technology showing the strongest growth. Given these dynamics, we continue to favor the S&P 500 equal-weighted index over the traditional S&P 500 cap-weighted index for portfolio allocations to passive U.S. equities. 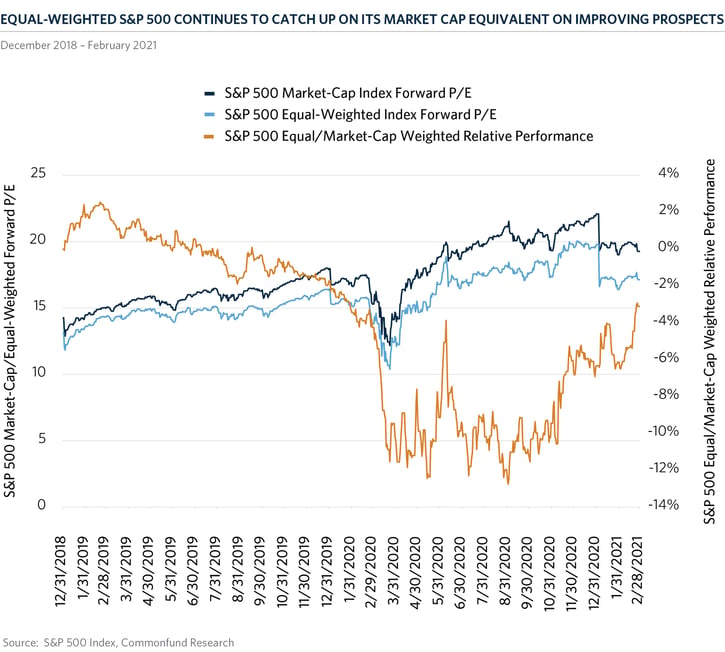