As 2021 comes to an end, we enter 2022 with a good dose of uncertainty in the markets as the Fed begins to reduce and ultimately removes its accommodative policy which has been in place since the COVID-19 pandemic began in early 2020. In addition, the fast spread of the new less lethal but highly contagious Omicron variant is expected to deal a significant hit to the economy over the next two months as millions of workers are forced to stay home.

Personal consumption, which accounts for 69 percent of the $23.2 trillion U.S. economy, is slowing after increasing at a record pace in 2020 and 2021. U.S. data show that restaurant spending, representative of COVID-sensitive services, has also decelerated sharply. Furthermore, high inflation rates and significant delivery delays and order backlogs are causing consumers to hold off on larger household purchases. In light of the newly hawkish U.S. Federal Reserve and the ever-evolving virus, analysts and investors are having a difficult time gauging the future direction of the stock market. After driving equity returns higher in 2021, earnings are expected to slow down in 2022, with an average forecast of 5.5 percent in the first half before expansion picks up again in the second half, averaging at around 8.5 percent in 2022.

In this chart of the month, we see that the year-over-year growth in disposable income and the savings rate as a percent of disposable income have declined below their 10-year averages, and pre-pandemic levels, which could further impact spending. The savings rate dipped to 6.9 percent, the lowest level since December 2017, as consumers reached into their savings to offset declining disposable income which has not grown since November last year. While disposable income has fallen for four months in a row due to waning federal stimulus, companies have been generally increasing pay to attract and retain talent amid widespread labor shortages. The latest November income data showed that the labor market continues to heal with job openings at 10.56 million, slightly below the record 11.1 million openings in July. Wage gains have mostly offset the decline in unemployment insurance which fell 18.1 percent in November, down 90 percent compared to July. 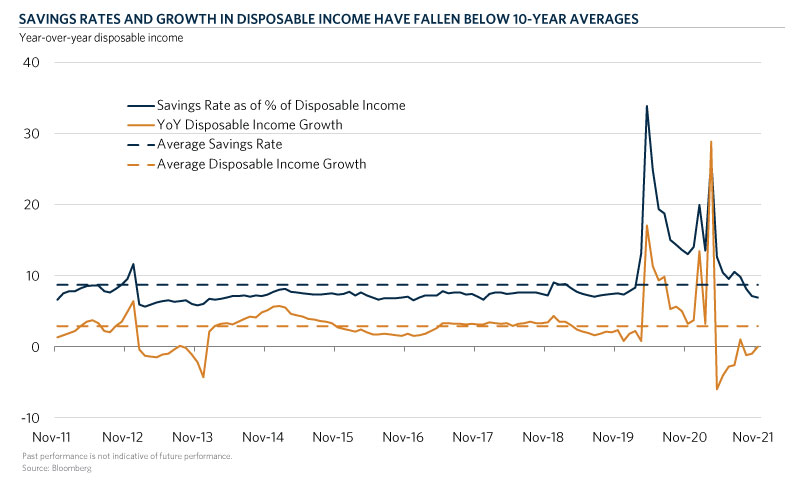 Fiscal policy is expected to be tighter going into the new year. The Biden administration was unable to pass the ‘Build Back Better’ social spending package which could constrict short-term cashflows. The biggest near-term impact will come from the expiration of the monthly Child Tax Credit (CTC) payments which were around $16-17 billion per month, with much of the benefit going to low-income households. The reduced support could knock nominal spending lower by 25-50 basis points, or a 1-2 percent negative contribution to Q1 annualized consumption growth. On the other hand, consumer finances are in good shape. Barring a sharp stock market selloff, consumer net worth should remain high. With wages growing, particularly for the low-income cohorts, full employment could be in sight by the middle of 2022.

At Commonfund, we strive for balanced factor exposures within our public equity portfolios. Specifically, our managers focus on companies with sustainable earnings growth as well as those which are better prepared to weather inflationary pressures on profit margins and potential slowdowns in sales. We also employ low-volatility strategies, which benefited from the trepidation in the fourth quarter surrounding the Fed’s accelerated taper pace and the spread of the Omicron variant.