Few markets have been as heavily impacted by the onset of the global pandemic as real estate.  Real estate is considered a hard asset that “you can touch and feel”, but during a pandemic no one wants to touch or feel anything. Additionally, government restrictions on movements to and from physical locations and landlord recourse places a unique strain on the asset class.

Leading up to the COVID-19 crisis, real estate markets remained relatively disciplined from a pricing and leverage perspective. Beginning the year, publicly traded REIT leverage levels were approximately 10 percent lower than in 2007 (the height of the previous cycle) and it seemed that investors got religion on the excessive use of leverage in both the public and private markets. Additionally, unlike the expensive relative pricing versus treasuries in 2007, capitalization rate (income divided by property value) spreads held firm near their longer-term historical average. 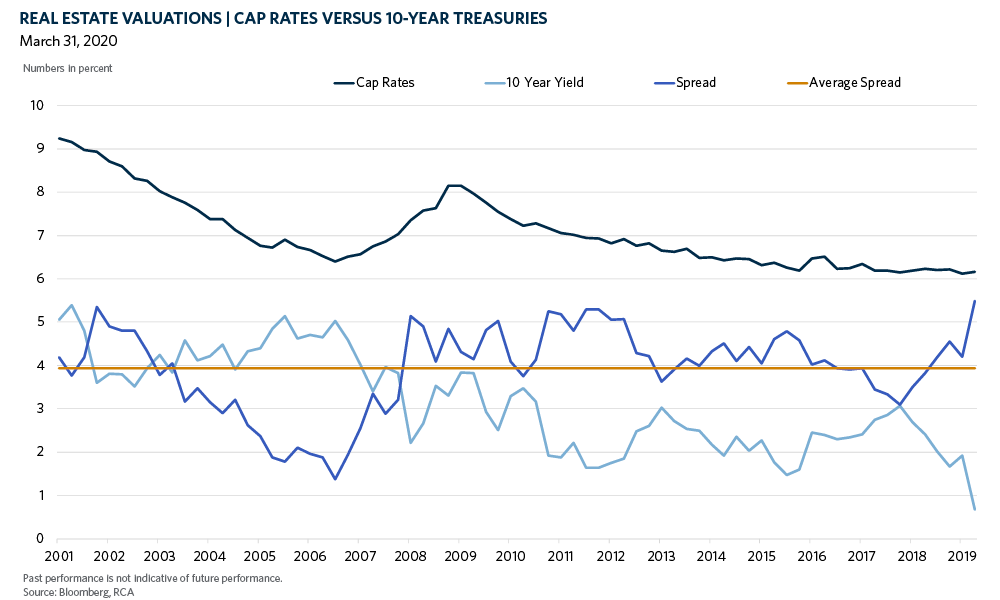 In 2007, cap rates to treasury spreads were at their lowest level in the last 20 years.  In some sectors or geographies, spreads even went negative. Further, the ten-year yield stood above 5 percent before equities began to decline and at 4 percent when Lehman Brothers collapsed. At those levels’ treasuries represented a reasonable relative value investment for investors seeking to generate returns that achieved long-term objectives. Additionally, with real estate appearing relatively expensive, investors repriced the asset class — pushing cap rates up over 150 basis points and spreads back toward their average — contributing to significant declines in real estate values.

Today, the 10-year yield stands at approximately 70 basis points, hardly creating a relative buying opportunity for long-term investors seeking to achieve a 5 percent real rate of return or a 7 percent nominal rate.  Further, cap rate spreads are at their widest level in 20 years, which presents a relatively attractive investment opportunity for long term investors. We believe the combination of low treasury rates and attractive spreads will keep cap rates from expanding like they did during the Global Financial Crisis and serve to moderate declines in most sectors of the asset class.