Is Spending Policy the Other “Free Lunch” in Investing?

We believe spending policy not only should influence strategic asset allocation but should be thought of as the other "free lunch" of long-term endowment investing alongside diversification.

In 1952, Nobel Prize laureate Harry Markowitz famously said, “diversification is the only free lunch in investing.” What he meant was that when building a portfolio, allocating to asset classes with differing risk and return characteristics can lead to a portfolio with a reduced level of risk without sacrificing returns. And while this principle still holds true today, those benefits are perhaps not as powerful as they once were.

As our Chief Executive Officer and Chief Investment Officer Mark Anson likes to joke, free lunch today is more like a free breakfast or even a Starbucks cup of coffee given the overall rise in correlations between asset classes that we've seen over the past decade (see Figure IV below). Higher correlations tend to erode those diversification benefits. 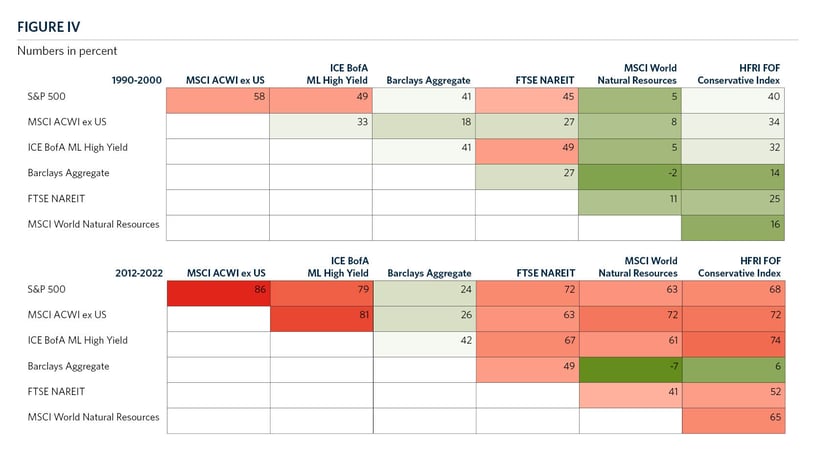 So, where can we get our additional risk-mitigating calories? We believe it is through the spending policy. This is because for most institutions, the biggest risk is not necessarily a drawdown of the endowment pool but rather a drawdown of the distribution used to support the institution. Therefore, we would argue that the spending risk metrics are the most important risks to mitigate.

Below, we have defined three of these key metrics.

Spending Volatility: The standard deviation (or dispersion relative to the mean) of the annual spend.

Reasonable goal: ensure this metric is lower than the investment volatility of the portfolio, which would mean that the spending formula is effectively mitigating the volatility generated by taking risk in the endowment.

Reasonable goal: limit the number of negative spending years to maintain consistent and growing support from the endowment.

Annual Spending Drawdown: The average and max percentage of decline in spend dollars, year over year, during these negative spending years.

Reasonable goal: minimize the annual spending drawdown to avoid sizable budget shortfalls that could cause operational stress for the institution.

Selecting an investment plan based solely on maximizing return per unit of risk (pick your favorite risk metric: volatility, drawdown, etc.) while ignoring the spending policy’s ability to mitigate some of that investment risk is an oversight we see all too often. We would argue that if a spending policy that decouples from the endowment market value is implemented, this may allow the portfolio the freedom to increase its allocation to growth assets without the commensurate increase in the risk that matters most, the distribution. So, does this result in the free lunch that we have been searching for?

Interested in seeing the full analysis?  Take a deep dive into our whitepaper “Endowment Spending Policy: Often Overlooked but Critical to Long-Term Success.”