Is this Time Different? Risk Assets and Real Rate Moves

February ended in the same fashion as January, with elevated volatility across a wide spectrum of asset classes. Equities, fixed income, currencies, commodities, and cryptocurrencies all swung violently, driven by concerns about slowing economic growth and earnings, high inflation and falling consumer sentiment, headwinds related to central banks’ hawkish behavior and above all, the escalating conflict between Russia and Ukraine, resulting in the invasion of the latter.

Prior to Russia’s commencement of military action against Ukraine on the night of February 23rd, markets were mostly concerned with the Fed’s path towards the removal of monetary accommodation and normalization of interest rates as indicated by the higher implied volatility of U.S. treasuries as compared to stocks. In its meeting on December 15th, the Fed took a more-aggressive-than-expected tone towards normalization resulting in the markets’ recalibration of expected rate hikes in 2022. On December 14th, the markets expected 2.7 rates hikes in 2022 but following the FOMC meeting, and two months of higher-than-expected inflation prints, expectations rose to 6.5 rate hikes. At the same time, the 10-year real rate jumped from negative 1.1 percent to negative 0.44 percent, a move of more than two standard deviations. Historically since 1997, two-standard-deviation moves have resulted in market declines across most risk assets which is the topic of our chart of the month. On average, equities experience a 2.9 percent monthly loss while REITs and commodities decline by 6.5 and 3.9 percent, respectively. 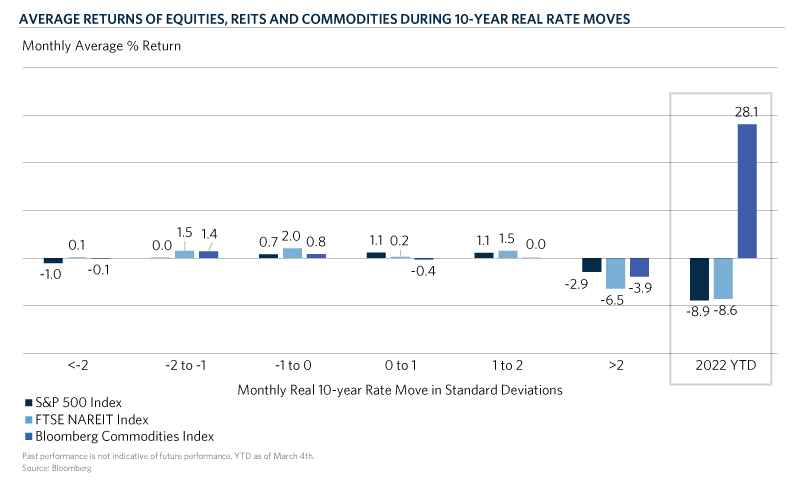 While equities and REITs have fallen in line with history, commodities have risen sharply. In fact, the Bloomberg Commodities Index has appreciated by 28.15 percent year-to-date, its best start since 1973. Of course, a significant amount of return has accumulated because of the Russia/Ukraine conflict. Russia is the second largest producer in the world of oil and natural gas behind only the United States while the Russia/Ukraine region exports almost a quarter of the world’s wheat. The risk of higher crude oil prices is increasing on the back of a potential oil embargo by the U.S. and its allies, exacerbating an already tight market resulting from years of underinvestment. Wheat prices have rallied by 75 percent since the beginning of the year, severely impacting the lower income portion of the population and driving consumer sentiment lower. Gold has also rallied despite higher interest rates on the war premium and strong indications that higher inflation will persist for longer.

Given the situation, investors are wondering how global economic conditions will play out in 2022. We believe that we will likely see a world of more inflation and less growth. The crisis comes at a time when the global economy had been improving as evidenced by rising manufacturing confidence, easing supply bottlenecks and higher mobility on the back of receding Omicron cases. Much higher commodity prices now imply elevated levels of inflation in 2022 which will weigh on real incomes and growth. In addition to lower consumption, investment may also be impacted negatively due to the perceived uncertainty, particularly in Europe. This has introduced the topic of stagflation which has not been seen since the years of the Middle East oil embargo in 1973 and the early 1980s. Meanwhile, the ensuing war between Russia and Ukraine has stoked investors’ appetite for bonds which were heavily underweighted, resulting in a substantial unwinding of the 10-year real rate jump. In our tactical dashboard, we continue to rate the impact of inflation as negative while downgrading our growth and monetary policy indicators.