The liquidity markets have experienced one of the largest disruptions since the inception of SEC Rule 2a-71 in the early 1970’s.  Over the past few months, we have seen a massive shift of investor assets from prime to government money market funds in response to post-crisis regulatory amendments that have been years in the making.

Surprisingly, the market reaction happened quickly and dramatically, even though the changes were widely known.  In October 2016, SEC rule amendments were implemented to prevent the possibility of cash investments, specifically prime money market mutual funds, from “breaking the buck” and resulting in liquidity panics in the future.  The unintended ripple effects from the considerably more restrictive rules have been dramatic: 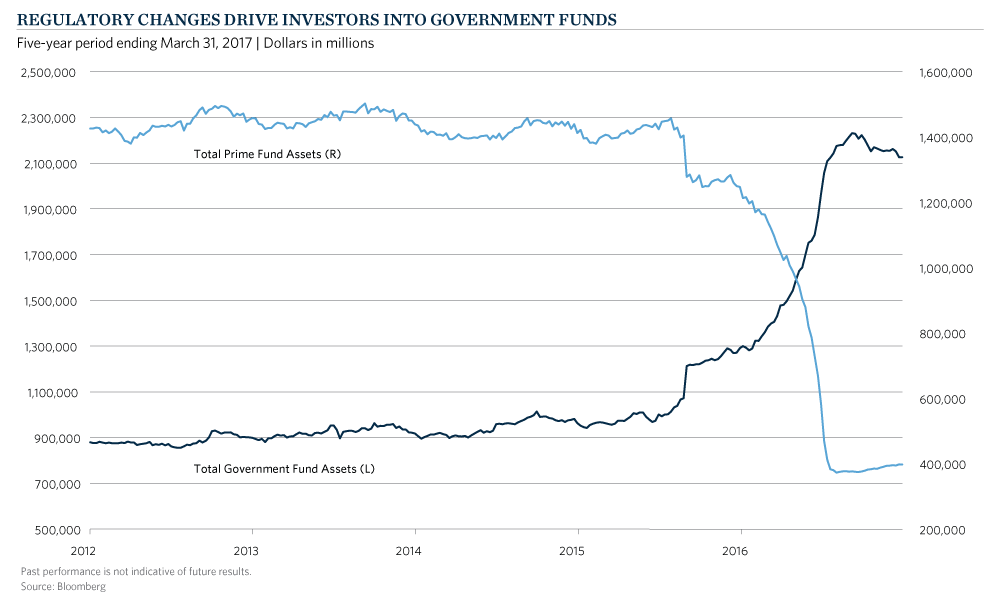 Ultimately, the massive fund flows resulting from the regulatory changes have created one of the most significant crowded trades the markets have ever experienced.  Investors who simply “moved with the herd” may have exposed their portfolios to unintended and unanticipated risks.  Conversely, for investors that are more thoughtfully managing their operating assets the door is open to actively manage risks and returns. 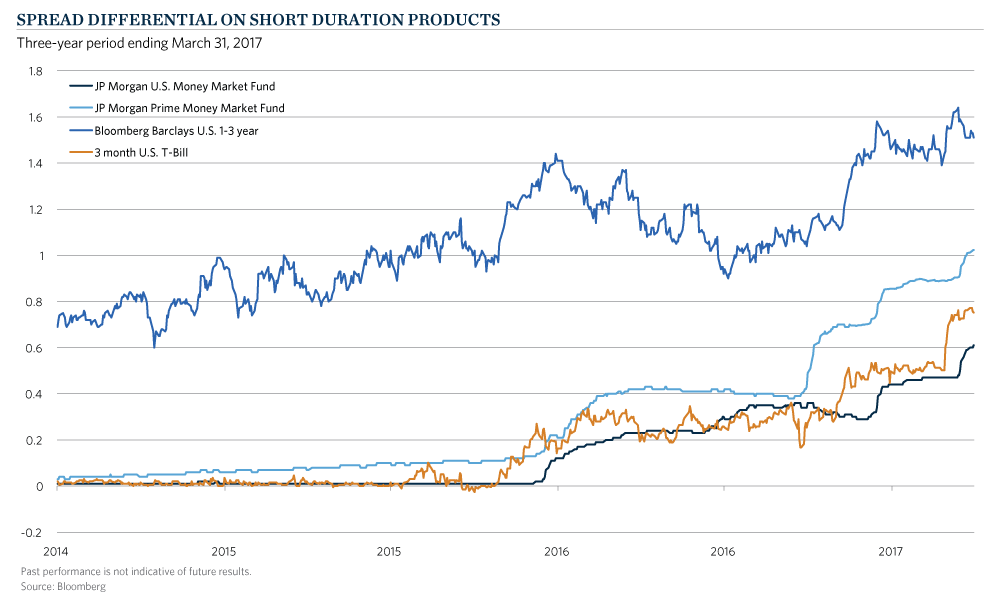 A look at the current rate environment in the short-term fixed income markets clearly shows the problem facing managers of operating assets.  Prime rates have exceeded U.S. government rates as commercial paper issuers (the typical asset found in prime funds historically) now must offer higher returns to entice investors to buy these assets. However, even at these higher rates, prime funds have failed to lure back short-term investors due to the new regulatory constraints.  U.S. government money markets have the opposite problem.  The increased popularity of the “less regulated” and “lower risk” U.S. government money market funds have kept yields well below the 3-month U.S. Treasury bill, which coincidentally has received a yield boost from recent actions by the FOMC.

One opportunity in the short-term fixed income markets that remains is the potential yield pick-up of investing in short- term investment grade markets.  These securities represent only an incremental increase in risk for virtually the same liquidity profile as the money markets.  Incorporating short duration investment grade credit risk as part of a highly liquid diversified portfolio over the last few years would have provided a significant benefit to managers of operating assets. [2] We call this approach the Treasury+ model, which has four components:

It is important to recognize that the Treasury+ Model is NOT the same as the widely-known endowment model, as operating investment assets are not perpetual funds. The Treasury+ Model focuses on lowering volatility, containing maximum drawdowns, maintaining liquidity, and limiting risk of loss, while producing returns that exceed cash returns or traditional highly conservative cash plus short duration Treasury returns.

Our earlier article “Bridging the Budgetary Gap: Where Did Our Operating Income Go?” analyzed the diversified Treasury+ model in historical market environments. In this crowded-trade liquidity environment, the spread between U.S. Government money market securities and a managed Treasury+ model has widened significantly.  We believe active cash and operating asset investors have an opportunity to move out of the crowded (government only money market funds) trade and invest in a diversified portfolio of high quality liquid assets.