Flexing Your Global Portfolio Can Lead to ACWI Fatigue, but Don't Throw in the Towel Yet

Like the build-up of lactic acid in your muscles after a strenuous workout, the underperformance of Morgan Stanley Capital International All Country World index (MSCI ACWI) vs. the Standard & Poor’s 500 (S&P 500) – or any U.S. equity benchmark, for that matter – for the last several years has been building up to a painful point. This pain threshold has pushed investors to the limits of their global endurance resulting in what we call “ACWI Fatigue.” ACWI Fatigue is most acute with institutional investors who use the MSCI ACWI as their equity benchmark and, as a result, have a globally-oriented equity portfolio.

Exhibit 1 demonstrates this Fatigue. Since the Great Recession, ACWI has underperformed the S&P 500 in six out of eight years. The natural query that investors make is why construct their portfolios to match a global benchmark when the U.S. stock market performs so much better? The question seems all the more relevant in light of the extended underperformance of ACWI compared to the S&P 500.

However, before we throw out our global training regimen, let’s take a closer look at the longer term track record of ACWI ex-U.S. versus the S&P 500. Exhibit 1 presents a clear cyclical pattern. There are long stretches of time when ACWI ex-U.S. outperforms the U.S. equity markets and vice versa. Trying to time these markets is not an easy task but it is clear that the performance of ACWI ex-U.S. and the S&P 500 do complement one another. 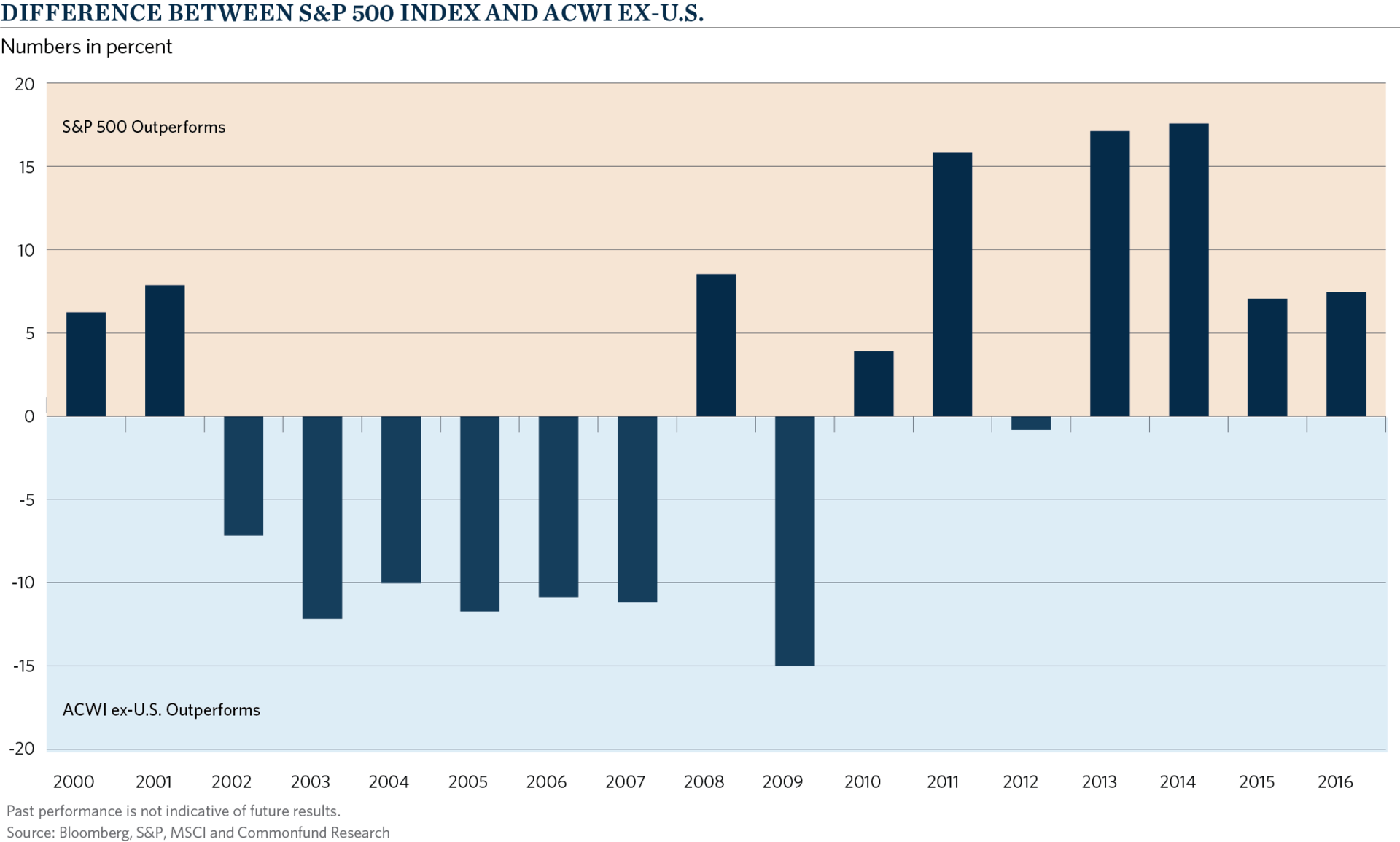 Another part of the Fatigue is the increasing globalization of economic fundamentals. Going back 20 years, economists referred to the “G7”—the seven largest industrialized nations that ruled much of the world’s economic output. Then this group expanded to the G10, then the G15 and, today, the G20. Simply put, the world has become a smaller place. Macroeconomic policies—both fiscal and monetary—are synchronized to a much greater extent than they were just 10 years ago. This means that diversification on a global scale has less of an impact today than in the past.

Exhibit 2 demonstrates this point. We chart the rolling correlation of ACWI with the S&P 500. Exhibit 2 indicates that going back to the early and mid-1990s, the correlation between ACWI and the S&P 500 was about 0.5. However over the last 15 years, this correlation has climbed to 0.95.

Another reason for this increased correlation across global equity markets is that corporations now sell to the global market place. Coca-Cola earns the majority of its revenue from outside the United States. Mercedes, Audi, and BMW sell more cars in the United States than in Germany. Large corporations now operate on a multinational scale—geographic borders do not define the limits of their marketplace. 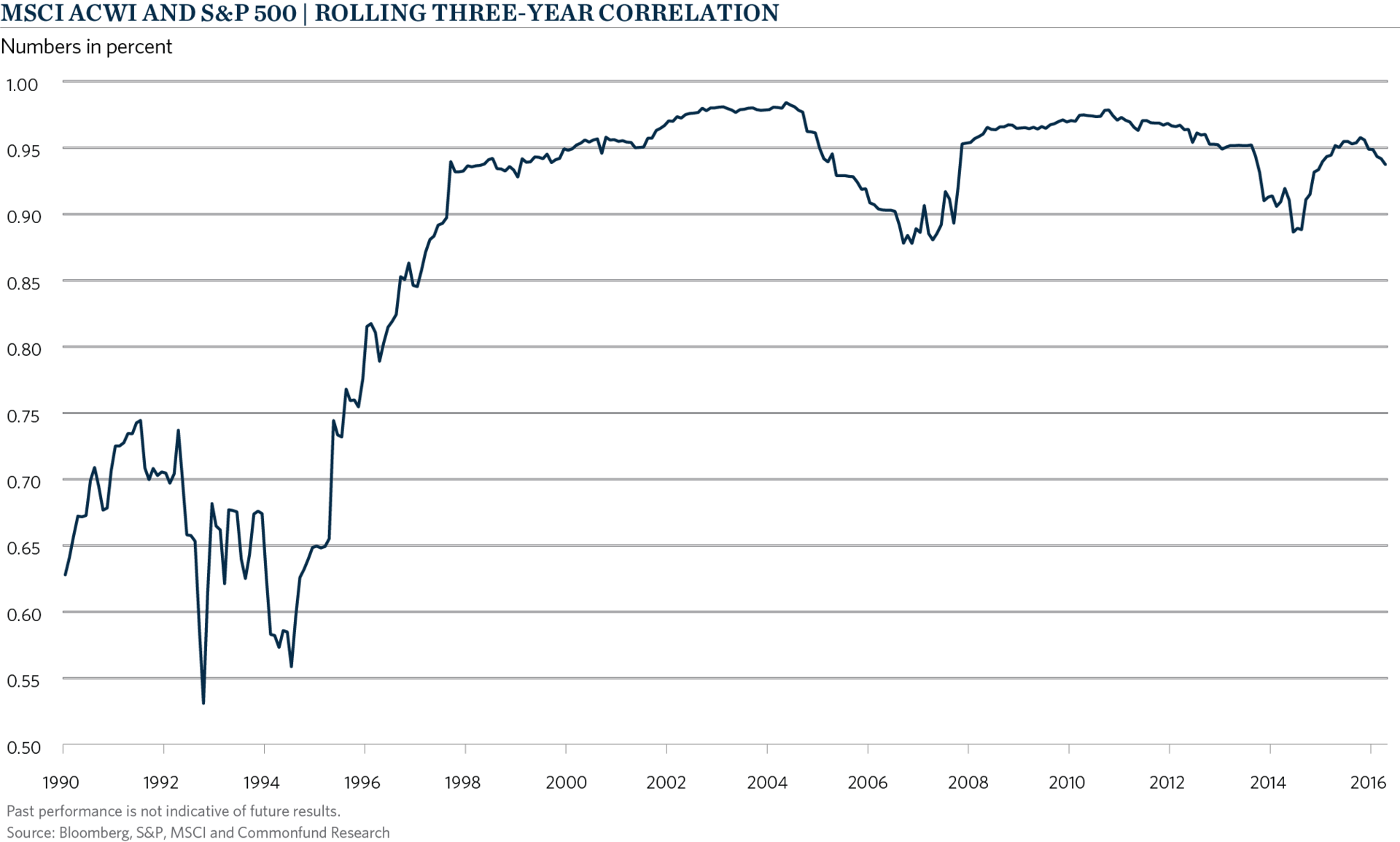 Yet, despite this increased synchronization across economic borders there are still benefits with respect to a global equity benchmark. First, modern portfolio theory teaches us that the more you constrain your portfolio, the less efficient it becomes. Simply, you shrink your economic sandbox by committing to a domestic equity benchmark. Conversely, committing to a global benchmark like ACWI does not mean that you must follow the precise geographic weights contained within the global benchmark (roughly 55% U.S., 30% Development Markets ex-U.S., and 15% Emerging Markets). Instead, an investor can still retain the freedom to overweight the U.S. relative to international markets, while maintaining the largest sandbox available.

Think back to our example of Mercedes, Audi and BMW selling more cars in the U.S. than in Germany. If a U.S. investor were to limit his or her portfolio construction to only the U.S. equity market, there are only three independent car manufacturers remaining in the United States: Tesla, Ford and General Motors. That is a very limited bet on the auto industry. Conversely, outside the U.S., the auto industry is much larger—from Mercedes to Toyota to Hyundai. The larger the sandbox, the more cars you can play with in it. Further, if you commit only to the U.S., you only access about one third of Global GDP Growth, as seen in Exhibit 3. Even if correlations remain high, gaining access to other economic drivers of global GDP is a sensible (and economic) thing to do. 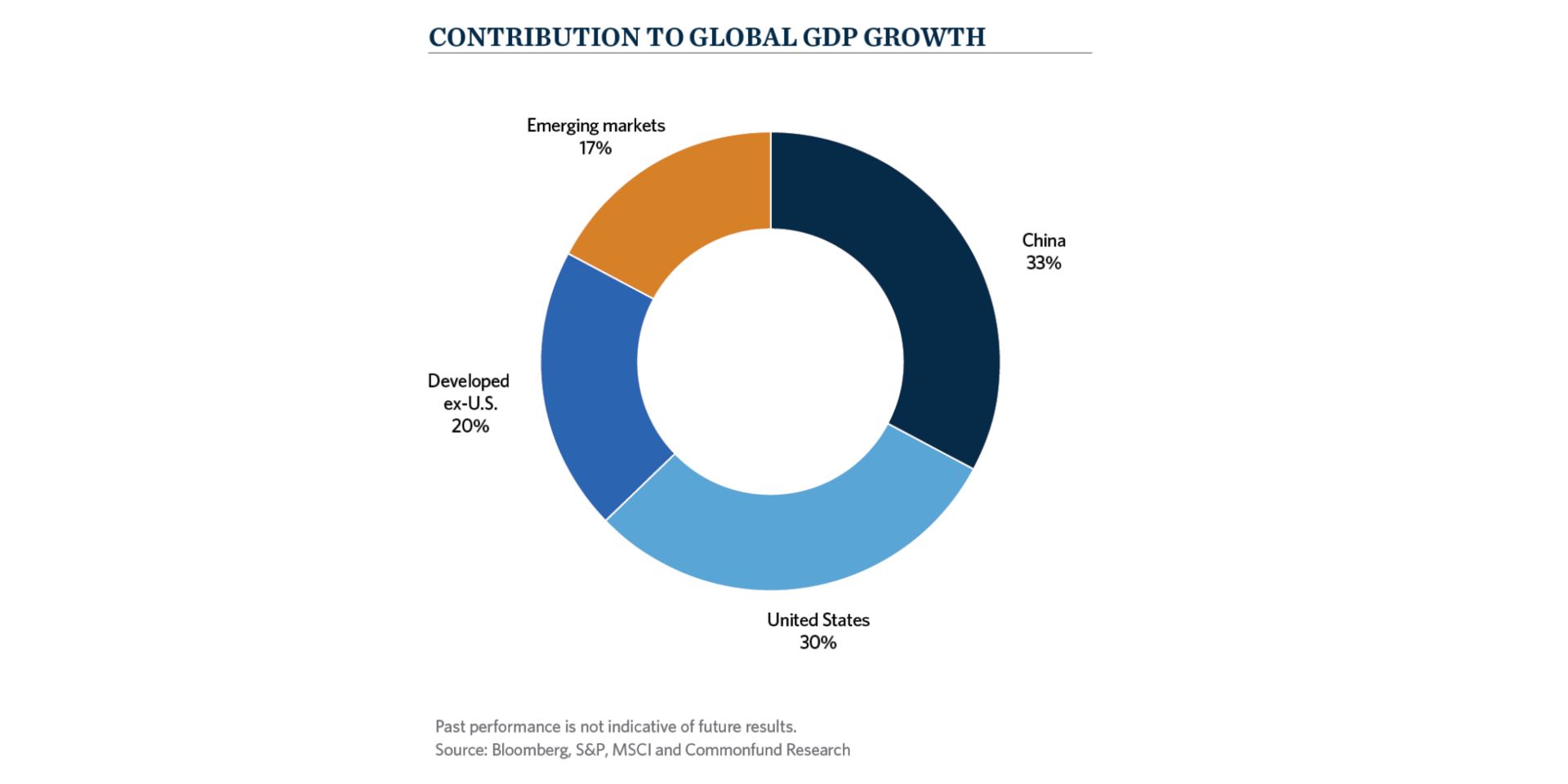 Lastly, this larger sandbox is even more important for institutions that choose to use active management for all or significant portions of their equity allocations. In the quest for alpha, we have found that providing active managers the freedom to search out and act on their best ideas globally is an important contributor to long-term performance success. This is all the more important in less efficient markets, like emerging markets that are a significant growth engine for global GDP, as well as for developed markets like Japan that might follow different fiscal & monetary policies than the United States.

This article was originally published in Pensions&Investments on June 2, 2017.