Like nearly everything in the financial markets, risk is cyclical.  History repeats itself.  The echoes of past crises are always heard in present ones, yet new crises are rarely predicted and not always properly planned for.  We are in the midst of one of the longest economic expansions in US history, 98 months and counting, trailing only the 120 month and 106 month expansions of the 1990s and 1960s, respectively.  There have been bumps along the way, but this has been an extended benign period for risk in the capital markets.

A few early indicators are starting to point to some weakness ahead.  The corporate debt to GDP ratio has returned to pre-crisis levels as corporations have taken advantage of historically low yields to deploy financial leverage and goose returns to equity holders.  The last four recessions in the US have all been preceded by excessive loan growth.  This cycle has been no exception with the Federal Reserve reporting bank loan growth in excess of 10% for 2015 and 2016.  Historically, this translates into softer underwriting standards (as we are seeing in auto finance where 90 day delinquencies have just hit a post-crisis high) and bank asset quality trouble, with potential bank failures appearing within the following 3-5 years.

The point here is not to try and predict the next economic downturn or the end of the current credit cycle.  More important is getting your risk management ducks in a row before the downturn happens and the turmoil eventually returns.  The further we get from the last financial crisis, the more market participants lose sight of the hard-earned lessons received during that time.  This is seen in market participants’ expectations of a stock market increase and the implied volatility of the S&P 500. 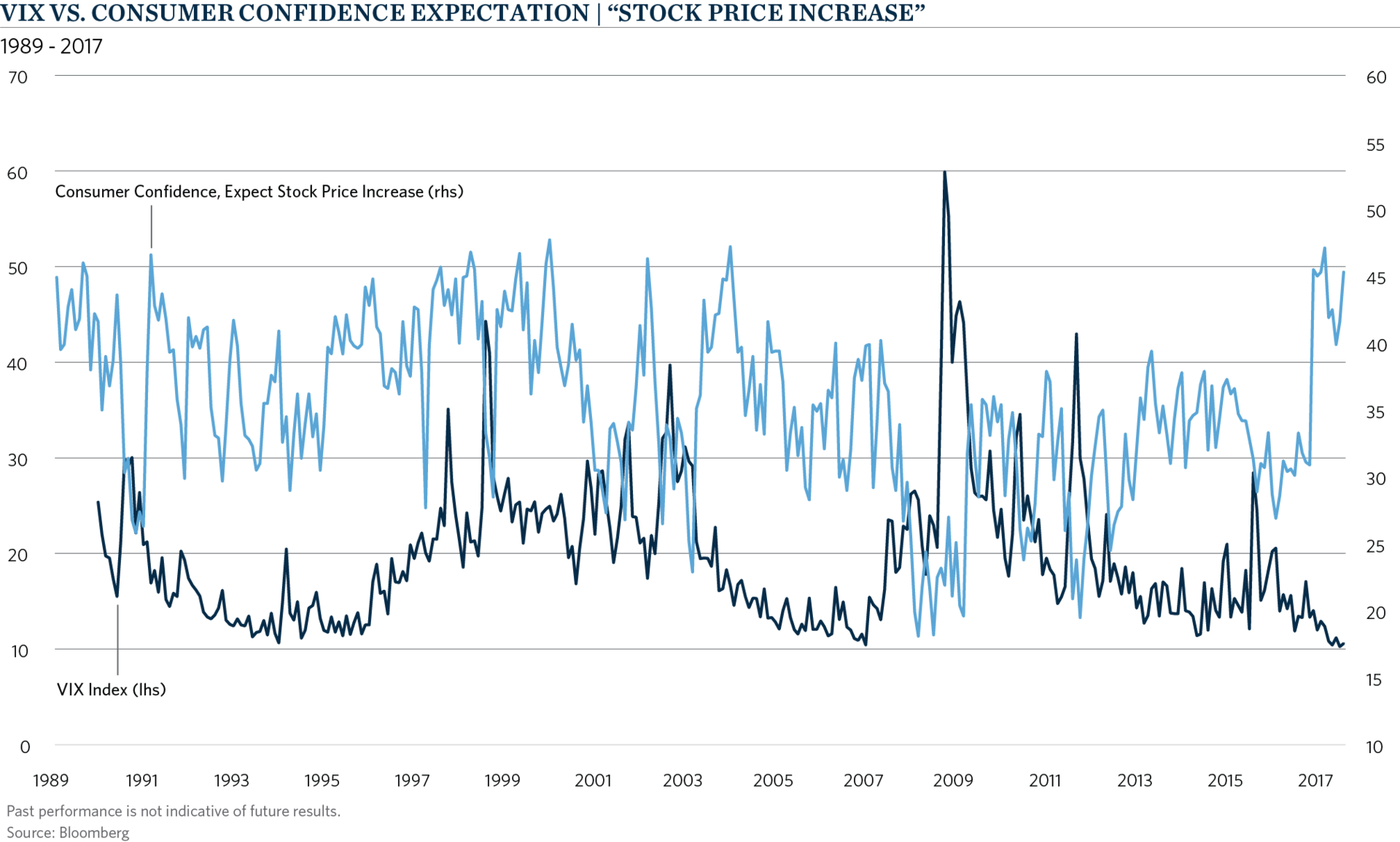 A counterparty risk analyst that started their career in 2010 now has 7 years of experience and hasn’t been through a major counterparty default.  As the events of 2008 unfolded, there were few responses in real time that had a meaningful impact on risk outcomes.  The actions that truly helped protect an investor during the crisis all took place well before banks started failing.

Documentation, collateralization, and exposure management are the three pillars on which proper counterparty risk defenses are built.  Investors need to ensure proper negotiation of trading documents to put their firm in the best position possible with respect to key trading terms.  They also need to make sure they have tight controls around collateral posting and monitoring to limit unnecessary risk.  And finally, the only way the proper emergency steps can be taken when the ice starts to crack is to fully understand what exposure exists with what counterparty.  All three of these steps can seem tedious, and tight controls around them may appear like overkill, during a benign credit environment.  Don’t fall into the complacency trap.

Shortly after Lehman Brothers had filed for bankruptcy and many investors had (temporarily) lost their shirts, one investment manager was still reporting incredible returns. Bernard L. Madoff Investment Securities.  Because of this firm’s great success, its investors tapped it as a source of liquidity when their other investments had all taken a nosedive.  By early December 2008, Bernie Madoff was facing $7 billion in client withdrawal requests and the jig was up.

Even if you were early in that line of client redemptions you lost almost everything.  Reaction time didn’t matter.  The only thing that could have saved you was effective and complete due diligence at the time of your initial investment, allowing you to see enough red flags to avoid the Ponzi scheme altogether.  Yet this was a time of strong market returns and greed had likely taken its cyclical place ahead of fear.  Today, and each day for the past eight years, was the day for proper risk management.

Another area where an investor must avoid complacent risk management is with the structuring of investment portfolios.  In a low yielding environment like this one, there are only a few places investors can turn in pursuit of excess return.  Three of asset management’s favorite tools are leverage, illiquidity and credit risk.  Each of these tools has their place in a carefully risk-managed portfolio, but each can be dangerous when portfolio managers are lulled into a false sense of security.  Careful independent monitoring of liquidity metrics, multiple measures of portfolio leverage, and exposure to changes in credit spreads are especially important in stable periods.  Rigorous stress testing and scenario analyses can indicate where portfolios are over-exposed.  These practices are important because once market volatility spikes many of the possible remedies to problematic positioning become closed to investors.

Don’t let widening spreads, struggling banks or investment manager fraud be your impetus for thinking about risk.  Risk is cyclical.  Ironically, complacency in risk management is itself a cyclical risk.  The longer that a benign period persists, the greater and nearer the risk of taking your eye off the ball becomes.  To make matters worse, the further we get from the last crisis, the greater the potential magnitude and likelihood of the next crisis grows.  Take the necessary steps and precautions now to limit the damage in the future.