2022 began with one of the worst market performance periods since 2009. While the tech-heavy NASDAQ index looks to finish January with a loss of around 10 percent, value equities will likely record one of their best starts in many years, driven by gains in the energy sector, and sparking a renewed discussion about a rotation from growth to value stocks.

Increasing energy prices caused by years of underinvestment and strong demand growth from consumers have finally created an environment where energy producers are growing revenue. At the same time, financial stocks, another value sector, are benefiting from rising interest rates. Treasury yields have quickly moved higher as investors expect that the Federal Reserve will lift rates earlier, increase the pace of tapering and begin to reduce its balance sheet in 2022. Just four months ago, market consensus was that the Fed would not begin to hike rates until 2023 and now the market expects three, four or even five 25-bps hikes this year, with speculation of a 50-bps hike in March. However, despite the recent leadership of value stocks, higher inflation and a tightening Fed stance, we believe investors are unlikely to abandon growth stocks in 2022, albeit with a shift in focus to higher quality companies. We’ve seen this scenario before. Over the past three decades, there were four periods of rate hikes by the Fed during which technology was among the best performers. 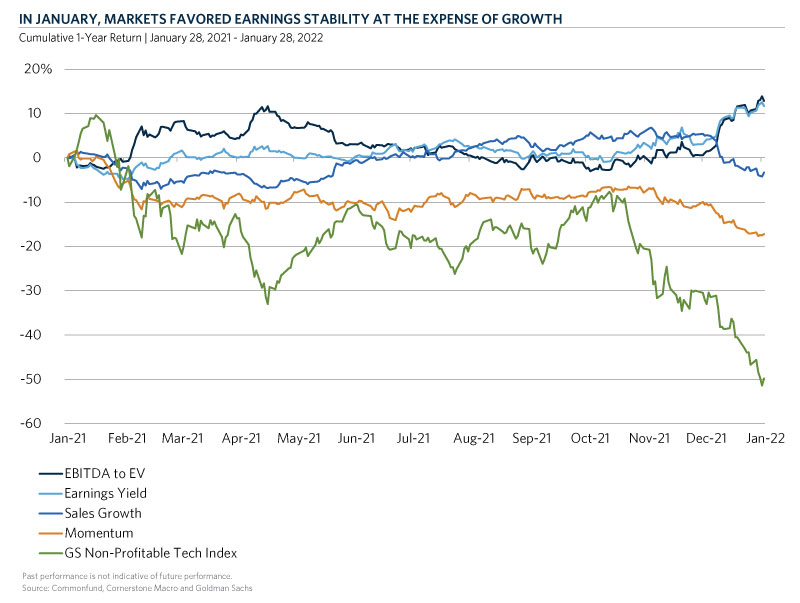 Concerns about a potential correction in the U.S. stock market have been ongoing for most of the past year as valuations remained expensive relative to history and the rest of the world.  Increasingly bearish positioning can now be seen in a variety of indicators, including the record volume of put options and the most bearish individual investor sentiment since the first half of 2020. However, when we look at the make-up of the decline, one can see that it was concentrated in the high-growth, no-profitability names. For example, our chart of the month shows that stocks with high sales growth and momentum factors, as measured by the difference in returns of the highest and lowest quintile of stocks in the S&P 500 index, declined by 8 and 7 percent in January. Additionally, the Goldman Sachs Non-Profitable Tech Index which consists of non-profitable U.S. listed companies in innovative industries was down 27 percent in January and 50 percent in the last year. The year-to-date sell-off appears to be mostly due to worsening sentiment toward some sectors, rather than the result of falling earnings, which are expected to climb by 19 percent in the fourth quarter vs. the prior year. When we look at the valuations of growth companies and value companies in the S&P 500 index, the price-to-earnings premium that growth equities commanded over value equities has returned to its pre-pandemic levels, erasing the impact of COVID-19. Nevertheless, fundamentals for equities overall remain strong as reflected in the attractive equity risk premium relative to bonds.

At Commonfund, we strive for balanced factor exposures within our public equity portfolios. Specifically, our managers focus on companies with strong fundamentals and sustainable earnings growth while maintaining exposures to low-volatility strategies which have benefited so far from the erosion in investor sentiment.