The “Divorcification” of Stocks and Bonds

It has been a difficult start for traditional portfolios of stocks and bonds in 2022 as the usual diversification benefits of these asset classes have failed to materialize. As high inflation remains rampant and the Federal Reserve faces the challenging task of cooling the economy while avoiding a hard landing, investor sentiment has turned decidedly negative. In less than 12 months financial conditions have gone from the most accommodative to the most restrictive in many years. The U.S. dollar recently touched a 20-year high as investors flocked to the safety of the world’s reserve currency. High food and energy prices continue to wreak havoc on personal and corporate balance sheets while rising interest rates have diminished the ability to service debt. 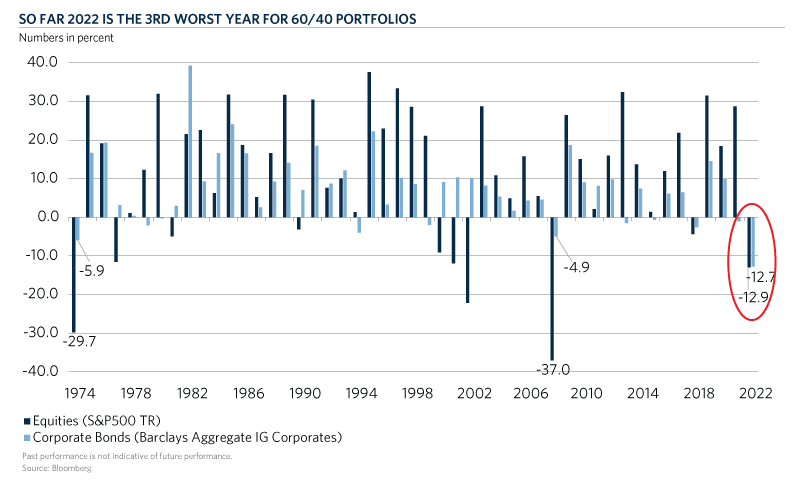 As shown in this chart of the month, if 2022 ended in April, it would represent the third worst annual performance for traditional 60 percent equity/40 percent bond portfolios since 1974. Of note, 1974 and 2008 were the other two years with similarly poor performance, both following a significant rise in energy prices. In equities, the recent move can largely be explained by valuation compression as earnings have shown surprising strength in the first quarter. Results have exceeded expectations with around 60 percent of companies in the S&P500 index beating both sales and earnings consensus, prompting modest upside revisions for 2022 and 2023, led by Energy. Year-over-year, earnings have improved by 7-10 percent with growth projections for the full year 2022 of 10 percent due to expectations of a stronger second half. However, this outlook has not been shared by all, as some investors fear the downside in earnings if the economy dips into a recession and the Fed continues to tighten. The consensus forward P/E multiple has also declined to around 17x from 21x at the start of the year as interest rates increased. Real interest rates surged from a negative 100 bps in the beginning of 2022 to a positive 25 bps in the first week of May, their first positive reading since early 2020. In addition, corporate risk has also risen with investment grade corporate credit spreads increasing by 40 bps. As a result, the Barclays Aggregate Corporate index has suffered its largest annual decline since 1973.

The current environment has called into question the ability of bonds to protect portfolios during equity market declines. Looking forward, the path for equities and fixed income will depend on both the outcomes of the Russia/Ukraine war and the Fed’s battle against inflation. The conflict continues to boost commodity prices which in turn makes the Fed’s task of reducing inflation even more challenging. The average probability projection of a recession over the next 12 months is around 25 percent with some estimates that the market is currently pricing a 50 percent probability given current earnings and valuations. According to Goldman Sachs analysts, median earnings have declined by 13 percent on average during recessions since 1949. If the S&P500 sustains a similar loss, it would represent a 24 percent peak-to-trough decline, surpassing the median fall of previous recessions.

At Commonfund, we continue to believe in a balanced approach in equity portfolios while implementing diversifying strategies such as opportunistic and private credit in fixed income portfolios. In addition, after many years of challenging results, we are seeing significant value produced from allocations to alternative strategies, including hedge and natural resources. Finally, private equity investments continue to be critical components to achieve target returns as traditional portfolios appear to face multiple risks.