Viewpoint | Why are Gifts to Endowments Declining?

For the third straight year, Commonfund Benchmarks Study® of Independent Schools (CSIS) participants reported average new gifts to endowment declined, this year falling to an average of $1.2 million from $1.5 million in FY2019. Moreover, new gifts declined for schools in each of the three size cohorts. Figure 1 below charts the trend over the past decade.

What happened? Looking back, giving was fairly consistent in the first half of the past decade, but trending higher. Slow growth from a relatively low base may be traced to the lingering effects of the 2007-2009 market collapse and Great Recession. Later in the period, it is possible that year-end giving in calendar 2018 (second fiscal quarter of FY2019) was negatively impacted by a sharp sell-off in the equity market. But that was a one-time event, as equity markets recovered and have since reached new highs. It is more likely that we may be seeing the effect of the Tax Cuts and Jobs Act of 2017, which effectively doubled the standard deduction and, in so doing, eliminated the charitable deduction for millions of taxpayers who could no longer itemize their tax returns. This meant that that those who could still afford big gifts and get the deduction had more demands on their money since most of those giving smaller amounts couldn’t afford to be quite as charitable. This could also explain the bump in FY2017, as people accelerated giving to take the tax deduction before it expired. 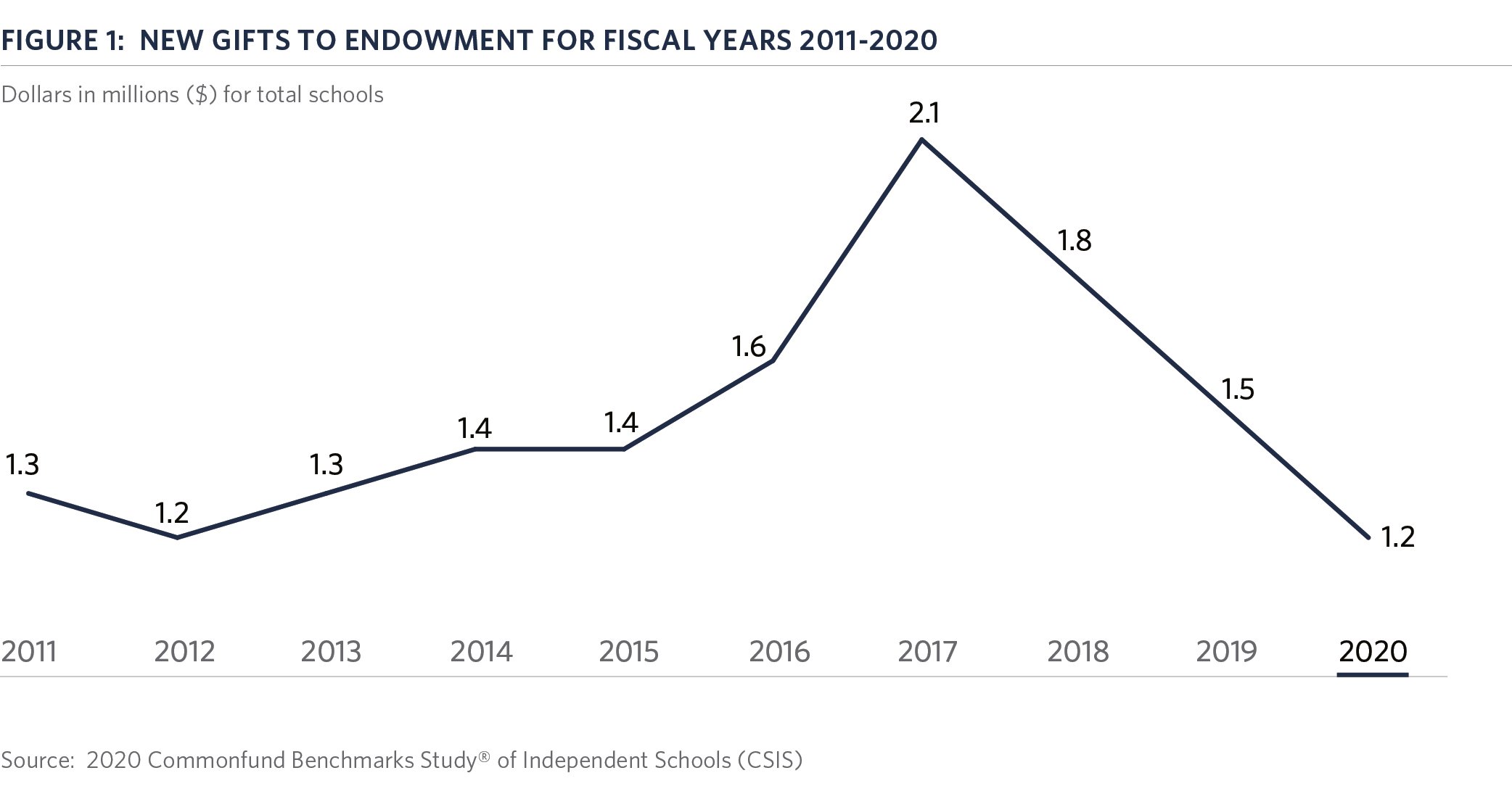 Observations from experienced professionals at the National Business Officers Association (NBOA) provide insight into another trend to emerge over the past few years. Independent schools have seen donors who are financially able to give large sums of money become more sophisticated in their philanthropy. Some of these donors want to see tangible results of their investment in schools and expect a return on investment. A gift to endowment does not always meet this new criterion.

Another consideration is that, for some schools, the more immediate financial need is gifts to the annual fund rather than gifts to the endowment, which is a more long-term strategy. Since the 2008 financial crisis, the independent school business model has struggled, being very dependent on tuition dollars. The gap between what schools charge and what they collect in tuition has been growing with the rise in tuition discounting (financial aid). Some schools need donor dollars to fill those annual gaps rather than growing the endowment for the future.