In late 2018, Commonfund established a Diversity Office with the objective of benefiting from the strengths that diversity can provide by fostering an environment that embraces differing perspectives and challenges conventional thinking. The initiative reaffirms Commonfund’s belief that diversity is a critical component in developing a dynamic workforce and constructing robust investment portfolios. An authority in this field spoke at Commonfund Forum 2019.

The following are excerpts from remarks by Katherine Phillips, the Reuben Mark Professor of Organizational Character at Columbia Business School and Director of the Bernstein Center for Leadership and Ethics. A social psychologist, she received her undergraduate degree from the University of Illinois at Champaign-Urbana and a PhD from the Stanford Graduate School of Business. 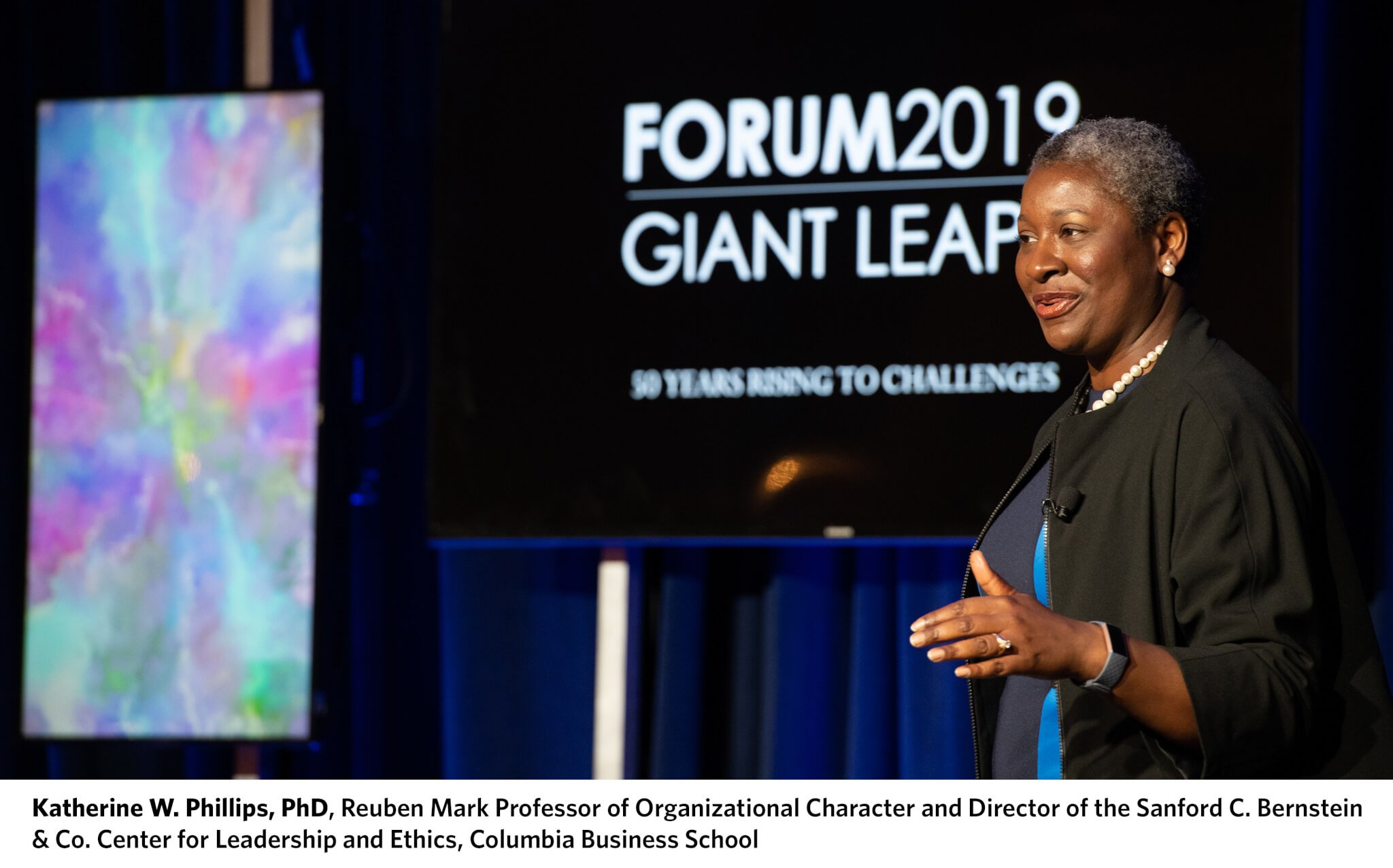 My story in brief: I was born on the south side of Chicago and grew up in a neighborhood that was predominantly African American. I was the last of six children. In third grade, I was introduced to the gifted and talented programs in the Chicago public schools and bussed west into a neighborhood where I wasn’t particularly welcomed. I remember the day we were sent back home on the school bus because the school had been vandalized. People in the neighborhood were not happy to see us there. Later I went to the University of Illinois on an athletic scholarship in track and field.

I live and breathe the issue of diversity and inclusion and find that my own personal experiences absolutely shape the way I see these things. Now, I’ve only been speaking for a couple of minutes, but you know some important things about my life story. I encourage you to think about your own stories because it’s important for people to individuate who they are. Let me ask you: What’s your story?

I have been studying diversity for 20-plus years. In the late 1990s there was a big workforce 2000 mantra that was all about how the world was going to change. When you look at the media now, you see that there’s lots of research on the effects of diversity. McKinsey has a report looking at 366 public companies that found if there are women or people of color in your organization—if you outstretch your competitors on those two dimensions—you outperform them by 15 percent and 30 percent, respectively. A colleague of mine who used to be at Columbia has done some research looking at 1,500 S&P companies and found that having women in top management ranks generated substantially more value for those firms. Clearly, there’s research evidence out there showing a linkage between diversity and outcomes. And it’s true not just of racial and gender diversity. There’s research showing that if you look at an index of six different types of diversity you again see that linkage to outcomes.

So, why are people not convinced? Partially because the research evidence is correlational. It shows that there’s a relationship between outcomes and diversity, but it doesn’t show that diversity causes these improved outcomes. And some people argue that firms that are doing well are more open to change and more welcoming of diversity. So, when I started doing research in this area, I wanted to know about human behavior. What happens when you put people together who are different from one another and ask them to work as teams to solve problems? Do they outperform other teams that do not have that diversity? That led to a paper I titled “How Diversity Makes Us Smarter.”

The paper describes the research where I brought various groups together and asked them to read background information about a problem—they varied from which one of several companies they should choose to invest in to which one of several people should be hired to which one of a few people may have committed a murder. There’s a right answer to each problem. How do I know? Because the problems were created to have clear solutions if all of the available information was fully considered.

In the real world, we don't always know the right answer. We can’t be 100 percent sure, for example, that we have constructed the right portfolio or produced the best product. So, I had my participants think about their problem individually and then they came together in a group to talk. I videotaped their interactions, so I knew exactly who said what to whom. I also made sure that no two people would know exactly the same thing about this problem. I did that because when we put people together in a group we do so because we want them to learn from each other. If they all know exactly the same thing, we don't need the group. Working together they came up with a group decision, and I asked them afterwards, “How did it go? Were you effective? Did you get the right answer?”

You should know that in these problems there were four options. If you flip a fair coin four times, you would get it right 25 percent of the time. I’ve done this now with thousands of people, and I’ve repeatedly seen the same results: Homogeneous groups tend to get it right about 54 percent of the time. Diverse groups outperform them, getting it right about 75 percent of the time. I’ve used lots of different kinds of social category differences. I’ve used race and what your political affiliation is. I’ve also used factors like the side of campus people live on. I can split any audience in half and say, “You people on my left, what do you think? You people on my right, what do you think?” I can create any number of microcosms of the world.

When I ask them how it went and how well they worked together, I also ask them, “On a scale from zero to 100, how confident are you that you have the right answer?” I see this pattern of results over and over again: The homogeneous groups say, “We were great. We worked really well together.” What’s interesting is that they are far more confident than their diverse counterparts.

If I just tell people that they will be going into a conversation with somebody who’s different from them they will start to change their cognitive processing.
— Katherine Phillips

What we’re seeing is what I call the delusion of homogeneity. People really believe in that homogeneous context. In the process of having their group discussion, they don't dig deeply into the information they’ve been given. They don't talk as deeply about their different perspectives as the diverse groups, and they walk away feeling like everything went great and they got it right. It has nothing to do with how they actually performed. The diverse groups actually do modulate their confidence in-line with whether they got it right or not. So, we can see we’re dealing with a problem here. The problem is that I know diverse teams can outperform homogeneous ones, but convincing people that’s true is difficult. 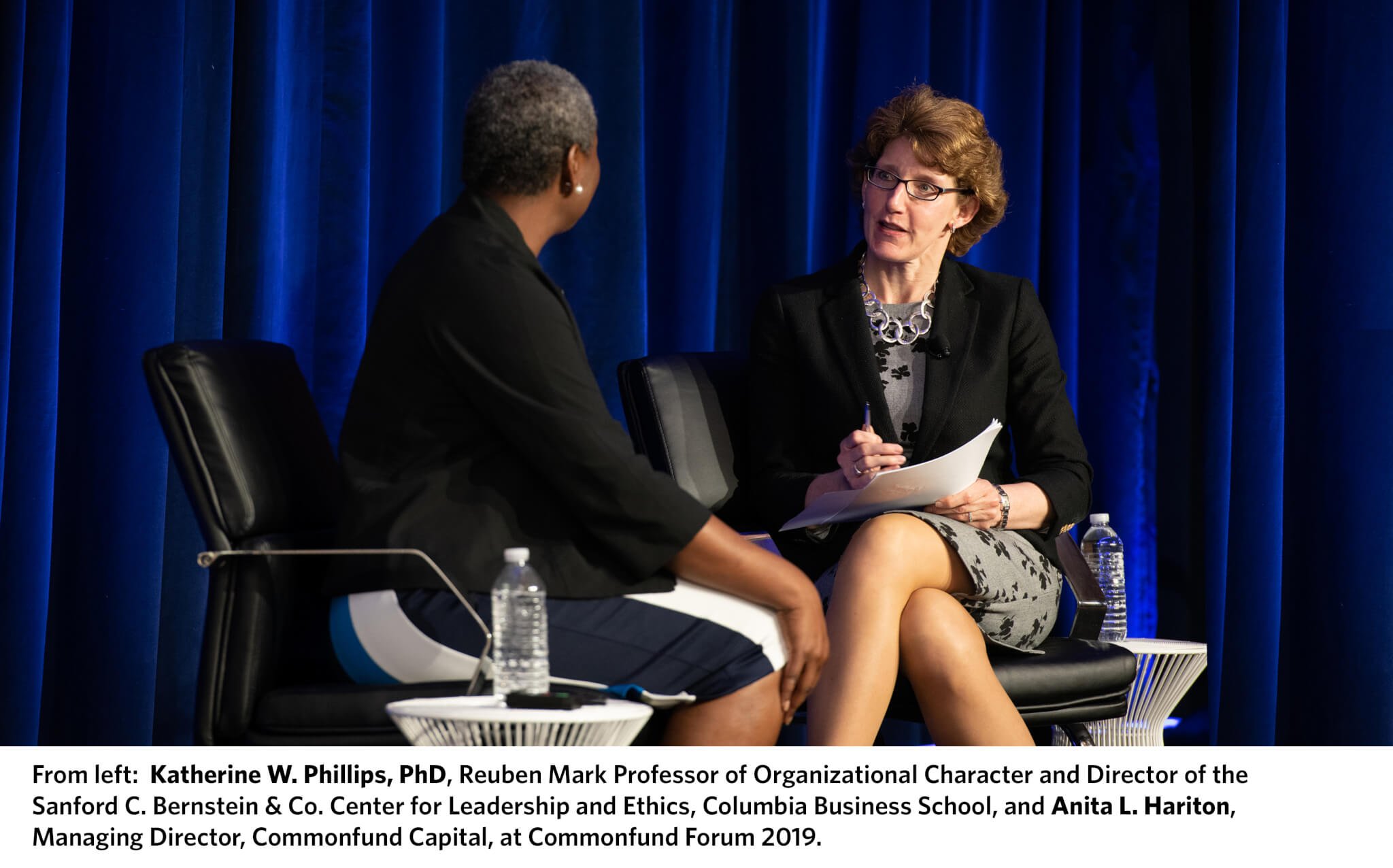 I want to show you one more research finding to help you understand how deep this goes. I had a hunch that the process of performing better as a group in diverse environments starts to happen even before people get into the group. If I just tell people that they will be going into a conversation with somebody who’s different from them they will start to change their cognitive processing. We call it pre-meeting elaboration. We basically show that if we ask you to write just a little statement about why you think what you think before you go into the group conversation you actually think more deeply about the problem. You are better prepared to go into that group conversation, and it shows up directly in performance. In other words, groups that are diverse end up performing better because individuals think more about the problem before they go in.

So, when people see social category diversity it triggers them to look for different perspectives. It enhances pre-meeting elaboration, information sharing and integrative complexity, which is just looking at multiple sides of the problem. You come to realize that your way of seeing the world is not the only way of seeing the world. People work harder in environments that they know will be diverse. But people are cognitive misers, a term that basically means we’re just lazy.

People are cognitive misers because they prefer to be in an environment where they’re comfortable, where no one will challenge them. You can imagine that as I walk into many rooms, I’m making the environment more diverse by my mere presence. I’m messing up the comfortable vibe you had going in. I’m going to give you an analogy—the gym. You go to the gym to become uncomfortable—you’re going to use your muscles to feel a little pain, some stress. You know if it’s a good workout. You start to sweat. It may not be particularly comfortable, but we know we are getting long-term benefits that make what we’re experiencing at the moment worthwhile.

That’s kind of how diversity works. There will be moments where you’ll be uncomfortable. That discomfort—we should welcome it. We should embrace it, and we should be looking for it again and again because it delivers so many long-term benefits.

Environmental, social and governance (ESG) factors are a topic for active discussion in board rooms. Here’s an update on Commonfund’s thoughts and actions and how ESG may relate to you. In general,...
Private Equity | Articles