In a series of articles, we have addressed two recent investment “fatigues” experienced by institutional investors: Active vs. Passive; and Global (ACWI) vs. US benchmarks.  In this article, we tackle the third and last “fatigue”— Hedge Funds.  Hedge funds have come under extreme criticism lately for their expensive fee structure, lack of performance, and too much “beta” wrapped up in an “alpha” fee structure.  It appears that hedge funds are run more for the amusement of the hedge fund manager and less for the benefit of the hedge fund’s clients.  These are all legitimate concerns but we still believe that there is value to be found in Hedge Fund Land.

The Rise of Hedge Funds

First, let’s take a step back in time.  The surge in hedge fund investing began with the popping of the Tech Bubble in the early 2000s.  Back then, the United States and every other developed equity market in the world suffered double digit declines for three straight years from 2000-2002. Yet, during this market downturn, hedge funds actually lived up to their name—they hedged the market downturn.  Over this time period, the S&P 500 declined a total of 37.6 percent (-14.5% per year) while the HFRI Composite Index of hedge funds increased by 8.2 percent (2.7% per year).  This is demonstrated in Exhibit 1.

Not surprisingly, the performance of hedge funds over this market downturn led to a surge of interest by institutional investors and, subsequently, the total assets under management in the hedge fund industry grew quickly.  Exhibit 2 demonstrates this growth in AUM.  Perhaps even more revealing, Exhibit 3 shows that the number of hedge funds also grew rapidly and now exceed the number of mutual funds in the U.S.— a demonstration of how quickly merchants set up “new rides” in Hedge Fund Land. 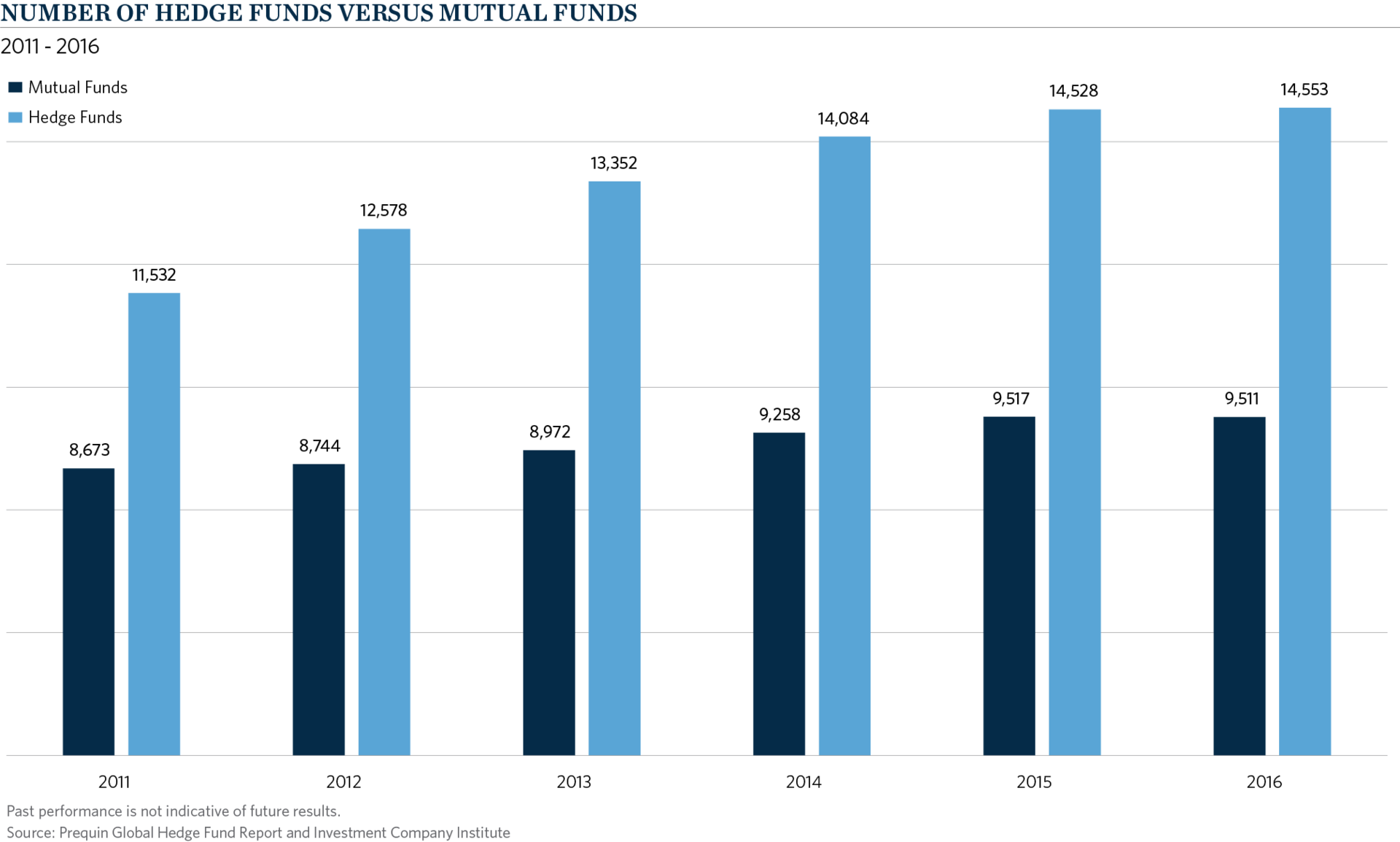 Unfortunately, with so much money flowing into hedge funds, this segment of the asset management industry has become as crowded as an amusement park on the 4th of July.  And this crowding has reduced the amount of alpha (excess return) available for hedge fund managers.  Simultaneously, more beta (market risk) has crept into the portfolios of hedge fund managers.  If alpha is scarce—and, indeed, it is—not all of the capital in Hedge Fund Land can be allocated to alpha generating rides. Some of this money must inevitably find its way into good old fashioned market beta.  Exhibit 4 demonstrates that as more asset managers set up booths in this new theme park and sold more tickets to get on the hedge fund carousel, more market risk began to creep into their portfolios.  Yet, hedge fund managers continued to charge their “2 and 20” fee structure despite a slower moving carousel.

An Over-Crowded Amusement Park Just Isn’t as Much Fun

So, what are the alternatives to this expensive theme park?  First, there are daily “specials.”  That is, hedge fund managers are more willing to negotiate fees than ever before.  The old “2 and 20” fare to get on the hedge fund carousel is dropping quickly for savvy investors.

In summary, we still believe that hedge funds have an important role in portfolio construction.  However, investors must be prepared to negotiate fees to take advantage of daily “specials” and to use newer risk tools to ensure that they pay only for the alpha rides in Hedge Fund Land.