For investors building multi-manager portfolios, a look at an alternative hedge fund beta.

Approaches to stock selection vary widely across the hedge fund universe, even among managers practicing the same strategy. Valuation, potential catalysts, time horizons and technical factors based on price history all influence decisions to own a stock, both in terms of names and position sizing and hedging. A name that is attractive to one manager may leave another unmoved, or escape consideration altogether.

Such variation is a natural result of underlying diversity in core competencies and sources of “edge,” as well as manager DNA. For example, some may be strict adherents to value in the tradition of Warren Buffett or Benjamin Graham, while others may target attractive growth stories. Other managers may have grown up on bank merger desks and focus on stocks with the potential for corporate actions, such as acquisitions or spin-offs.

Still others may specialize in sectors, use quantitative screening methods or seek out activist opportunities, holding large concentrated positions, often over multi-year horizons.

For investors constructing multi-manager portfolios, there is a strategic benefit to taking advantage of this diversity. Narrow areas of specialization can be combined in the same portfolio to generate aggregated underlying positions that reflect differentiated sources of alpha.

And yet, in a multi-manager portfolio, duplicate positions are not uncommon and are, perhaps, inevitable. The sources of such overlap are far from clear. Is it random, or are there other gravitational forces pulling managers into the same names? How extensive is overlapping, and is it necessarily bad? As an investor, how do I measure and manage this “risk”?

Investors might be inclined philosophically to respond to overlap in a few ways. They may, for instance, infer that if more than one manager is drawn to the same stock it only strengthens the investment thesis and, perhaps, makes that name more attractive. A reasonable conclusion, but one must also imagine the potential downside. It introduces an additional form of risk—one that relates to being widely held and, in some small way, connects a manager’s performance and buy and sell decisions to hundreds of other hedge funds.

Goldman Sachs publishes a “VIP” Index of the 50 U.S. equities most widely held by hedge funds based on brokerage and 13F statements. The firm also publishes a counterpart “VISP” index of the most widely held short positions. Based on the premise that the performance of commonly held positions does, in fact, influence a portfolio, the GS VIP Index can then be applied to estimate the effects.

Our research suggests that widely held positions can ‘undo’ some of the benefits of thoughtful hedge fund portfolio construction, and produce a form of risk exposure to the broader universe of hundreds or thousands of hedge funds.

The VIP Index has a number of interesting properties. First, it has outperformed both the broad S&P 500 Index and the VISP over its history. At least superficially, the outperformance may seem to corroborate the idea that the VIP represents “smart money,” i.e., the aggregated picks of elite managers. Insofar as it does, an investor may even welcome the exposure.

But the VIP can also underperform, and these periods have often been particularly unfavorable for hedge fund investors. Gaps in the rolling relative performance as shown in the chart below include the so-called credit crunch of 2002, the credit crisis of 2008, and, perhaps most significantly, an extended stretch in 2011, a period that many hedge fund investors associate with broad and protracted underperformance relative to broad markets. (The chart somewhat masks the severity of these periods of underperformance as it displays rolling 12-month returns.)

VIP-like effects can also be magnified in relatively benign markets. Hedge fund investors may still have fresh memories of the so-called “spring 2014 rotation,” the period in March and April of this year that was unusual for hedge funds’ relative performance. Many funds experienced disproportionately negative returns, even as equity markets generally finished flat to positive. Amid a brief but severe two-month downdraft, with widespread position shifting and rumors of emergency selling, exposure to popular names stood out as a key predictor of poor performance. And, the VIP demonstrated one of its worst two-period sequences relative to both the S&P 500 and the VISP. 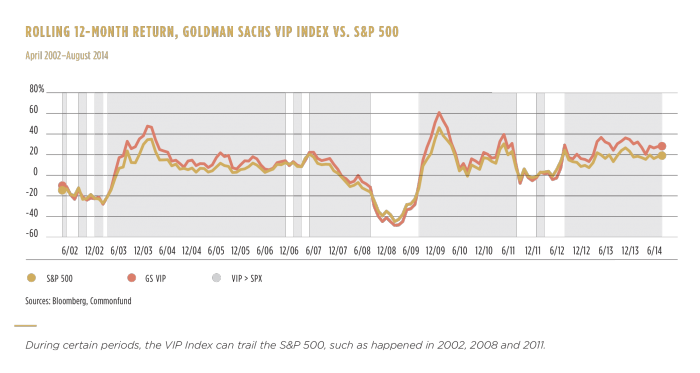 For these reasons, it may make sense for hedge fund investors to evaluate VIP-like exposure as a beta risk—that is, as a source of systematic market exposure, as opposed to an unmeasured, idiosyncratic source of alpha.

One statistical approach is to consider the relative performance of the held-long VIP versus the held-short VISP on the premise that the spread of the two indices is sensitive to hedge fund-specific market conditions. Put another way, in periods of accelerated market activity, names that make up these two indices are especially vulnerable to accelerated selling on the long side and covering on the short side. While over the long term the VIP should outperform the VISP, technical pressure may create the opposite effect and, for that reason, the spread may make an interesting beta factor.

VIP-VISP can correlate to HFRI Index

Looking more closely, the factor (VIP-VISP) is a statistically significant predictor of returns of the HFRI Equity Hedge Index. The chart on this page represents the return of the index in terms of exposure to five common risk factors. The results suggest that for the equity hedge strategy, VIP exposure can be considered separate and distinct from the other factors that are accounted for—in this case, including small cap, value and momentum. In other words, it would not be quite correct to suggest VIP-VISP is simply a proxy for growth versus value or small cap versus large.

The VIP-VISP beta itself may, therefore, represent not just the idiosyncratic risks of 50 stocks, but the risks of hedge funds’ accelerated buying or selling. For this reason, it may be helpful to consider VIP-VISP exposure as “popular” in benign conditions but with the potential to become “crowded” in adverse conditions, and to consider it separately from those other forms of hedge fund risk. 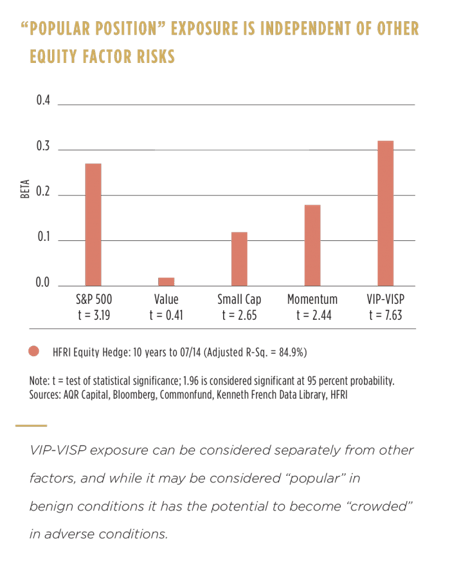 Such an interpretation may be supported by evidence from broader HFRI hedge fund strategy universes. Consider the census of 4,000-plus reporting managers tracked in the chart on the following page. By universe, the chart estimates statistical effects of the exposure for each of several thousand managers after accounting for other headline risk factors specific to each strategy. On the chart, if a point is aligned with 15 percent on the (up-down) y-axis, and 86 percent on the x-axis, it indicates that 15 percent of a manager’s return can be explained by VIP-VISP exposure, and by that amount, it would be larger than 86 percent of other managers within that universe. In other words, it gives a sense of distribution and scale: where does the exposure tend to occur and how large is it?

All strategies reflect some exposure to risk factors

Not surprisingly, exposure is significant for “equity hedge,” particularly for U.S. and global U.S.-based managers (but not global ex-U.S. managers). All strategies, however, reflect some degree of exposure. That includes strategies, such as macro, that are not characterized by single-name stock selection. For investors constructing multi-manager portfolios, however, it is meaningful that the fund-of-funds strategy demonstrates the most widespread and significant exposure, including relative to the equity hedge index itself. In that the beta risk represents exposure to other hedge funds, it makes sense that the fund-of-funds strategy would be the most sensitive to this risk. It also underlines the significance of this form of exposure for investors constructing multi-manager portfolios. This carries several practical implications. 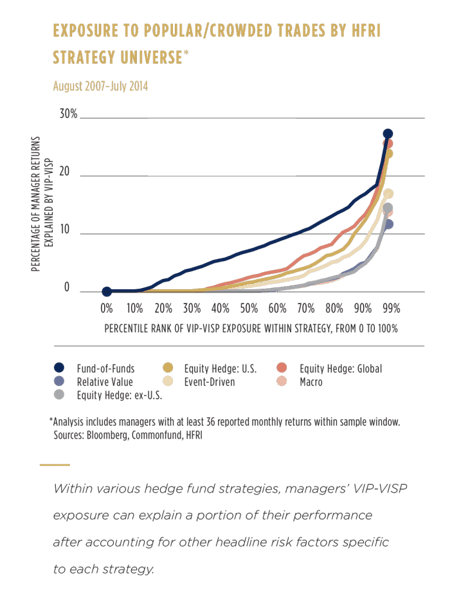 First, it is worth repeating—emphatically—that the VIP index outperforms broad equities over time, which puts a sort of asterisk on efforts to manage the factor risk it represents; as far as systematic risks go, it is, in many ways, relatively attractive. It is equally notable, however, that so-called conventional risk factors, such as small cap and value, also tend to perform positively over time (based on Fama-French SMB and HML factors). All of this suggests that this risk, too, is worth measuring and monitoring, and can improve and validate hedge fund portfolio diversification.

For investors in multi-manager hedge fund portfolios, a few conclusions suggested by the evidence include: Environmental, social and governance (ESG) factors are a topic for active discussion in board rooms. Here’s an update on Commonfund’s thoughts and actions and how ESG may relate to you. In general,...
Investment Strategy | Articles

Today, few OCIOs that serve nonprofits are total institutional partners. Six questions can help you find one who takes a holistic approach. Not long ago, the definition and scope of an “Outsourced...
Governance And Policy | Articles

The call for private and community foundation boards to embrace and demonstrate diversity at the senior leadership and board level has never been more urgent. Yet, with a growing base...