Viewpoint | The Climate for Responsible Investing is Changing

Climate change is a source of concern around the world—from environmental scientists to government policymakers to ordinary citizens. In a more figurative sense, the climate for responsible investing appears to be changing at foundations—and in a more promising way.

The Council on Foundations—Commonfund Study of Foundations (CCSF) has included data on and analysis of foundations’ responsible investing policies and practices for as long as the Council on Foundations and Commonfund Institute have teamed to produce it, and before that in Commonfund Benchmarks Studies of Foundations. Owing to the time demands that the global pandemic placed on foundation trustees and staff members we did not include a suite of questions on this topic in last year’s Study. This year, we return to responsible investing—and find that after two years the data show far more change than we have detected in previous periods.

We believe this change—and what it may portend for the future—demands heightened attention and have published a blog specifically on the diverse manager data collected from the Study.

The primary takeaway: The data show clear increases in the rates of adoption for various responsible investing practices. For example, in this year’s Study 19 percent of participating private foundations said they seek to include investments ranking high on environmental, social and governance (ESG) criteria versus the 14 percent that said so in 2018—an increase of more than one-third. The rate of ESG adoption showed no progress at community foundations, but no reversal either as it held steady at 20 percent.

The practice of screening out or excluding investments that are inconsistent with a foundation’s mission—generally referred to as socially responsible investing, or SRI—showed even greater growth among private foundations. Twenty percent of these foundations require/permit this practice, well ahead of 12 percent in 2018. Once again, progress did not show up among community foundations, where the rate of adoption declined one percentage point to 12 percent.

Allocating a portion of a foundation’s endowment to investment that further the institution’s mission made little to no progress since 2018. Fifteen percent of private foundations implemented this practice, up just one percentage point, while 12 percent of community foundations do, representing a retreat from 16 percent in 2018.

Among the size/type categories, the data show no clear pattern. In some instances, there are dramatic gains; for example, among private foundations with assets between $101 and $500 million:

In some cases, the data showed no change; importantly, however, nowhere were there significant reversals of direction from the levels of two years ago. 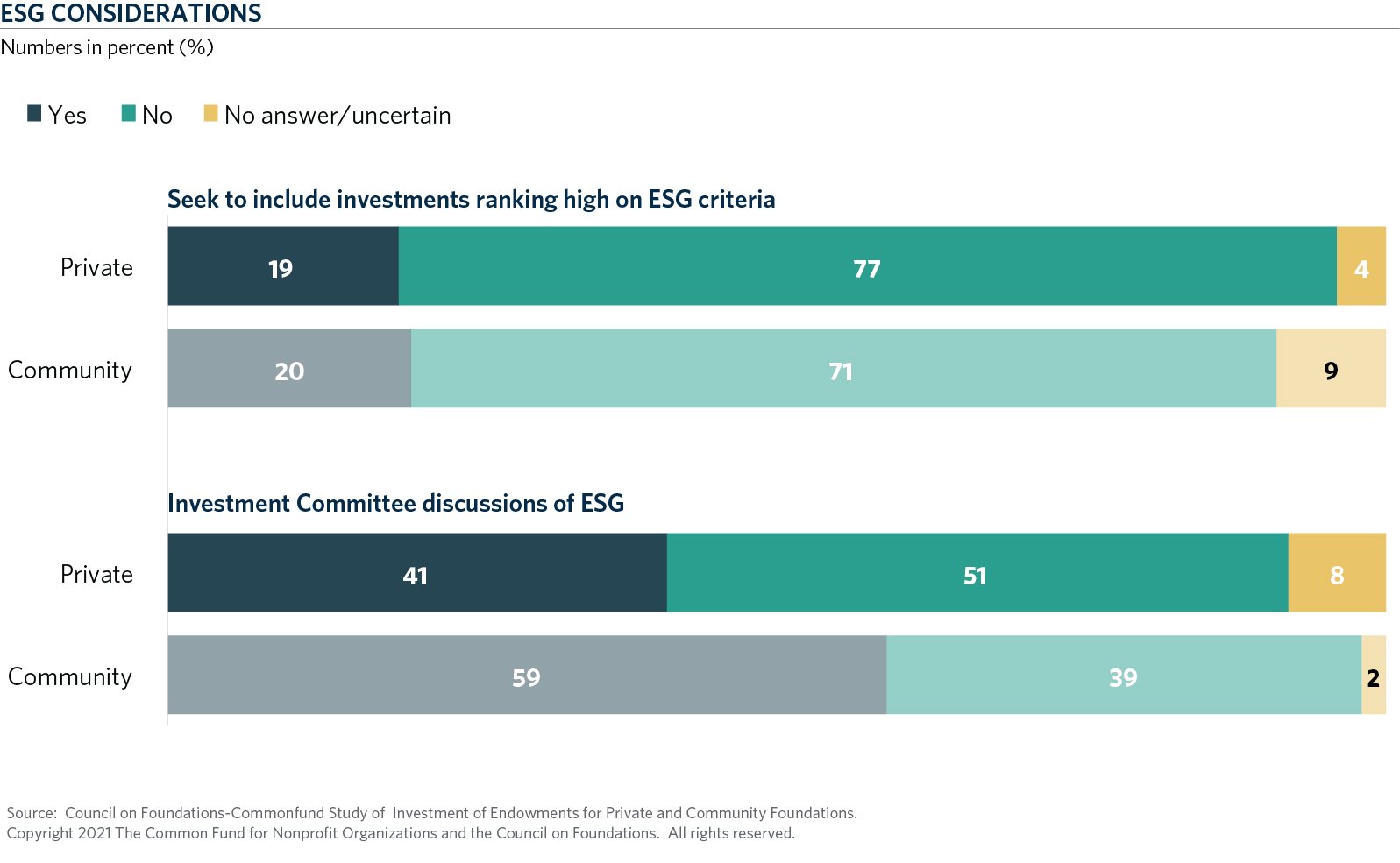 The numbers were less impressive for SRI discussions, but represented growth nevertheless. Twenty-eight percent of private foundations discussed SRI versus 26 percent two years ago while 49 percent of community foundations did so, up from 44 percent.

Impact investing showed little movement. Forty percent of investment committee held discussions on this topic in 2020, up one percentage point, while 52 percent of community foundations did so, a slippage of two percentage points.

Looking ahead, data suggest the climate should be more welcoming in the next 12 months. Seventeen percent of private foundations said they were considering adding ESG to their IPS in the next 12 months, more than double 2018’s 8 percent. Similarly, community foundation responses indicated more than a doubling of the 2018 rate from 14 percent to 29 percent.

In a related question, we inquired about motivating factors behind the decision to divest from fossil fuels. Forty-four percent of responding private institutions said it was an economic decision while 68 percent said it was an ethical one. Twenty percent said it had some other basis. (Multiple responses were allowed; there were not sufficient community foundation replies to permit reliable analysis.) 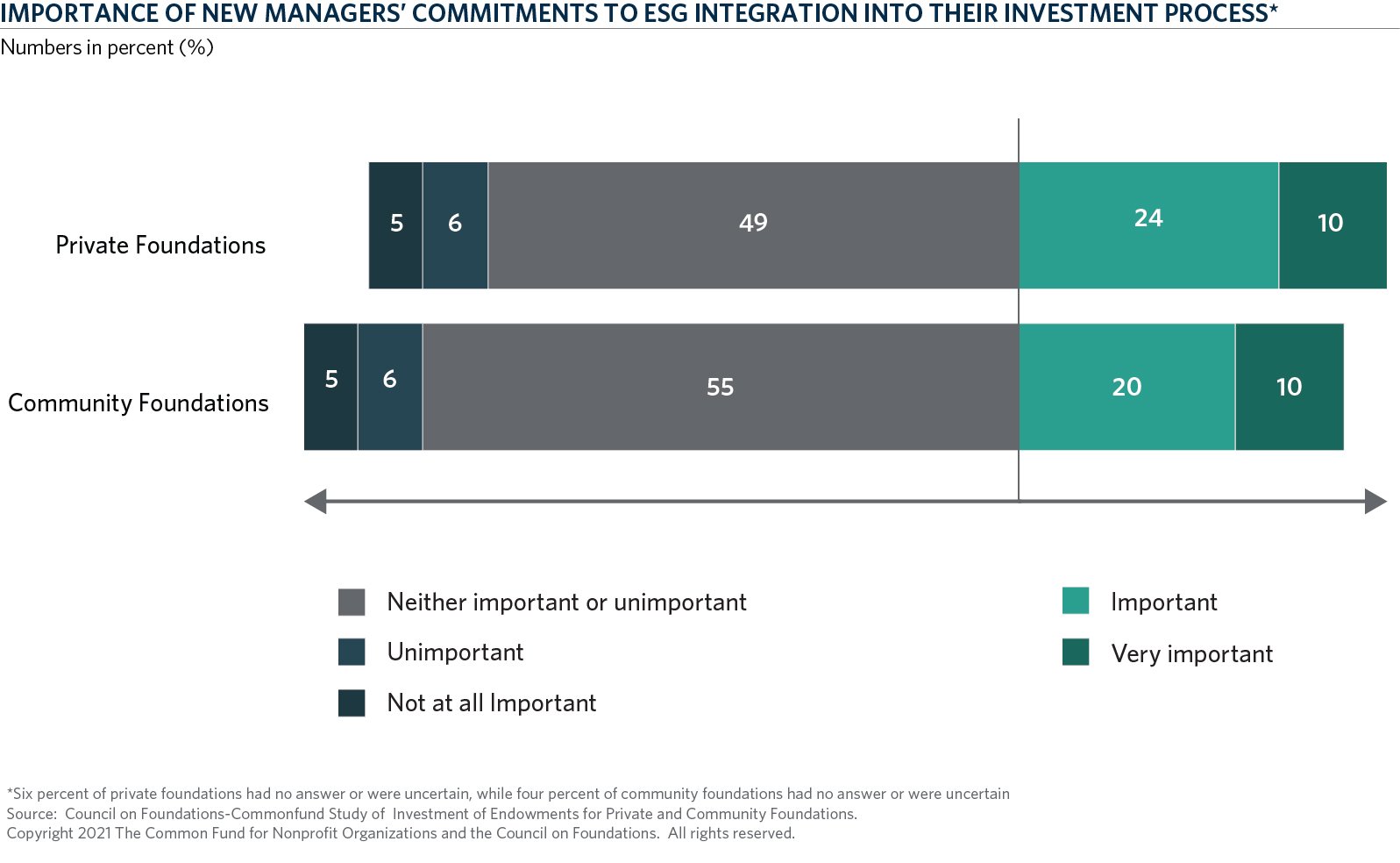 Data indicate that responsible investing is growing and gathering momentum among foundations participating in this year’s CCSF. Looking back at previous Studies, in fact, it has been that way for five-plus years. But it is important to note that growth rates have been uneven and trends in three principal forms of responsible investing are very different:

To these points, the Study for 2014 was the earliest to ask the question about currently required/permitted responsible investing practices worded in such a way as to allow comparison to the 2020 Study. The findings are shown in the following chart. 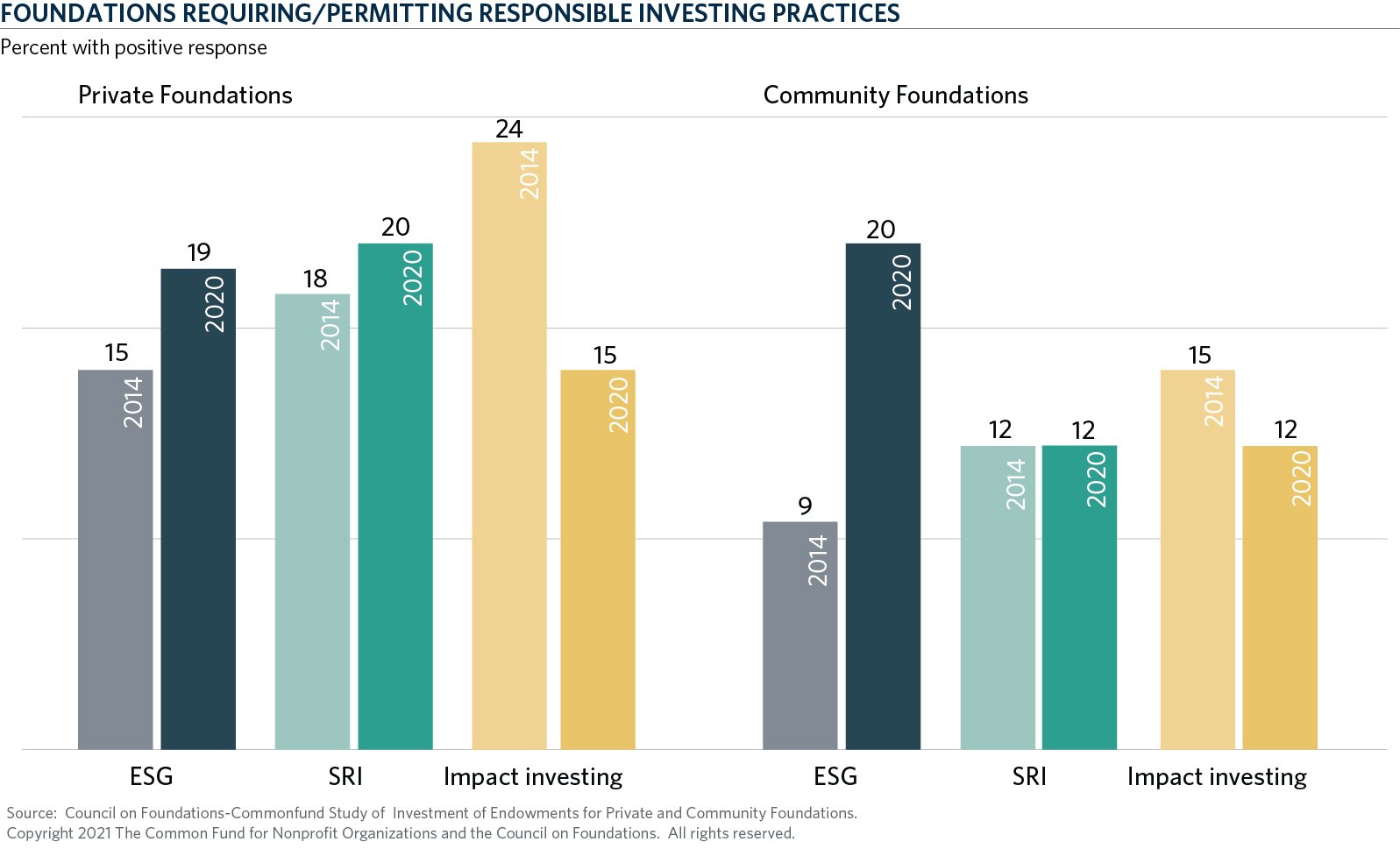 Rates at which impact investing is required or permitted declined across the size/type spectrum except for private foundations with assets under $101 million, where it was unchanged.

An important note: Changes over the period between 2014 and 2020 do not graph in a straight line as rates of adoption may rise or fall moderately (or stay level) from year to year. But viewed over time, the trend comes into focus.

ESG is the “youngest” of these three approaches and the one that is evolving most rapidly. Earlier challenges are being addressed, for example, the relative lack of standards and consistent data. But institutional investors increasingly appear to agree that good governance, a commitment to sustainability and recognition of stakeholders’ interests are major factors in companies’ long-term prospects.