In recent years, responsible investing has received mounting levels of attention from all quarters of the investment management field, from institutional investors large and small to global asset managers to reporting and analytical service providers, not to mention organizations whose mission it is to promulgate responsible investing. Many of their comments and study results have found their way into the media, keeping the industry’s attention riveted on the subject and raising visibility among the investing public.

Responsible investing is not new. In the U.S., its roots go back to the colonial era and a century ago (1921) the first mutual fund to screen out investments in tobacco, alcohol and gambling began operations. In the 1960s, socially responsible investing, or SRI, surfaced in powerful movements that included civil rights, the environment, feminist issues and anti-war protests. The 1970s and ‘80s saw a focus on environment (e.g., chemicals seeping into Love Canal in Buffalo, New York, and the Exxon Valdez oil spill) and apartheid in South Africa. In this century, malfeasance in governance was the focus of cases like WorldCom and Enron that led to the passage of the Sarbanes-Oxley Act in 2002. In part because of the widespread adoption of the Principles for Responsible Investment—originally promulgated by the United Nations—responsible investing has become a global initiative. Melting icecaps, plastics ingested by fish and fires in Australia keep topics related to responsible investing in the media on a daily basis.

Responsible investing has broadened its scope from the days when screening out or prohibiting certain investments deemed to be inconsistent with institutional mission was the primary tool for expressing social concerns. Today, implementing environmental, social and governance criteria, or ESG, gives investors a more flexible way to integrate responsible investing into their investment policies. (See the accompanying sidebar for definitions of the most widely-practiced approaches to responsible investing.)

Among the metrics underscoring the growth of responsible investing, assets managed in accord with responsible investment principles is frequently cited. This figure, according to Bloomberg.com, grew to $30.7 trillion in 2019.

Socially responsible investing (SRI): A portfolio construction process that attempts to avoid investment in certain stocks or industries through negative screening according to defined ethical guidelines.

Impact investing: Investment in projects, companies, funds or organizations with the express goal of generating and measuring mission-related economic, social or environmental change alongside financial return.

Environmental, social and governance (ESG): An investment practice that involves integrating the three ESG factors into fundamental investment analysis to the extent that they are material to investment performance.
Divestment of fossil fuel: A type of exclusionary screening strategy through which investors actively exclude companies involved with fossil fuels from their investment portfolio.

Diverse/Minority managers: An active effort to identify and invest with women and minority managers investing in equities, fixed income and credit, private equity and venture, real estate and hedge funds. Diverse managers are defined as firms with 33 percent or more ownership by women, people of black or African American, Latino/Hispanic, Asia, Native American or Pacific Islander descent, veterans and/or people with disabilities.

In its various studies of the investment management and governance policies and practices of nonprofit schools, Commonfund Institute has inquired about the adoption of responsible investing. This year, for the first time, we included a suite of questions about this topic in this study.

What we found is that responsible investing is a presence in the endowment management policies of many independent schools, but those actively practicing it remain a distinct minority. This is consistent with what we have found in Benchmarks Studies of other markets in the nonprofit sector—foundations and nonprofit healthcare organizations, for example—although rates of adoption can and do vary widely among individual schools.

Figure VP.1 is representative of the current status of responsible investing among independent schools. Among all participants in the 2019 CSIS: 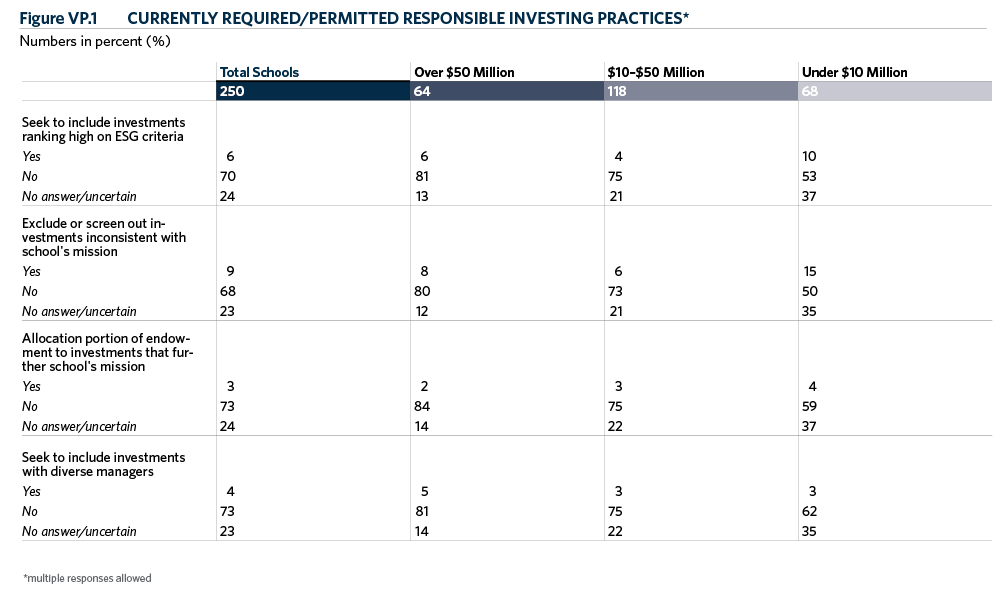 Figure VP.1 shows some variability among the size cohorts, as is to be expected. For example, 10 percent of schools with assets under $10 million say they seek to include investments ranking high on ESG criteria, roughly two times greater than the other size cohorts. These smaller schools also exclude or screen out investments that are inconsistent with institutional mission at a greater rate than the other two size cohorts. But they are the only two areas in which the rate of adoption of some form of responsible investing reaches the double-digit threshold.

Another point of inquiry reveals a situation that has been found in other studies: Namely, that while an official policy action may have been taken by relatively few independent schools, a larger percentage of boards or committees have actively discussed responsible investing. As Figure VP.2 shows, 23 percent of participating independent schools say they have discussed ESG and/or SRI. The figure is lower for impact investing, at 9 percent, and for investing with diverse managers, at 12 percent. And, once again, the frequency with which these topics are discussed by trustees varies across the size cohorts. But responsible investing is clearly an ongoing topic of discussion.

Fossil fuel divestment is a topic that receives media coverage, especially on some college campuses in the form of student protests or various student/faculty resolutions calling for divestment, with such actions often be driven by the need to combat global warming. However, data gathered in the 2019 CSIS show this subject is seemingly receiving little attention among independent schools. 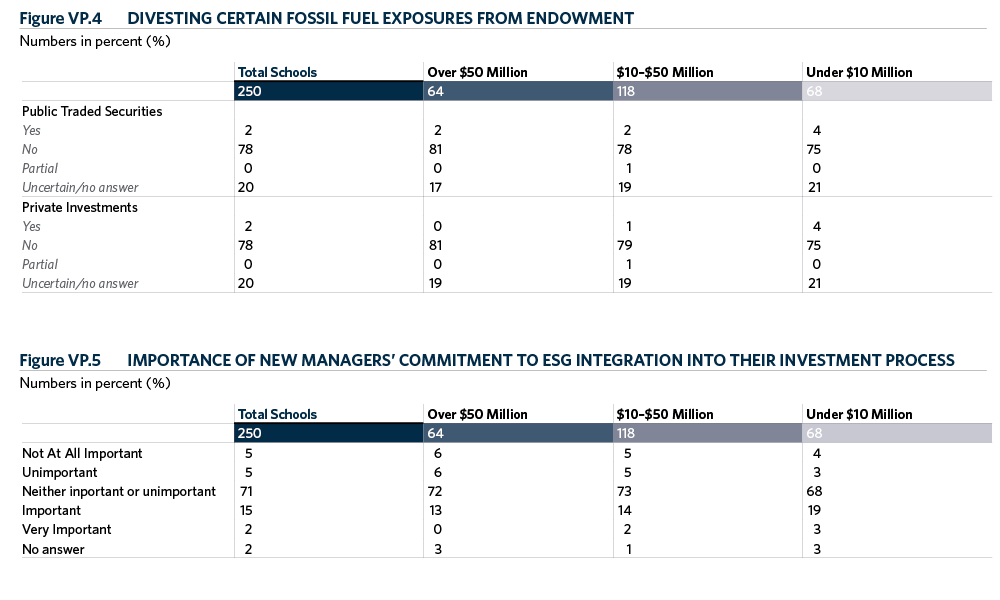 Responsible investing practices are increasingly making their way into the investment policies and practices of nonprofit schools, but the rate of formal adoption seems tepid. As is true in other areas of the nonprofit sector, independent school investment committees are discussing the topic and we expect this will continue. The entire field of responsible investing is maturing rapidly, however, and challenges of the past are being addressed; these include a lack of standards, added complexity in reporting, the lack of investment vehicles needed to provide acceptable portfolio diversification and empirical evidence that potential returns are not being negatively impacted.