A New Chapter for the Economy

A new chapter. Moving forward. The re-opening. No matter how it is described, the first quarter of 2021 marked a turning point after a challenging 2020. Since January, the key driver of the economy—but perhaps more importantly, of public sentiment—has been the aggressive distribution and acceptance of the COVID-19 vaccines. The large-scale efforts to vaccinate the public quickly and equitably have reinforced the belief that the lockdowns of the previous year are abating. Some states have been quicker to “open” than others, but the United States remains a leader amongst developed economies with its vaccination program.

The 1st quarter of 2021 was also bolstered by yet another stimulus bill. In early March, President Joe Biden signed a $1.9 trillion COVID relief bill that included direct payments to consumers, extended the $300 per week unemployment insurance supplement, expanded the child tax credit and funded vaccine distribution. At the onset of the crisis, efforts made to stabilize the economy were largely focused on large corporations and the financial markets. The most recent relief bill targeted “Main Street” and the economic impact of the crisis on a micro level. It also further strengthened household balance sheets reinforcing a key component of the post COVID-19 economic revival. As of the end of February, the U.S. personal savings rate as a percentage of disposable income was 13.6 percent, far above the historical average. However, the consumer won’t be alone in driving economic growth this year. As the economy gradually moves past the pandemic, corporate capital expenditures will be propelled by strong tailwinds including the large fiscal stimulus boosting domestic demand, stronger global activity supporting exports, and rising oil prices encouraging energy investment. 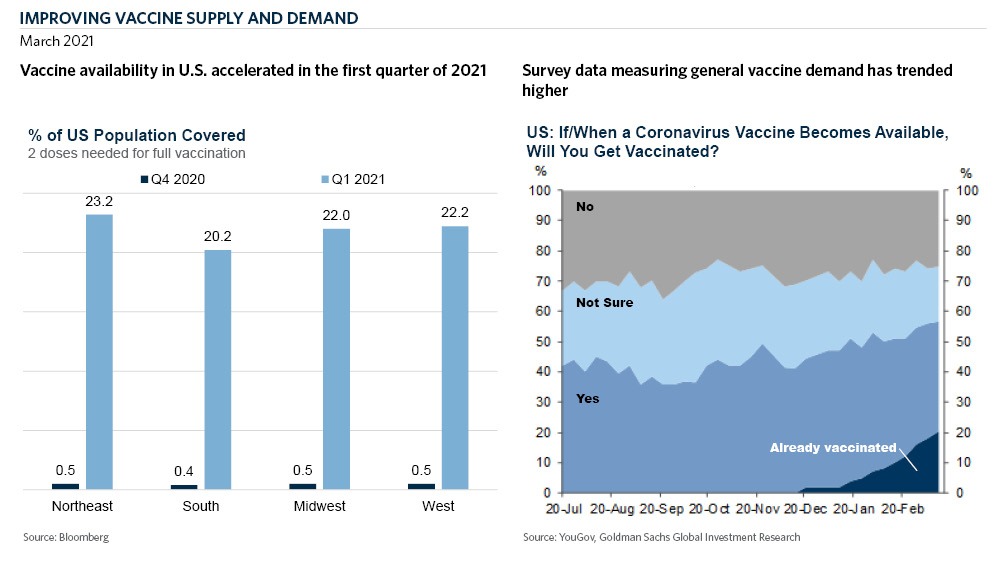 Domestically, the economic data improved after a lull in the 4th quarter of 2020. After negative jobs growth in December, the U.S. economy added jobs every month in 2021, averaging 539,000 new jobs per month in the first quarter, with the unemployment rate moving to 6.0 percent. This average was driven higher by the huge employment report from March, but the trend grew stronger every month regardless and a litany of measures reflected the improving outlook. U.S. consumer sentiment also continued to improve in late March to a one-year high as more Americans got vaccinated and restrictions eased in many states. The University of Michigan’s final sentiment index increased to 84.9. The gauge of current conditions rose to 93 from a February reading of 86.2. The monthly advance in the outlook was the biggest since April 2009. Consumer confidence is one of the fundamental economic indicators that have proven to be useful in monitoring market uptrends, especially in long cycles. Spending and incomes are poised to surge in March as $1,400 direct payments are distributed to millions of Americans.

The capital market produced mixed results in the 1st quarter. Equities continued to rise, building on the momentum from last year but also propelled by the prospects of a strong earnings recovery in the coming quarters. As a precursor to what is expected to be a very strong year of corporate profitability, companies in the S&P 500 finished 2020 with earnings growth of 5.2 percent in the 4th quarter. These gains were primarily driven by improvements in the material, financials, and information technology sectors. Conversely, the fixed income markets struggled throughout the first quarter as expectations for better growth and accelerating inflation pushed longer maturity U.S. Treasury yields higher. We expect inflation will trend higher in the coming months, but this will largely be due to last year’s negative inflation data dropping from the annual calculations, thus being a temporary increase. However, inflation fears aren’t going away, driven by the base effect, rising input prices, re-openings, and unprecedented stimulus. The implication is that interest rates could continue to grind higher. Warren Buffet lamented in the Berkshire Hathaway annual letter, “Fixed-income investors worldwide—whether pension funds, insurance companies or retirees—face a bleak future.”

The Federal Open Market Committee (FOMC) remains committed to let inflation run over two percent. Chairman Powell underscored that the “...fundamental change in our framework means we’re not going to act preemptively based on forecasts. We’re going to wait to see actual data.” That summed up the whole March FOMC meeting. Stronger economic growth forecasts, higher inflation forecasts, lower unemployment forecasts—all accompanied with a commitment to let them run on. As such, the meeting yielded few surprises, maintaining the glide path for both rates and asset purchases established last year and showing little sign of altering its trajectory anytime soon. In addition to leaving the policy rate on hold at 0.00-0.25 percent and the pace of asset purchases unchanged at $120 billion per month, the FOMC made minimal adjustments to the post-meeting policy statement.

Broader Europe continues to lag the U.S. in terms of recovery. Economic indicators will doubtless continue to outperform in the U.S. as European investor sentiment continues to sink. For sentiment to shift overseas there will have to be a substantial acceleration in vaccinations and a decline in COVID-19 cases coupled with upside surprises in economic data and a less dovish ECB. However, this is not the case throughout the rest of the world. For example, Norway’s central bank held its main policy rate at its most recent meeting but signaled an earlier lift-off given signs of a faster economic recovery. China has also moved toward the other end of the fiscal accommodation spectrum and has been actively trying to reign in lending activity with the objective of steady growth and the avoidance of creating market “bubbles” that were emblematic of the recovery from the Great Recession over a decade ago.

As we approached quarter end, many major stock indices were at all-time new highs as the historic rebound from the market sell-off one year ago continued. It may be unrealistic for the outsized gains in risk assets to persist but with corporate earnings accelerating, strong fiscal and monetary stimulus and pent up demand there are plenty of tailwinds to drive the markets higher. The easing of restriction and resulting increase in mobility will increase growth in global economies, however, they will not be in lock-step. As the year progresses, the domestic economy will feel the impacts before developed international and emerging nations. Nonetheless, we are confident that, if the current progress is sustained, the re-opening of the global economy will continue to support economic growth and markets.