In his first 100 days as President of the United States, Joe Biden has introduced three domestic funding proposals, totaling close to $6.0 Trillion, reflecting a desire to enhance the role of the Federal government while attempting to bring change to the economy’s perceived weaknesses and inequalities.

In the last week of April, the President detailed a collection of spending increases and tax cuts, seeking to expand access to education, reduce the cost of childcare and support women in the work force. While some details remain vague, the American Families Plan includes $1.0 Trillion in new spending and $800 Billion in tax credits and is expected to be paid by boosting tax revenue through rate hikes and increased enforcement against wealthier tax evaders. Together with the American Jobs Plan which is Mr. Biden’s infrastructure initiative, and the American Rescue Plan which included direct payments to consumers, extended unemployment insurance benefits and support for vaccine distribution, the massive spending by the U.S. government is expected to keep the budget deficit as percent of GDP at record highs in 2021 before declining in 2022 and 2023.

In this chart of the month, we show that on average, the budget deficit per data from the Congressional Budget Office was around 3.3 percent of nominal Gross Domestic Product for the last 40 years. In March 2021, the budget deficit reached $660 Billion, the third highest monthly deficit on record, surpassed only by the gaps of $864 Billion and $738 Billion in June and April last year, respectively. As a result of this unprecedented government support, consumers have mostly withstood the effects of the pandemic while also increasing the average personal savings rate as a percent of disposable income to 27.6 percent, significantly above the 9.1 percent average since the 1940s. U.S. personal incomes also soared by 21.1 percent in March – the most in monthly records since 1946. Meanwhile, GDP growth accelerated to an annualized rate of 6.4 percent driven by a massive 10.7 percent growth in consumption.

While investors expect another round of fiscal stimulus to be passed, it may not be smooth sailing. It was easy to vote in favor of sending money to people immediately in the midst of a pandemic, but fiscal conservatives will have concerns about raising taxes and funding massive infrastructure spending that will take many years to produce the promised benefits. As a result, we expect that there will have to be a compromise on the White House’s current proposal for it to pass the Congress. At Commonfund, we maintain a cautiously optimistic point of view with respect to growth assets as the economy reopens and the Federal Reserve continues to target full employment. However, we remain vigilant about the potential negative impact of Biden’s proposal to increase corporate tax rates and to nearly double the U.S. capital gains tax. 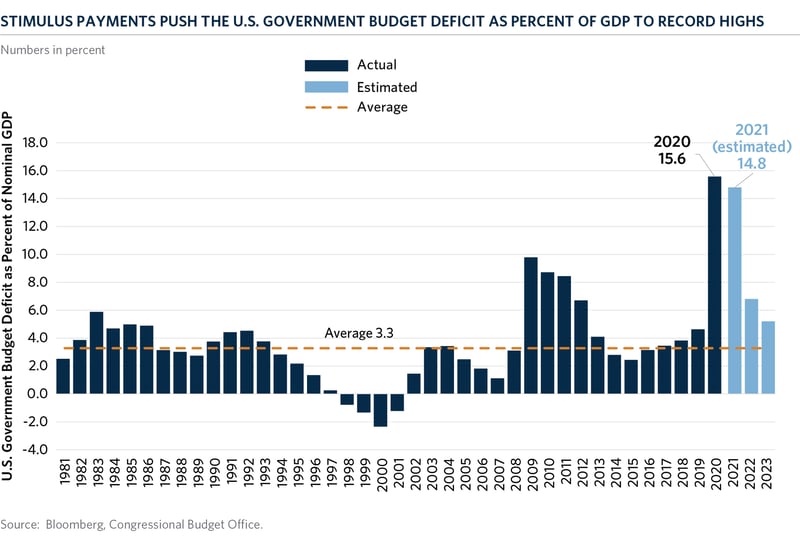