The Economy and Markets March On

The overhang of a U.S.-China trade war has weighed on the risk markets all year. Despite this, equity market returns have been strong in 2019 and the recent news of a “Phase 1” trade deal being negotiated has propelled the S&P 500 to its best returns since 2013. The movement towards a trade deal may also be a sign that the world’s second largest economy, China, may be struggling to maintain its growth momentum. China announced its third quarter GDP growth was six percent. This once again raised questions about what the real number is as it is clear that the sum of the parts doesn’t equal the whole. Ultimately, it is a manufactured number and investors should focus on the trend. China is slowly guiding down GDP growth and it would not be surprising to see it in the mid five percent range in the future.

Domestically, the Federal Open Markets Committee (FOMC) has done its part to maintain the current growth trend by aggressively cutting the benchmark Fed Funds rate over the last few months. In three of the last four meetings the committee has cut rates by 25 basis points, from an upper bound target of 2.50 percent to a new target of 1.75 percent. The impact on savers can be seen quickly in the form of lower money market, savings account and certificates of deposit rates on offer by banks. Otherwise, there hasn’t been a material change in the current economic data, which is not uncommon. There is rarely an immediate impact from FOMC action, unless it is an unexpected development. In fact, there is typically a 6 to-12-month lag before the impact of FOMC action is felt, so the current data more likely reflects the vestiges of the last rate hikes in September and December of 2018.

We see a few weaker data points in what is otherwise a steady domestic economy. Third quarter corporate earnings reports are in-line with expectations, but lower year-over-year energy prices have resulted in weakness in the energy and materials sectors and weighed on aggregate domestic earnings growth. The outsized impact of these two sectors has overshadowed high single-digit growth in other sectors of the market including real estate, telecom and healthcare.

Recent employment data remains resilient despite downdrafts from the GM strike and layoffs related to 2020 census workers. The labor data continue to corroborate a moderation in the pace of economic activity in the latter half of the year, but the pace of hiring signals that growth is cooling, not collapsing. Nonfarm payrolls increased 128,000 in October, following a 180,000 gain in September. After revisions, the average pace of job gains in the last three months was 176,000 compared to 163,000 in the first six months of the year.

Finally, the third quarter estimate of real GDP exceeded expectations at 1.9 percent. The overall growth number was almost totally driven by the 2.9 percent growth in consumer spending. Assuming no revisions, real GDP would have to be 1.6 percent in the fourth quarter to achieve the Fed’s target of 2.2 percent for the year. A stronger than expected real GDP report seems to run counter to the recent ISM data but in fact it tells the same story – manufacturing isn’t the key economic driver at this point in the economic cycle. The ISM manufacturing data (48.3) is below 50, which is typically interpreted as recessionary but the ISM non-manufacturing (54.7), while lower than last year, is still well above cautionary levels. As seen in the chart below, similar episodes of ISM weakness in 2012 and 2015 did not result in GDP dipping into recessionary levels. 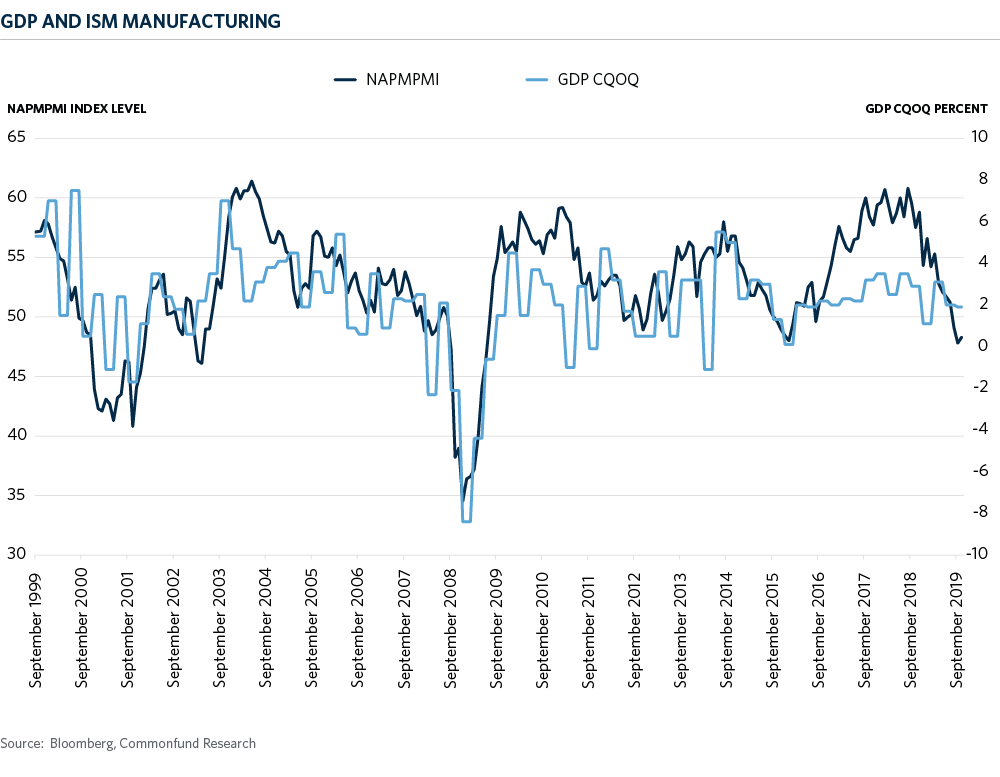 There is little doubt the FOMC has changed its posture regarding current monetary policy.  The committee’s altered language in its statement suggests there may be a pause after its quick succession of accommodative interest rate moves, but the statement also highlighted the positive condition of the U.S. economy. The repeated reference to “uncertainties’’ in the economic outlook is more a reflection of the geopolitical uncertainties facing the domestic economy and likely should be interpreted as a precautionary sign to keep the longest period of domestic growth on record going just awhile longer.