Chairman Powell’s speech at Jackson Hole during the last week of August confirmed the Fed’s dovish policy stance, giving investors ample support in terms of low rates and a flexible inflation targeting framework that will allow the labor market to run hotter.

While the Fed did not provide any concrete answers on how it plans to push inflation higher, the old adage of “Don’t Fight the Fed” has worked well for investors over the past few months. Achieving an average rate of inflation of 2 percent from current low levels will require monetary policy to be loose enough to push inflation levels above that target. As a result, the U.S. 5-year forward 5-year inflation swap rose above 2 percent for the first time since Covid-19 began to impact the global economy. Higher market-based inflation expectations have helped boost real inflation prospects in the U.S. and the Eurozone, driving real yields further down. In fact, inflation expectations in the U.S. have surpassed those in the Europe, causing the real yield on 5-year U.S. Treasuries to fall below that of German bunds for the first time since 2013. We continue to believe that inflation will remain lower for longer due to the weak economy, tightening lending standards and low industrial capacity utilization. At the same time, declining U.S. real yields relative to the rest of the world have weakened the U.S. dollar, with the spot dollar index (DXY) falling by 9.8 percent since its high on March 20th this year, giving a boost to commodities and safe-haven assets like gold. 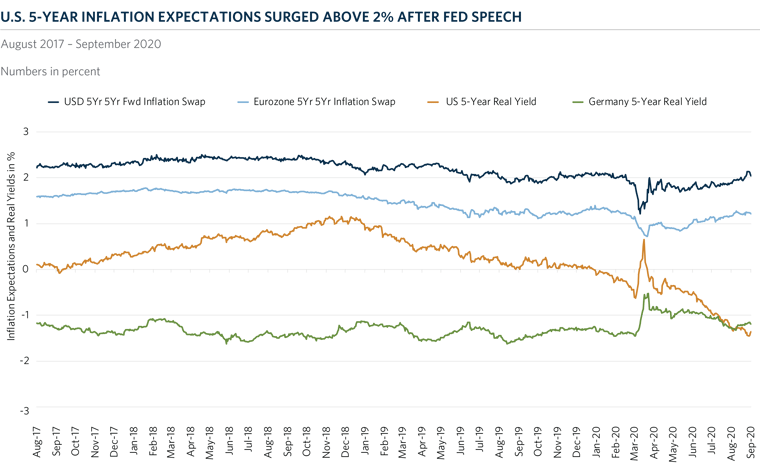