Real Estate Takes a Hit from the Fed

In this chart of the month, it is commonly cited that monetary policy tightening has a lagged impact on economic activity. However, as the Federal Reserve drives the cost of capital higher, the impact on different drivers of domestic economic growth do not all react in concert.

As monetary conditions become more restrictive, the effects of these actions on employment, corporate earnings, manufacturing, and housing will vary over time. In 2022, broad housing data has made it clear that it is the first victim of the rate hike cycle.

Housing's combined contribution to GDP generally averages 15 to 18 percent and occurs in two basic ways. First is residential investment, which averages roughly 3 to 5 percent of GDP, and includes construction of new single-family and multifamily structures, residential remodeling, production of manufactured homes, and brokers' fees. The second is consumption spending on housing services, another 12 to 13 percent of GDP, which includes gross rents and utilities paid by renters, as well as owners’ imputed rents and utility payments. Fluctuations in the housing market, particularly prices, can have broader effects on consumption known as “wealth effects”. An increase in housing values encourages homeowners to spend more than they do at other times for a variety of reasons, namely higher confidence in the economy, increased home equity for homeowners to borrow against, and higher rental income. A decrease in prices results in the opposite. In the United States, consumer spending makes up roughly 70 percent of the economy; therefore, changes in housing wealth can result in significant changes in economic growth.

Housing data has been in a significant decline year-to-date, ranging from new and existing home sales to home builder sentiment to mortgage activity. Perhaps the most impactful data point with respect to the “wealth effect,” has been the precipitous decline in home values as measured by the S&P CoreLogic Composite Home Price Index (pictured in the chart), which recently printed its largest monthly decline since 2011. 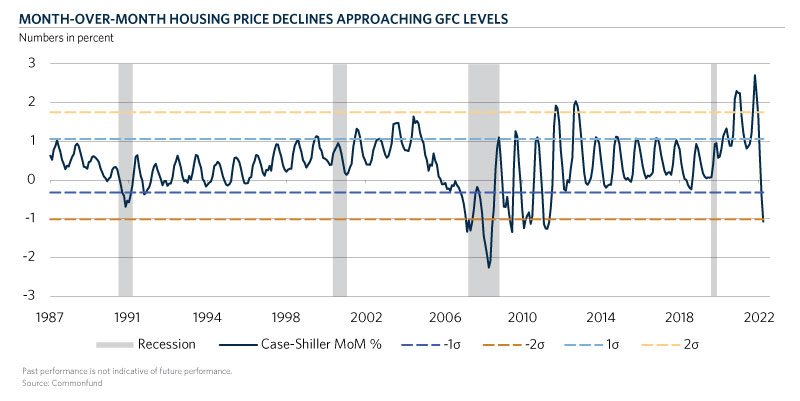 U.S. homebuilder sentiment has tumbled by the most since the immediate aftermath of the pandemic as firms faced higher materials costs and a slowdown in demand. The National Association of Home Builders/Wells Fargo gauge has fallen every month in 2022 and stands at the lowest level since May of 2020, as builders contend with sharply higher material and labor costs. Meanwhile, measures of current purchases, expected sales, and traffic of prospective buyers have all showed marked deteriorations. Homes have also become less affordable in recent months with mortgage rates reaching their highest level since 2009. In response, mortgage applications have declined by 65 percent on the year as of October 31st.

Although housing and real estate is only one driver of economic activity, the relatively large weight of the sector and the extensive secondary effects on consumption associated with owning a home can make it a significant detractor from domestic economic activity. As we move into the final months of the year, and the market impact of 375 basis points of rate hikes are absorbed, we do not expect a quick recovery in this portion of the economy.