Recession – Maybe This Time is Different

The July Federal Open Markets Committee (FOMC) meeting signaled the end of central bank rate normalization with the first rate cut in more than a decade. The last time the FOMC cut rates was in December 2008 and it was done in dramatic fashion as then Chairman Ben Bernanke announced a surprise 75 basis point rate cut after fears of a looming U.S. recession sent the equity markets into a tailspin. It wasn’t until seven years later that Chairman Yellen (5 hikes) and then Chairman Powell (4 hikes) embarked on a series of nine 25 basis point increases believing domestic growth was on sound footing.

This isn’t the first salvo in the growth reflation war. At the conclusion of the March 2019 FOMC meeting, the Federal Reserve issued updated guidance regarding its plans for the size of its securities holdings and the transition to the longer-run operating regime. The Committee stated its intent to slow the reduction of its holdings of U.S. Treasury securities by reducing the cap on monthly redemptions. However, in what came as a surprise to many, it was also announced that the balance sheet drawdown will end on August 1st.

Perhaps the preemptive easing of monetary policy is a necessary consequence of trade-related uncertainty and weaker than expected economic dataflow. The recent rally in global bonds pushed aggregate negative yielding sovereign debt above $11 trillion as of mid-June, a level not seen since October 2016. The figure was primarily driven by Eurozone countries, accounting for more than half the change, with the rest coming from Japan. This rate suppression has also brought more curve inversions and speculation that the “clock is ticking” on the traditional 12- to 18-month lag between curve inversion and recession. It remains to be seen, but there is precedent to support the case that a recession is not imminent given the current economic backdrop. Like the 1990’s, when the yield curve inverted three times (1995, 1998 & 2000) before a recession unfolded in 2001.

The table below compares the prevailing economic fundamentals prior to the last two recessions with the current state of the market across four categories – Valuations, Growth and Inflation, Interest Rates and Policy, and Consumer Health. 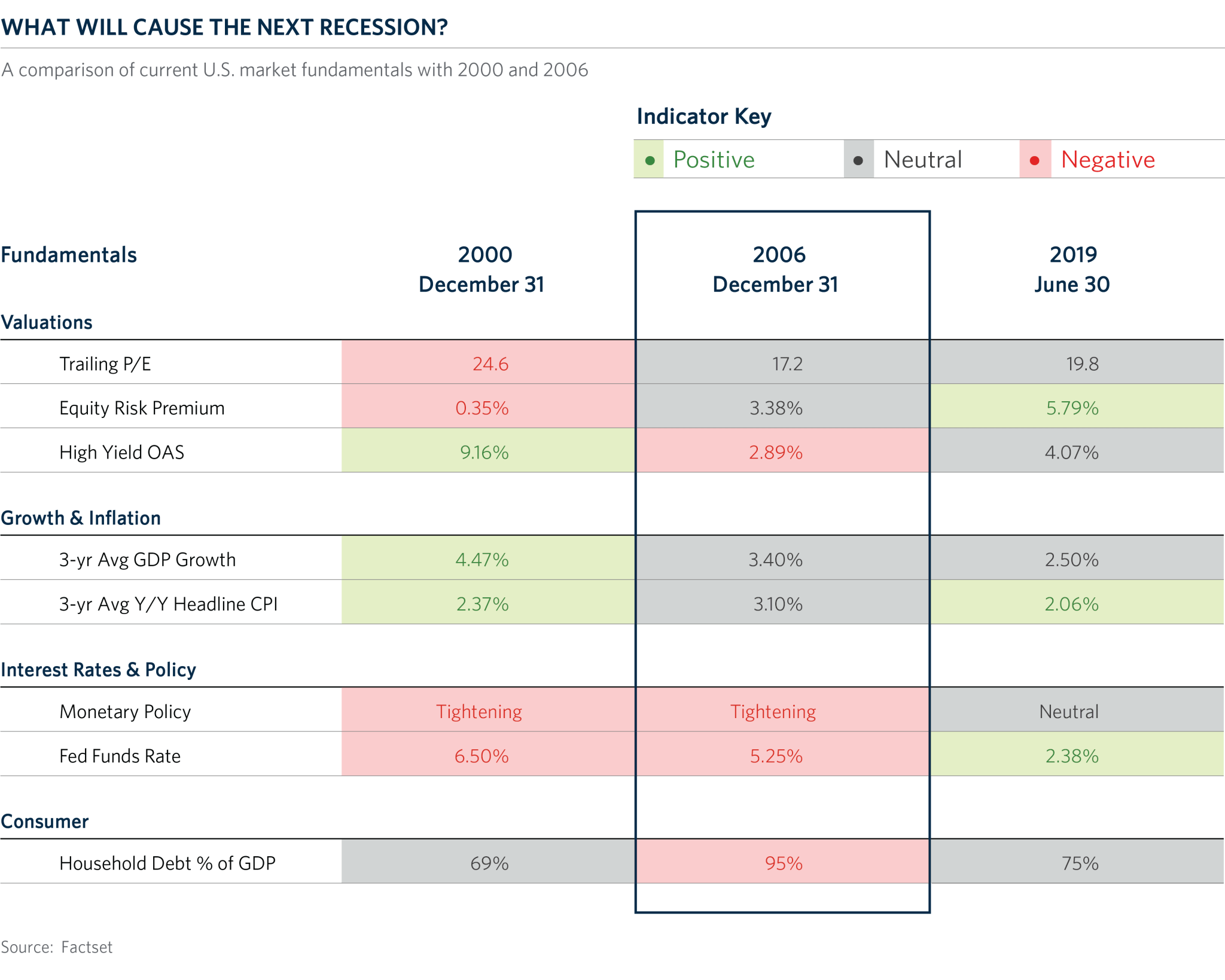 The historical pre-recession periods each had unique attributes that signaled potential issues. In 2000, equity valuations were extremely high and GDP growth averaged 4.85 percent over the preceding two years. Attempting to cool the economy, the FOMC undertook a very aggressive tightening path and increased the Fed Funds rate 200 basis points between June 1999 and May of 2000. This effectively stopped economic growth and the FOMC was forced to reverse its actions in January 2001 but by that point the recession was already baked in. In 2006, equity valuations were very close to current levels, but debt levels were sky high and there was an enormous amount of consumer leverage due to loose lending standards and unconventional debt and derivative instruments. This ultimately led to the Great Financial Crisis and the FOMC actions referenced earlier.

All of this begs the question of where the risks lie in today’s environment. As seen in the table, equity valuations are reasonable, corporate profits have grown and the current business environment incentivizes domestic investment. The current low rate environment makes equities and credit attractive from a potential return perspective (as seen in the Equity Risk Premium). Inflation is contained, and households aren’t over-levered by historical standards, so a consumer debt crisis probably isn’t lurking. It should be remembered that the current benign environment is in part due to the government’s willingness to shoulder the debt burden vis-à-vis a massive expansion of its balance sheet, a factor that doesn’t seem to be reversing anytime soon given the recent debt ceiling and budget deal that is projected to boost spending by $320 billion over the next two years.

Perhaps, while not immediately obvious, the prudent course of action is a near-term rate cut to stabilize growth. Ultimately, it may prevent the FOMC from having to reflexively change its interest rate policy in the face of crisis as has been all too common in the past. On the other hand, the FOMC may regret using one of the few tools they have in the kit if and when a recession does happen.